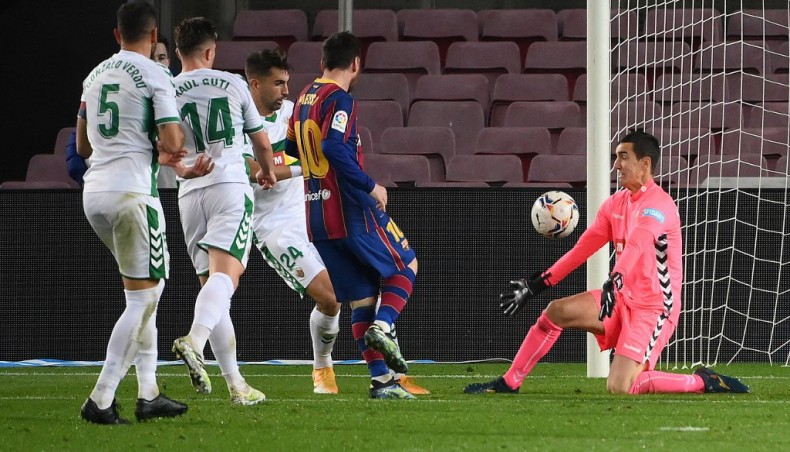 Lionel Messi soared past Luis Suarez to become La Liga's top scorer on Wednesday by adding his 17th and 18th goals of the season in a much-needed 3-0 victory for Barcelona over Elche.

Barca had followed up last week's crushing Champions League loss to Paris Saint-Germain by drawing at home to Cadiz on Sunday but eased the strain with a comfortable win at the Camp Nou.

Messi's double owed much to a pair of superb assists, with a supreme dribble by Frenkie de Jong coming after a sublime flick from Martin Braithwaite, who also set up Jordi Alba to score a third.

After failing to take full advantage of league leaders Atletico Madrid's defeat by Levante on Saturday, this victory puts Barcelona back in third, five points off the top, having played a game more than Atletico.

‘We cannot lose any more,’ said Ronald Koeman. ‘The problem was we were not good enough at the start and we have to win all the games now if we want to do something in the league.’

Even if Atletico prove too far ahead to catch, a positive performance was important, especially with a semi-final second leg to come next week against Sevilla in the Copa del Rey, which may be their only chance of winning a trophy this term.

Messi's return to top form comes as a huge boost too. The 33-year-old came off unfavourably in comparisons made with Kylian Mbappe last week but these kinds of performances show he is far from finished yet.

This was Messi's fifth and sixth goal in his last four games while no player from the top five European leagues has scored more than his 13 this year in all competitions. Bayern Munich's Robert Lewandowski is closest on 12.

‘When we talk about old players, that's not Leo,’ said Koeman. ‘His quality and his game is still impressive. There are old players and then there are players that have to make the difference.

‘He has shown again today that he is a very, very important player for this team.’

Francisco Trincao and Frenkie de Jong had early chances for Barcelona while Elche should have scored but Lucas Boye blazed over.

Yet a frantic opening gave way to a disjointed first half and Koeman reacted by bringing off the ineffective Miralem Pjanic at half-time and replacing him with Ousmane Dembele.

Barcelona scored within two minutes of the restart, Messi driving from midfield towards the area and rebounding off Braithwaite, whose sweeping flick behind his standing leg gave the scuttling Argentinian a simple finish.

The first came from a breathtaking run from De Jong, who dribbled forward from the halfway line, past three Elche defenders, before cutting back for Messi. He glided past two more and prodded in.

Messi started the move for the third, with a familiar, curving pass to Braithwaite at the back post, whose cushioned header across found Alba unmarked in the middle.