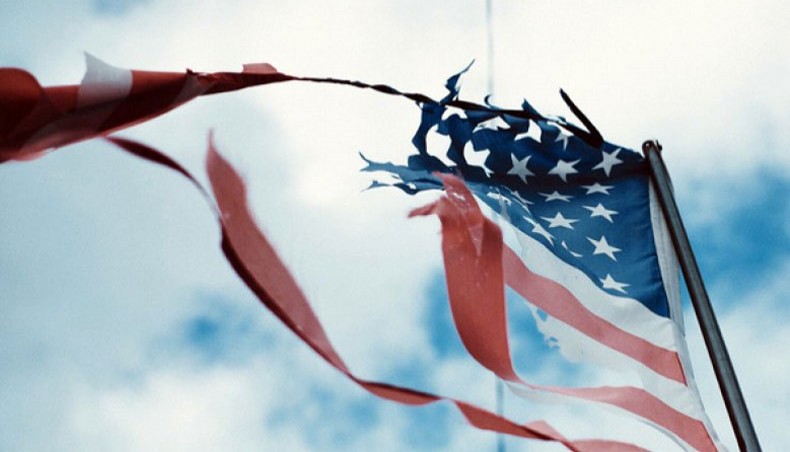 LIKE Gregor Samsa, the never-to-be-forgotten character in Franz Kafka’s story ‘The Metamorphosis,’ we awoke on January 7 to discover that we, too, were ‘a giant insect’ with ‘a domelike brown belly divided into stiff arched segments’ and numerous ‘pitifully thin’ legs that ‘waved helplessly’ before our eyes. If you prefer, though, you can just say it: we opened our eyes and found that, somehow, we had become a giant roach of a country.

Yes, I know, Joe Biden and Kamala Harris are now in charge and waving their own little limbs wildly, trying to do some of what needs to be done for this sad land of the disturbed, over-armed, sick, and dying. But anyone who watched the scenes of Floridians celebrating a Super Bowl victory, largely unmasked and cheering, shoulder to shoulder in the streets of Tampa, can’t help but realise that we are now indeed a roach nation, the still-wealthiest, most pandemically unmasked one on planet earth.

But don’t just blame Donald Trump. Admittedly, we’ve just passed through the Senate trial and acquittal of the largest political cockroach around. I’m talking about the president who, upon discovering that his vice-president was in danger of being ‘executed’ (‘Hang Mike Pence!’) and was being rushed out of the Senate as a mob bore down on him, promptly tweeted: ‘Mike Pence didn’t have the courage to do what should have been done to protect our country and our Constitution.’

Just imagine. The veep who had — if you don’t mind my mixing my creature metaphors here — toadied up to the president for four endless years was then given a functional death sentence by that same man. You can’t fall much deeper into personal roachdom than that. My point here, though, is that our all-American version of roacherie was a long time in coming.

Or put another way: unimaginable as the Donald might have seemed when he descended that Trump Tower escalator in June 2015 to hail his future ‘great, great wall,’ denounce Mexican ‘rapists,’ and bid to make a whole country into his apprentices, he didn’t end up in the Oval Office for no reason. He was the symptom, not the disease, though what a symptom he would prove to be — and when it came to diseases, what a nightmare beyond all imagining.

Let’s face it, whether we fully grasp the fact or not, we now live in a system, as well as a country, that’s visibly in an early stage of disintegration. And there lies a remarkable tale of history happening at warp speed, of how, in not quite three decades, the USS enterprise of imperial powers was transformed into the USS roach.

Once upon a time on earth

RETURN for a moment to 1991, almost two years after the Berlin Wall fell, when the Soviet Union finally imploded and the Cold War officially ended. Imagine that you had been able to show Americans then — especially the political class in Washington — a 13-minute video of Trump statements and tweets interlarded with mob actions in the Capitol that the Democratic House impeachment managers used in their opening salvo against the former president. Americans — just about any of us — would have thought we were watching the most absurd science fiction or perhaps the single least reality-based bit of black comedy imaginable.

In the thoroughly self-satisfied (if somewhat surprised) Washington of 1991, the triumphalist capital of ‘the last superpower,’ that video would have portrayed a president, an insurrectionary mob, and an endangered Congress no one could have imagined possible — not in another nearly 30 years, not in a century, not in any American future. Then again, if in 1991 you had tried to convince anyone in this country that a walking Ponzi scheme(r) like Donald Trump could become president, no less be impeached twice, you would have been laughed out of the room.

After all, this country had just become the ultimate superpower in history, the last one ever. Left alone on this planet, it had a military beyond compare and an economy that was the heartland of a globalised system and the envy of the world. The earth was — or at least to the political class of that moment — ours for the taking, but certainly not for the losing, not in any imaginable future. The question then wasn’t keeping them out but keeping us in. No ‘big, fat, beautiful walls’ were needed. After all, Russia was a wreck. China was still emerging economically from the hell of the Maoist years. Europe was dependent on the United States and, when it came to the rest of world, what else need be said?

This was an American planet, pure and simple.

In retrospect, consider the irony. There had been talk then about a post-Cold War ‘peace dividend.’ Who would have guessed, though, that dividends of any sort would increasingly go to the top one per cent and that almost 30 years later this country would functionally be a plutocracy overseen until a month ago by a self-professed multibillionaire? Who would have imagined that the American version of a peace dividend would have been siphoned off by more billionaires than anyplace else on earth and that, in those same years, inequality would reach historic heights, while poverty and hunger only grew? Who would have guessed that whatever peace dividend didn’t go to the ultra-wealthy would go to an ever-larger national security state and the industrial complex of weapons makers that surrounded it? Who would have guessed that, in the official post-Cold War Washington, peace would turn out to be the last thing on anyone’s mind, even though this country seemed almost disarmingly enemy-less? (Remember when the worst imaginable combination of enemies, a dreaded ‘axis of evil,’ would prove to be Iraq, Iran, and North Korea, all embattled, distinctly tertiary powers?)

Who would have guessed that a military considered beyond compare (and funded to this day like no other) would proceed to fight war after war, literally decades of conflict, and yet — except for the quasi-triumph of the first Gulf War against Saddam Hussein’s Iraq — achieve victory in none of them? Staggering trillions of taxpayer dollars would be spent on them, while those billionaires were given untold tax breaks. Honestly, who would have guessed then that, on a planet lacking significant enemies, Washington, even six presidents later, would prove incapable of stopping fighting?

Who would have guessed that, in September 2001, not Russia or communist China, but a tiny group of Islamic militants led by a rich Saudi extremist the US had once backed would send 19 (mostly Saudi) hijackers to directly attack the United States? They would, of course, cause death and mayhem, allowing president George W Bush to launch an almost 20-year ‘global war on terror,’ which still shows no sign of ending. Who would have guessed that, in the wake of those 9/11 terror attacks, the son of the man who had presided over the first Gulf War (but stopped short of felling Iraqi autocrat Saddam Hussein) and the top officials of his administration would come to believe that the world was his oyster and that the US should dominate the Greater Middle East and possibly the planet in a way previously unimaginable? Who would have imagined that he would invade Iraq (having done the same in Afghanistan a year and a half earlier), effectively helping to spread Islamic extremism far and wide, while creating a never-ending disaster for this country?

Who would have guessed that, in 2009, in the wake of a great recession at home, the next president, Barack Obama, would order a massive ‘surge’ of forces into Afghanistan, a war already eight years old? Tens of thousands of new troops, not to speak of contractors, CIA operatives, and others would be sent there without faintly settling things.

By November 2016, when an antiquated electoral system gave the popular vote to Hillary Clinton but put Donald Trump, a man who promised to end this country’s ‘endless wars’ (he didn’t) in the Oval Office, it should have been obvious that something was awry on the yellow brick road to imperial glory. By then, in fact, for a surprising number of Americans, this had become a land of grotesque inequality and lack of opportunity. And many of them would prove ready indeed to use their votes to send a message to the country about their desire to Trump that very reality.

From there, of course, with no wizard of Oz in sight, it would be anything but a yellow brick road to January 6, 2021, when, the president having rejected the results of the 2020 election, a mob would storm the Capitol. All of it and the impeachment fiasco to follow would reveal the functional definition of a failing democracy, one in which the old rules no longer held.

Exiting the superpower stage of history

AND, of course, I have yet to even mention the obvious — the still-unending nightmare that engulfed the country early in 2020 and that, I suspect, will someday be seen as the true ending point for a strikingly foreshortened American century. I’m thinking, of course, of COVID-19, the pandemic disease that swept the country, infecting tens of millions of Americans and killing hundreds of thousands in a fashion unmatched anywhere else on the planet. It would even for a time fell a president, while creating mayhem and ever more fierce division in unmasked parts of the country filled with civilians armed to the teeth, swept up in conspiracy theories, and at the edge of who knew what.

Call it a sign from the gods or anything you want, but call it startling. Imagine a disease that the last superpower handled so much more poorly than countries with remarkably fewer resources. Think of it as a kind of judgement, if not epitaph, on that very superpower.

Or put another way: not quite 30 years after the Soviet Union exited the stage of history, we’re living in a land that was itself strangely intent on heading for that same exit — a crippled country led by a 78-year-old president, its system under startling pressure and evidently beginning to come apart at the seams. One of its political parties is unrecognisable; its presidency has been stripped of a fully functioning Congress and is increasingly imperial in nature; its economic system plutocratic; its military still struggling across significant parts of the planet, while a possible new cold war with a rising China is evidently on the horizon; and all of this on a planet that itself, even putting aside that global pandemic, is visibly in the deepest of trouble.

At the end of Franz Kafka’s classic tale, Gregor Samsa, now a giant insect with a rotting apple embedded in its back, dies in roach hell, even if also in his very own room with his parents and sisters nearby. Is the same fate in store, after a fashion, for the American superpower?

In some sense, in the Trump and COVID-19 years, the United States has indeed been unmasked as a roach superpower on a planet going to — again, excuse the mixed animal metaphors — the dogs. The expected all-American age of power and glory hasn’t been faintly what was imagined in 1991, not in a country that has shown remarkably few signs of coming to grips with what these years have truly meant.

Centuries after the modern imperial age began, it’s evidently coming to an end in a hell that Joe Biden and crew won’t be able to stop, even if, unlike the previous president, they’re anything but intent on thoroughly despoiling this land. Still, Trump or Biden, at this point it couldn’t be clearer that we need some new way of thinking about and being on this increasingly roach-infested planet of ours.

TomDispatch.com, February 18. Tom Engelhardt created and runs the website TomDispatch.com. He is also a co-founder of the American Empire Project and a fellow of the Type Media Centre.