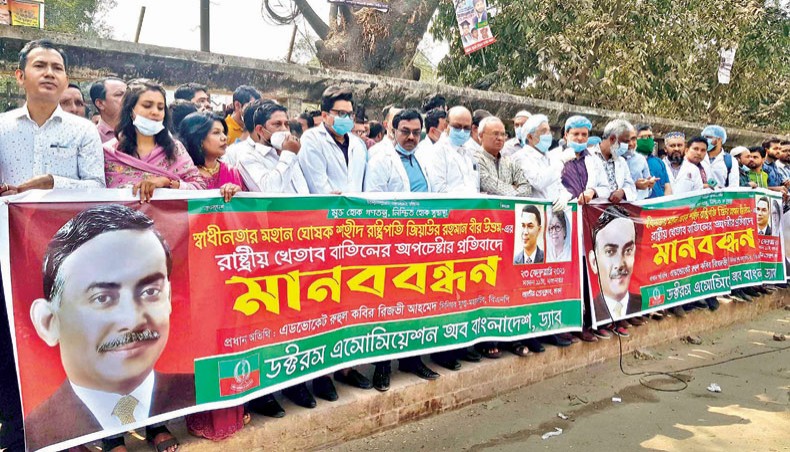 Doctors Association of Bangladesh organises a demonstration in front of the National Press Club in Dhaka on Tuesday protesting at the government move to revoke the Bir Uttam gallantry award of the late president Ziaur Rahman. — New Age photo

Speaking at a human chain formed by the Doctors’ Association of Bangladesh in front of the National Press Club in Dhaka, Rizvi said that the Awami League leaders did not participate in the War of Independence and they had no experience how the freedom fighters had fought inside the country against Pakistani occupation army and their collaborators.

The Doctors’ Association of Bangladesh formed the human chain protesting at the government initiative to revoke the Bir Uttam award of freedom fighter Ziaur Rahman.

Rizvi said that BNP founder and former president Ziaur Rahman was a valiant freedom fighter and the people, who were trying to revoke the gallantry award bestowed upon him, must face trials in the people’s court.

Presided over by DAB president Harun-al-Rashid, secretary general Abdus Salam, and BNP health secretary Rafiqul Islam, among others, spoke at the programme.