Protests on for univ reopening 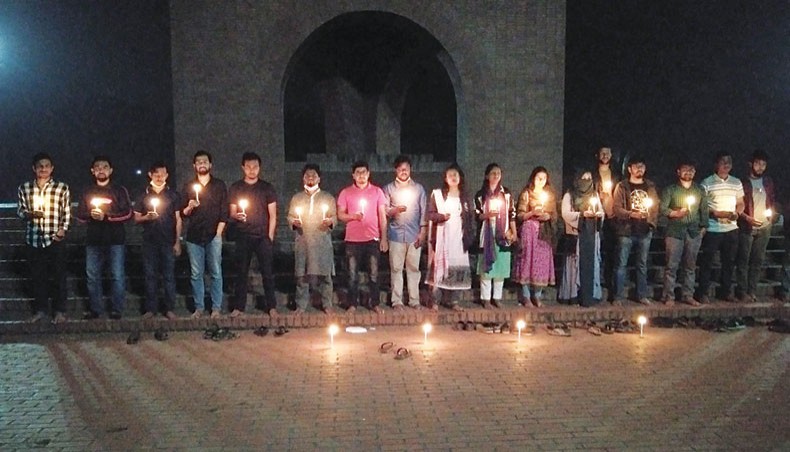 Jahangirnagar University students hold a candlelight vigil at the university Shaheed Minar at Savar in Dhaka on Tuesday in protest against the attack on students by a group of villagers. — New Age photo

Students of different public universities on Tuesday continued their protest programmes demanding immediate reopening of universities and residential halls after the government on Monday had announced that universities would remain closed till May 23.

‘We will declare a fresh programme only after the end of the ultimatum,’ said Junaid as DU vice-chancellor Md Akhtaruzzaman told reporters that the academic council in its meeting on Tuesday had decided  to close residential halls till May 16 and the university till May 23 following the government order.

‘The academic council decided to cancel its previous plan to reopen residential halls on March 13 following the government decision and the normal academic activities will resume only after the vaccination of students, teachers and other staff as per the government plan,’ Akhtaruzzaman said.

‘We hope that the students will respect the decision,’ he added.

At a rally in front of the National Press Club, the immediate past Dhaka University Central Students’ Union vice-president Nurul Haque Nur on Tuesday asked the government to immediately reopen all public universities and their residential halls.

Jahangirnagar University students have continued their protests till Tuesday night although the university authorities cancelled all examinations and vacated four residential halls from the possession of students who had broken into nine out of 16 residential halls on Monday, New Age JU correspondent reported.

Despite the deployment of an additional police contingent on the campus, protesters expressed determination to stay in the residential halls.

They also demanded that authorities should file cases against local thugs who on Friday had beaten and injured at least 50 students who used to stay in the rented houses in Geruya village near the JU campus.

They also demanded ensuring free treatment of the injured students.

JU hall provost committee president Motaher Hossain said that the provost committee along with the university authorities would continue to pursue students so that they vacate all residential halls by Tuesday night.

Islamic University students from a press conference on Tuesday gave a five-day ultimatum to the university authorities for reopening the campus and residential halls of the university, IU correspondent reported.

Students would break into the residential halls if their demands are not met by March 1, they warned.

Students staged demonstration on the campus for the third consecutive day.

Education minister Dipu Moni on Monday announced that universities would be reopened on May 24 and urged students to leave campuses until the reopening of universities.

Otherwise, she warned, universities and the law enforcing agencies would take actions as per the law and universities would not take responsibilities of any undesired incident.

‘We will allow students to enter halls on May 17,’ she said.

Universities have remained closed from March 18, 2020 for the COVID-19 outbreak.