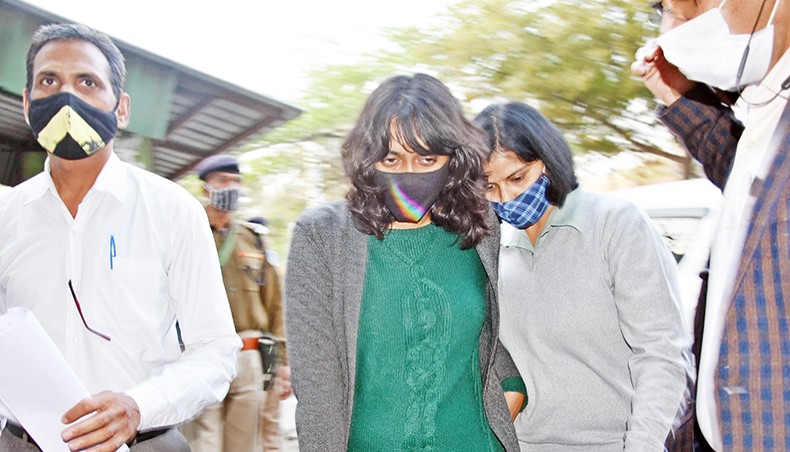 Environment activist Disha Ravi, centre, is escorted after being granted bail, outside Tihar jail in New Delhi on Tuesday following her arrest for allegedly creating a ‘toolkit’ for the farmer protests that was tweeted by Greta Thunberg. — AFP photo

An Indian climate change activist was granted bail on Tuesday 10 days after being arrested for allegedly creating a ‘toolkit’ to help the country’s farmer protests that was tweeted by Greta Thunberg.

The arrest of 22-year-old Disha Ravi on charges of sedition—which can carry a sentence of life imprisonment — sparked fierce criticism from activists and India’s opposition politicians.

Police alleged that Ravi was a ‘key conspirator’ in the formation of the toolkit, which was shared by Swedish climate activist Thunberg on social media.

The toolkit offers basic advice on joining the protest on the ground and spells out how to show support on social media.

Officers said the aim appeared to be to ‘create disharmony among various social, religious and cultural groups and encourage disaffection and ill-will’ against the Indian government.

Police also said Ravi and two others had been in contact with a Canada-based organisation that allegedly supported separatists from India’s Sikh minority.

According to the Indian Express newspaper, a Delhi court on Tuesday found no ‘palpable reason’ to deny bail to Ravi, ‘considering the scanty and sketchy investigation’.

The protest by thousands of farmers, many of them Sikhs, on the outskirts of New Delhi since late November against new agricultural laws has emerged as a major challenge to prime minister Narendra Modi.

The demonstrations have been mostly peaceful but turned violent on one day in late January when a tractor rally by farmers in Delhi became a rampage, leaving one person dead.

The protest then took an international turn in early February when pop star Rihanna, Thunberg and the US vice president’s niece Meena Harris tweeted about the subject.

Thunberg has sparked further ire by tweeting in support of Ravi.