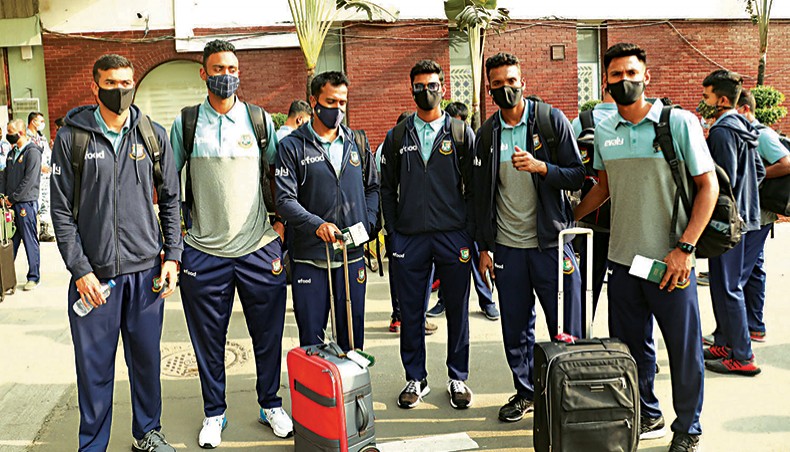 A group of Bangladesh cricket team players are seen prior to their departure for New Zealand at the Hazrat Shahjalal International Airport on Tuesday. — BCB photo

Bangladesh one-day international captain Tamim Iqbal set his sights on ending their winless record against the Kiwis in New Zealand before the Tigers left home to play three ODIs and three Twenty20s against the Blackcaps.

The Bangladesh squad and support staff left for New Zealand in a Singapore Airlines flight at the Hazrat Shahjalal International Airport in the capital on Tuesday afternoon for the national team’s first overseas tour since the pandemic.

So far, Bangladesh have played 26 matches across all formats against New Zealand at their home and have lost on all occasions.

Tamim, who led the team to a 3-0 clean sweep against West Indies in his first assignment as the regular skipper, wants to captain Bangladesh to its first victory in New Zealand against the hosts.

‘We all know that the condition in New Zealand is very difficult for us. But nothing is impossible. We will try to achieve something that we haven’t managed to do so far. We are optimistic about doing well in the series,’ the ODI captain told the reporters at the airport.

‘Obviously we are looking forward to break the cycle, we hope to come back with a win,’ the left-hander told the media on Tuesday.

This will also be Bangladesh’s first series after the 0-2 drubbing in the two-Test series against West Indies at home.

But Soumya believes the Test debacle won’t affect the white-ball side and is taking confidence from their performance against the Caribbean side in the ODI series.

‘The ODI series against the West Indies went well for us. We have an ODI series there [New Zealand] too, hopefully we will do better,’ the all-rounder said before the flight.

The cricketers will have to go through strict quarantine procedure before the start of the series as they will have to stay in quarantine for 15 days, the first seven of which they aren’t even allowed to leave their hotel rooms.

But all-rounder Mohammad Saifuddin thinks that the lengthy stay will benefit the team as it will help them adapt with the condition New Zealand.

‘We will get two weeks for practice. With the help of the coaching staff, we will try to adapt with the conditions,’ he said.

Shakib Al Hasan is not joining Bangladesh team in this tour as he left for the USA on Monday to be by his wife’s side during the birth of his third child.

The first ODI will take place at Dunedin on March 20 followed by the next two on March 23 and 26 respectively at Christchurch and Wellington.

The ODI series will be followed by a three-match T20 series.