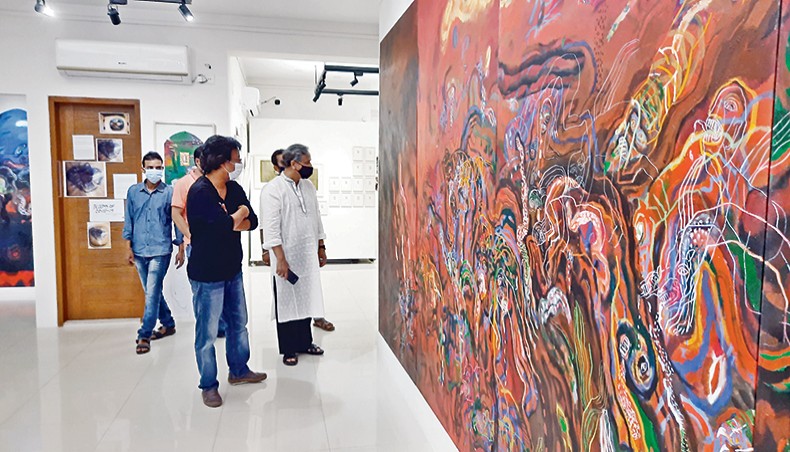 Visitors look at a displayed artwork by Professor Nisar Hossain at his on-going retrospective art exhibition at Gallery Chitrak in Dhanmondi. — press release

The month-long exhibition titled Shat Bachharer Khatian, organised by Gallery Chitrak, is featuring over 100 artworks done during the 25 year-long artistic journey of the artist.

The works give the viewers a glimpse into diverse subject matters, including portrayal of hell and doomsday, representation of assassins, the clash between truth and false, portraits of killers who collaborated with the Pakistan junta during the War of Independence, women who were oppressed during the war, mother and child, the Sunderbans and deforestation that threatens the region.

The exhibition is based on a narrative that seeks to connect the social-political atrocities that took place before and after the war of independence to the Pakistani collaborators. This includes the assassination of the country’s founding president Sheikh Mujibur Rahman on August 15, 1975.

The retrospective also highlights various social anomalies that haunt contemporary society and how the parasitical people are taking advantage of the ruling class’s weaknesses. The exhibition is weaved around the concept of hell and speaks about the limits of the religious framework that uses the idea of the doomsday as a way to salvage the human race.

Renowned cultural activist and former cultural affairs minister Asaduzzaman Noor inaugurated the exhibition on February 19 while former BGMEA president and Awami League lawmaker Shafiul Islam Mohiuddin, Shilpachariaya Zainul Abedin’s son Mainul Abedin and others were present as special guests at the inaugural ceremony of the exhibition, which was presided over by eminent cartoonist and painter Rafiqun Nabi.

To mention a few works, an acrylic painting titled ‘Diary of Hell-1’ shows a big canvas where fire, one of the vital elements of hell, is highlighted. The painting also shows a combination of black and red gestures with various forms of animals, tiger and snake lending a sinister dimension to it.

Another acrylic work titled ‘The Assassin’ has a red background and contains a figure of a monster representing the shocking act of assassination of the country’s founding president Sheikh Mujibur Rahman.

A mixed media work titled ‘Killer-71’ has a background comprising red, violet and a lighter shade of brown. On the right, top and bottom part of the work, dark ash colour lends it an ominous dimension. The figure of a monster becomes as usual the central motif while the violet part of the work is shown empty and the red portion shows some shattered figures of humans.

The work done with enamel paint on polycloth titled ‘The Dance of Carnivores-2’ shows four figures dancing on the floor. The edges of the work are covered by flowers and leaves reminding the viewers of rickshaw paintings.

A watercolour painting titled ‘A Few Sunderban’ shows a tree with sprouting green leaves and its roots depicting the scenic beauty of the Sunderbans.

One of the eye-catching displays in the exhibition has been created using palm leaves.

A palm leaf work titled ‘Delirious Time’ shows an engraved drawing of two animals placed parallel to one another where the middle of the figures are inscribed with various lines, forms and dots.