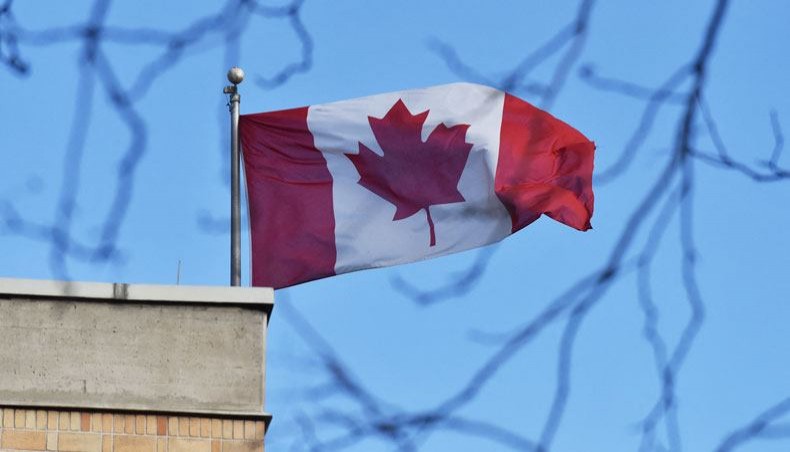 In this file photo the Canadian flag flies above the Canadian embassy in Beijing on January 15, 2019. -- AFP photo

Canadian MPs voted on Monday to label Beijing’s treatment of Uighurs in Xinjiang as genocide, a move angrily slammed by China as a ‘malicious provocation.’

Rights groups believe at least one million Uighurs and other mostly Muslim minorities have been incarcerated in camps in the northwestern region, where China is also accused of forcibly sterilising women and imposing forced labor.

The motion ‘Uighurs in China have been and are being subject to genocide’ passed unanimously in the Canadian House of Commons, and ministers called on prime minister Justin Trudeau to officially label it as such.

The motion also called for the 2022 Beijing Winter Olympics to be moved if the ‘genocide’ continues.

The United States has already used the label, with the administration of former president Donald Trump slamming China in January for a ‘systematic attempt to destroy Uighurs.’

Trudeau had said on Friday that there were significant reports of abuses coming out of Xinjiang. And following a G7 meeting, he said Canada was consulting with its international allies on the use of the term ‘genocide’ for the treatment of Uighurs.

Beijing hit back on Tuesday, calling the motion a ‘shameful act’ and ‘malicious provocation against the 1.4 billion people of China.’

‘Canada’s attempt to contain China’s development through passing the Xinjiang-related motion will not succeed,’ the Chinese embassy in Ottawa said in a statement.

The embassy accused ‘hypocritical and shameless’ Canadian lawmakers of ‘using the excuse of human rights to engage in political manipulation on Xinjiang.’

The growing calls for action in Canada echo complaints about China’s human rights record in other Western nations, including the United States where President Joe Biden is seeking to rebuild alliances to maintain pressure on Beijing.

The new president has already criticised Beijing on its human rights situation, especially the abuses in Xinjiang, including in a marathon two-hour call with Chinese leader Xi Jinping.

After initially denying the existence of the camps in Xinjiang, China later defended them as vocational training centers aimed at reducing the appeal of Islamic extremism.

Beijing had said on Monday that its treatment of ethnic minorities in Xinjiang and Tibet has ‘stood out as shining examples of China’s human rights progress.’

And foreign minister Wang Yi later told the UN human rights council via videolink that ‘there has never been so-called genocide, forced labor or religious oppression in Xinjiang.’

Relations between China and Canada have deteriorated in recent years.

Ties soured in late 2018 over the arrest of Huawei executive Meng Wanzhou on a US warrant, and China’s detention of two Canadians — former diplomat Michael Kovrig and businessman Michael Spavor — in what Ottawa has called retaliation.

The two men have had virtually no contact with the outside world since being detained on spying charges.