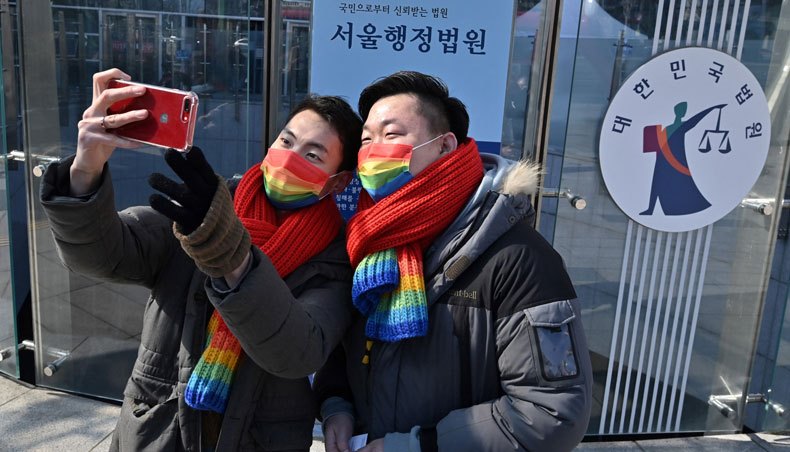 South Korean same-sex couple So Seong-wook and Kim Yong-min take a selfie after a press conference as they file a lawsuit against the National Health Insurance Service for their dependent family status, at the Seoul Administrative Court in Seoul on February 18, 2021. — AFP photo

Murat has watched for years as LGBT people who face persecution in the Middle East have found refuge in his cosmopolitan neighbourhood of Istanbul.

Today, in the face of growing government hostility and vitriol from Turkish president Recep Tayyip Erdogan towards lesbian, gay, bisexual and transgender people, the young gay man said that he had just one wish: to leave.

‘Before, there would be a wave of hatred and then it would calm down,’ said the 30-year-old computer engineer, his eyes piercing through a haze of cigarette smoke.

‘Now, it’s been going on for months, turning into a tsunami,’ he added.

In the process, the attacks had tarnished Turkey’s image as a haven of tolerance in the socially conservative Muslim world.

LGBT groups believed Erdogan was attacking their community to distract his supporters from Turkey’s economic travails.

Erdogan this month unleashed a torrent of attacks against what he called ‘the LGBT youth’, which came as sudden student protests began to rattle his 18-year rule.

The immediate cause of Erdogan’s fury was a student artwork depicting Islam’s holiest site in Mecca draped in the LGBT rainbow flag.

Interior minister Suleyman Soylu reported the arrest of ‘four LGBT freaks’ over the display, condemning the ‘degenerates’ in Twitter posts that got flagged for ‘hateful conduct’.

Erdogan later told his female supporters not to listen to ‘those lesbians’, adding there was ‘no such thing’ as the LGBT movement in Turkey.

‘It’s a hate campaign’ aimed at discrediting the student protests, said Can Candan, a documentary filmmaker and professor at Bogazici University.

The top Turkish institution had been spearheading the protests after Erdogan appointed a loyalist as its rector at the start of the year.

The controversial artwork prompted officials to shut down Bogazici’s LGBT club, where Candan was a faculty adviser.

‘This is an extremely dangerous game, because hate speech leads to hate crime,’ said Candan.

Alaz Ada Yener, who chooses to identify as non-binary and is active in the LambdaIstanbul LGBT rights association, said walking the streets no longer felt safe.

‘People no longer look at us as just different or original, but as traitors to the nation,’ Yener said, adding, ‘Those who commit a crime against LGBT people will tell themselves they have the authorities on their side.’

Homosexuality is not illegal in Turkey, but homophobia is widespread.

While there were no official figures, Turkey had slid down the LGBT rights index published by the International Lesbian, Gay, Bisexual, Trans and Intersex Association.

Last year, it was ranked 48th out of the 49 countries ILGA lists in its Eurasia region.

Kaos GL, one of the oldest LGBT rights groups in Turkey, last year counted more than 2,000 news articles it qualified as discriminatory – a 40-per cent jump on 2019.

Even before the Bogazici artwork scandal, the LGBT community felt like it was coming under siege.

Last year, Netflix cancelled the production of a Turkish series featuring a gay character after failing to win the government’s permission to film.

In June, the French sporting goods retailer Decathlon became the target of Turkish media boycott campaign, after saying it stood in solidarity with the LGBT community.

And in April, Erdogan rallied to the defence of a top religious affairs official who linked homosexuality to the spread of diseases, amid the coronavirus pandemic.

‘What he said was totally right,’ Erdogan said.

Some believed the attacks were a response to the strides the LGBT movement had made in Turkey, where rainbow flags were becoming a frequent presence at protests.

The government is ‘trying to stem the growing social acceptance of LGBT people by denigrating them,’ said Eylem Cagda, a sociologist who specialises in LGBT issues in Turkey.

After a spectacular Pride March in Istanbul drew 100,000 people in 2014, the government responded by banning future events in the city, citing security concerns.

The government ‘is trying to make us disappear from the public sphere,’ said LambdaIstanbul’s Yener, adding, ‘They are trying to eliminate our social existence.’

Murat, for his part, said he feared the government will now start adopting anti-LGBT legislation.

‘We’ve made so much progress,’ he said, crushing out his cigarette, adding, ‘We’re going back decades.’