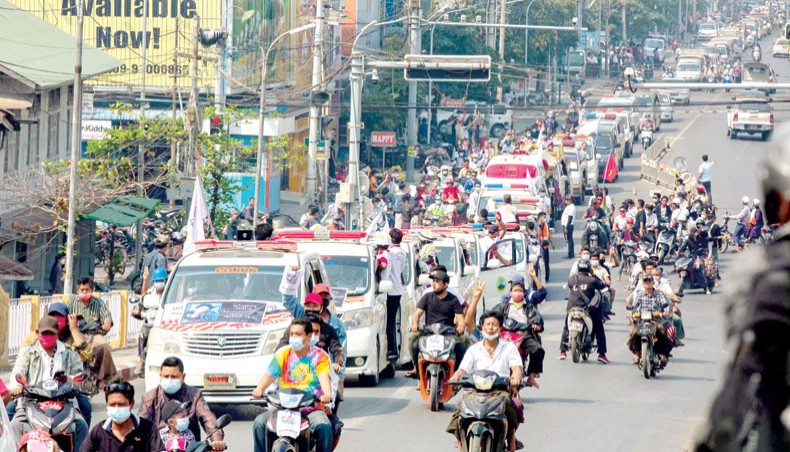 A convoy of cars makes its way during the funeral for protester Thet Naing Win, who died from a gunshot wound while taking part in a demonstration against the military coup last week, in Mandalay on Tuesday. — AFP photo

Myanmar’s military leaders came under renewed pressure Tuesday as the world’s wealthiest nations condemned the junta for responding to anti-coup demonstrators ‘with violence’, a rebuke coming on the heels of tightened sanctions from Washington and Brussels.

Authorities have gradually ratcheted up their use of force against a massive and largely peaceful civil disobedience campaign demanding the return of ousted leader Aung San Suu Kyi.

Three anti-coup protesters have been killed in demonstrations so far, while a man patrolling his Yangon neighbourhood against night arrests was also shot dead on the weekend.

‘Use of live ammunition against unarmed people is unacceptable,’ the foreign ministers of the G7 group of rich democracies — comprising Canada, France, Germany, Italy, Japan, Britain, the United States together with the EU — said in a statement Tuesday.

‘Anyone responding to peaceful protests with violence must be held to account,’ they said, calling for Myanmar security forces to ‘exercise utmost restraint and respect human rights and international law’.

The sharp condemnation comes after the overnight blacklisting of another two members of the regime by the United States — air force chief Maung Maung Kyaw and fellow junta member Moe Myint Tun — after Washington announced targeted sanctions against other top generals earlier this month.

‘Sanctions can always hit people on the ground which we should avoid, but targeted sanctions are needed because we need huge pressure against the coup,’ United Nations special envoy to Myanmar Christine Schraner Burgener told France 24, adding she suspected the regime was surprised by the scale of resistance.

‘The military has always won using weapons and I don’t like that at all,’ said protester Chan Mya. ‘We hate that and we’ll keep protesting and expressing what we feel in peaceful ways.’

In the northern Kachin city of Myitkyina — which has seen bursts of violence from authorities — protesters rode their motorbikes across town waving the Myanmar flag and flashing a three-finger salute, a symbol of resistance.

Mandalay saw a more sombre crowd at the funeral of Thet Naing Win, a 37-year-old man shot and killed Saturday when security forces opened fire into a crowd of anti-coup protesters.

‘I beg for all to help see that my husband’s case is ruled with justice,’ said his widow Thidar Hnin, adding that she wants to see ‘the dictator dethroned’.

‘This country is owned by the citizens,’ she said.

More than 680 people have been arrested since the February 1 coup, according to the Assistance Association for Political Prisoners monitoring group, with nearly all still behind bars.

In recent weeks, the Myanmar military has deployed tear gas, water cannon and rubber bullets against protesters, with isolated incidents of the use of live rounds.

They have also stepped up the presence of security forces in Yangon, Myanmar’s largest city.

Tens of thousands rallied on Monday in the capital Naypyidaw, a military stronghold. More than 100 people were arrested as police chased protesters through the streets.

According to the Naypyidaw Justice Centre, a legal aid centre, they helped secure the release of about 20 protesters by Tuesday. It remains unclear how many are still behind bars.

The civil servants’ boycott has choked many government operations, as well as businesses and banks, and at the weekend the junta gave its most ominous warning yet that its patience was wearing thin.

‘Protesters are now inciting the people, especially emotional teenagers and youths, to a confrontation path where they will suffer the loss of life,’ said a message aired on state media.

Suu Kyi has not been seen since she was detained in a dawn raid and has been hit with two charges by the junta, one of them for possessing unregistered walkie-talkies.

Her hearing is expected on March 1.