Solskjaer not giving up hope of catching City 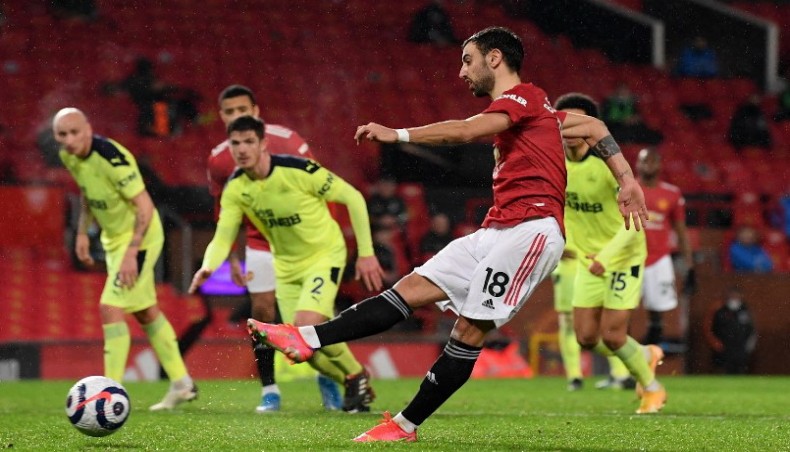 Ole Gunnar Solskjaer is not giving up hope that Manchester United can challenge Manchester City for the Premier League title, despite the scintillating form of the league leaders.

City have soared 10 points clear of their local rivals thanks to an 18-game winning streak in all competitions.

United's own inconsistent form has helped open up the gap, but the Red Devils beat Newcastle 3-1 on Sunday to win for just the second time in six league games.

‘We've got to be there just in case,’ said Solskjaer. ‘Every time we get three points we've done our job and that's what we've got to do and see what other teams do.’

Bruno Fernandes and Marcus Rashford were again on target on a night United needed their star men to paper over the cracks of another unconvincing performance.

Solskjaer made five changes to the side that impressively thrashed Real Sociedad 4-0 in the Europa League on Thursday and was lucky not to be punished for a disjointed start from the hosts.

‘We had to find a way to win it in the second-half. The first-half wasn't up to the standard that we wanted,’ added Solskjaer.

‘Maybe because of Newcastle, maybe because of what we did in the week. We asked them to go again after a high-intensity game and it took us to half time to get our legs and energy.’

A run of two wins in 14 games has left Newcastle just three points clear of the drop zone, but Steve Bruce remains confident his side will survive.

‘Fulham have had a good week and won a couple of games, which at the bottom end of the table is big, but there are a few of us: Brighton, Burnley and maybe Crystal Palace looking over their shoulders,’ said Bruce.

‘My message to the supporters is that I'm convinced we'll be ok.’

Poor goalkeeping cost Bruce's men the opening goal on the half hour mark as Rashford wriggled free inside the area, but his shot should have been kept out by Karl Darlow.

United's sloppy defending from set-pieces was punished six minutes later, though, when Saint-Maximin swept the ball into the top corner after Harry Maguire only half-cleared a cross into the box.

After a blistering start to his United career last season, Dan James has struggled for game time, but the Welshman has now scored in his last three appearances as he blasted past Darlow from close range just before the hour mark.

More good footwork from Rashford then drew Joe Willock into an ill-advised challenge inside the box and the on-loan Arsenal midfielder conceded a penalty.

Darlow had saved the only spot-kick Fernandes has missed as a United player when the sides met earlier in the season.

But he was wrong-footed this time as the Portuguese playmaker coolly converted to give United the two-goal cushion they craved.