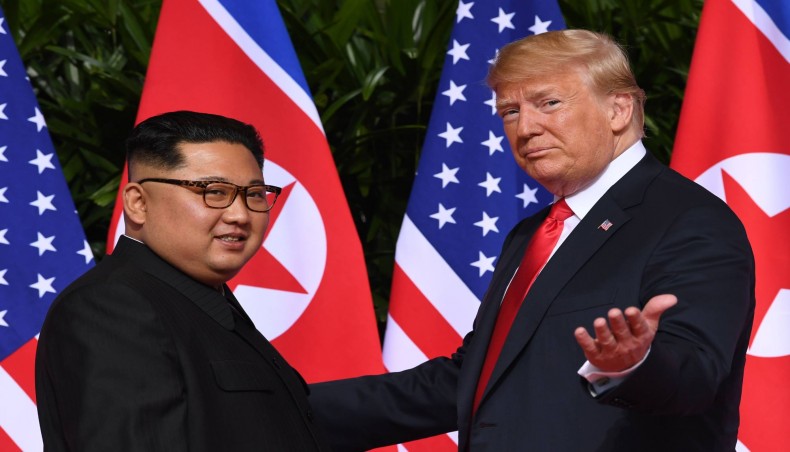 Donald Trump offered North Korean leader Kim Jong Un a ride home on Air Force One after a summit in Hanoi two years ago, according to a new BBC documentary.

Kim and Trump first engaged in a war of words and mutual threats, before an extraordinary diplomatic bromance that featured headline-grabbing summits and a declaration of love by the former US president.

But no substantive progress was made, with the process deadlocked after the pair’s meeting in Hanoi broke up over sanctions relief and what Pyongyang would be willing to give up in return.

According to a BBC documentary, ‘Trump Takes on the World’, the US president ‘stunned even the most seasoned diplomats’ by offering Kim a lift home on Air Force One after the 2019 summit in Vietnam.

If Kim had accepted the offer, it would have put the North Korean leader — and probably some of his entourage — inside the US president’s official aircraft and seen it enter North Korean airspace, raising multiple security issues.

In the event, Kim turned it down.

‘President Trump offered Kim a lift home on Air Force One,’ Matthew Pottinger, the top Asia expert on Trump’s National Security Council, told the BBC, it reported at the weekend.

‘The president knew that Kim had arrived on a multi-day train ride through China into Hanoi and the president said: ‘I can get you home in two hours if you want.’ Kim declined,’ the expert added.

For his first summit with Trump in Singapore in 2018, Kim hitched a ride on an Air China plane, with Beijing keen to keep North Korea — whose existence as a buffer state keeps US troops in the South well away from China’s borders — firmly within its sphere of influence.

During the Singapore summit, Trump gave Kim a glimpse inside his presidential state car — a $1.5 million Cadillac also known as ‘The Beast’ — in a show of their newly friendly rapport.

But last month Kim said that the US was his nuclear-armed nation’s ‘biggest enemy’, adding that Washington’s ‘policy against North Korea will never change’ no matter ‘who is in power’.

North Korean official media have yet to refer to Joe Biden — who beat Trump in last year’s election — by name as US president.