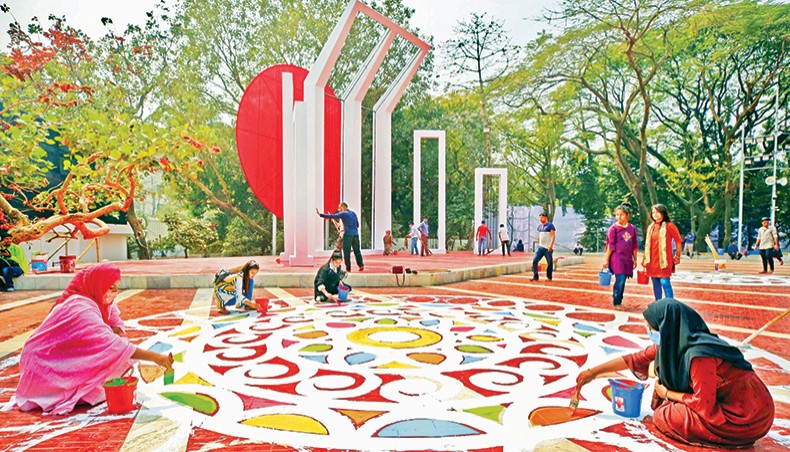 FEBRUARY 21 visits us every year but it is not just a date. It indexes many things, which can be read in the pages of the New Age Special and in other newspapers and electronic media. The discourses produced and reproduced across the media cover the history, politics and tragedy associated with the birth of a nation, nation-state and national identity. All that is symbolised by February 21 followed from a language policy decision in the early days of Pakistan. The Pakistan government wanted to install Urdu, spoken by a linguistic minority — around 3 per cent of the population, as the only language at the federal level. The policy was unacceptable to Bangla-speaking East Pakistanis, who wanted to have Bangla alongside Urdu in this role. Taking this landmark case as an instance of language policy, this article introduces the field of language policy and planning. My aim is to provide an understanding of what language policy is, how it works, and how it relates to language, society and social change.

Over decades, the main ideology that has informed language choice at the national level is the ideology of nationalism. It is the one-nation, one-language ideology. This oft-quoted ideology does not have a long history, as its origin is associated with the birth of nation-states in Europe from the eighteenth century onwards. It is not simply the case that nation-states needed language as a tool for bringing people together under the new collective identity. The political and ideological imperative actually created the linguistic phenomenon that has come to be known as ‘national language’. The national language is not natural or God-given. It is a construction, which did not exist as such before the birth of European nationalism. Needless to say, its construction was facilitated by essential violence, denial and, more often than not, human loss.

The nationalist ideology of language that guided the Pakistan government in their pursuit of the Urdu-only policy was the ideology for many nations outside Europe. In 1919, president Theodore Roosevelt was quoted as saying about America where ‘We have room for but one flag, the American flag… We have room for but one language here, and that is the English language … and we have room for but one sole loyalty and that is a loyalty to the American people’. Roosevelt was of course referring to American English, which had been made different from British English so it could be used as a key ingredient of American national identity. Reconstituting English was a necessity for communication in American soil, but the new identity of English was a political claim.

Close to home, India walked the same nationalist path in relation to language policy. After the 1947 partition, Hindi was adopted as the only official language, which was expected to unite multilingual Indians. However, the leaders had to step back from that path in the face of strong oppositions from the southern states dominated by other languages. India was able to take control of things before it was too late; Pakistan also learned lessons about theory and practice of language policy; but it was too late.

Perhaps the closest parallel to Pakistan’s search for a national language is Indonesia, which is often cited as a case of successful language policy and planning. When Bahasa Indonesia was proposed as the national language at the Second Congress of Indonesian Youth in 1928, it was spoken by a small fraction — about 5 per cent — of the population, which spoke hundreds of other languages in the island nation. Bahasa Indonesia was not an entirely new language; it was created out of Malay and was given a new identity. Nominating Bahasa as the national language must have been a political risk because it was, like Urdu, a language without a large linguistic constituency. However, a greater risk would have been elevating Javanese, the majority language, to the role of the national language. The ethnically neutral language Bahasa has worked for Indonesia. It has proved to be an effective tool for bringing Indonesians together in a multilingual and multiethnic society. However, the comparable linguistic choice of Urdu failed in Pakistan.

The nationalist ideology of language may also be adopted beyond the nation-state territory for instrumental as well as ideological purposes. The best example is the Association of the Southeast Asian Nations, known as ASEAN, which selected English as the only working language for the ten member-states organisation. English is exogenous to the region, as it is not the native tongue in any of the nations. The official status of English in ASEAN has attracted much controversy because the choice of English has denied the linguistic ecology of the region. It may also have endorsed the hegemony of English, which was a colonial language. However, the choice is often justified on strategic grounds. English is perceived as a neutral language. It is also a global lingua franca, which, paradoxically, is expected to unite the ten nations in the AESEAN community.

Although the nationalist ideology of language has maintained its hegemony, there have been some fractures in recent years. Such developments are mainly due to globalisation that has brought nations together in a global village making it almost impossible for them to survive in isolation. More appropriately, it is the neoliberal ideology underpinning globalisation that demands nation-states to loosen their grip on national economy, politics, education as well as language in a changing global order. English has emerged as the language of globalisation and neoliberalism. It is an essential part of the linguistic pathway for nations to survive in a competitive global economic environment and build knowledge economies and societies. Therefore, national policymakers are forced to reconsider nationalist views of language and accommodate English in education and society. For example, immediately after independence in 1971, Bangla was pushed forward to replace English in all important domains including higher education in Bangladesh. The compulsory Bengali Introduction Law of 1987 also aimed to dethrone English. However, not long afterwards, the Private University Act of 1992 cleared the way for setting up private universities, which have operated mainly through English.

The essential connection between language and land assumed by the nationalist ideology has also been weakened by new technology, which allows people to cross borders between languages in virtual spaces. For instance, although the endless English- and Bangla-medium debates in Bangladesh are often informed by nationalist ideologies, in reality neither English- nor Bangla-educated students and graduates respect the borders between English and Bangla in their debates on social media. The mixing of Bangla and English has also become common in everyday life. This linguistic border-crossing has been given the name of ‘translanguaging’, among other terms, by language policy scholars. Policymakers may not want to ratify such border-crossing in language use, but they may have to give in to the changing linguistic tides, sooner or later.

Language policy is not just about language change or management; it is ultimately about managing people and changing society. Social change is executed by changes in language behaviours and identities. The main reason behind the opposition of Urdu during Pakistan days was the perceived fear that our language was going to be denied or undermined. It was assumed that this might result in the loss of our identity as Bangla-speaking people, who might be forced to live in a society ruled by an alien language.

The Saudi government has recently introduced Chinese in its education system. Apparently, this is a case of an unlikely language in an unlikely place. Who would have thought Saudis would be learning Chinese? If the new language penetrates Saudi education and society, it will be part of the local linguistic ecology. Chinese may also be part of Saudis’ communicative resources and of the social fabric in the coming decades. If that happens, Saudi will be a different society from what it is now.

Not all language choices or language-change initiatives by national leaders are desired by common people. Fortunately, such policymakers are not the only language managers in town. Individuals are also important players whose agency often determines the fate of languages in society. As we commemorate International Mother Language Day, I hope we will develop linguistic awareness, empathy and respect, and a sense of our agency.

Dr Obaidul Hamid, a senior lecturer in the School of Education, the University of Queensland, Australia, researches language, education and society in the developing world.