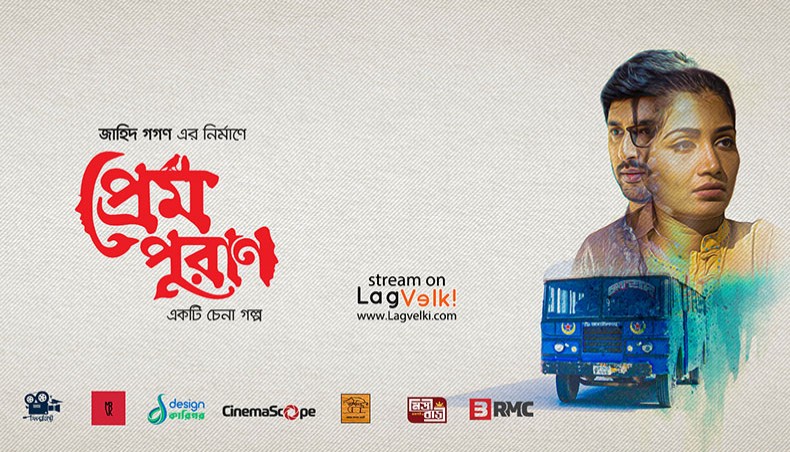 Prem Puran (Myth of Love) is a 35-minute Bangladeshi film directed and written by young filmmaker Zahid Gogon, released on February 12, 2021 on the OTT platform Lagvelki. Nasir Uz Zaman shares his thought about the film and works of the filmmaker after watching the film that is politically charged and based on some true events

THE film makers need to know what they want to do. This self-understanding clarifies their objectives and helps them to explore possible paths towards their goal. To contextualise the two sentences with a young filmmaker Zahid Gogon, let me put some of his words from the interview taken for the New Age Youth in 2018 when he already started working on the film Prem Puran. Gogon said, ‘I will make 17 films if I live 57 years.’ Gogon said that because he knew and believed that the stories he wanted to tell could be managed within these 17 titles. Gogon’s point of view describes that we might not get a large number of films but we will get quality works from him.

Before talking about the film Prem Puran, produced under the banner of Film Mistri production, I have to say a few words about the filmmaker as it is important to understand different aspects of his works as well as to understand this film. Zahid Gogon was a student of an aeronautical engineering college but quitted after getting his second-year diploma. In those days he started to explore his artistic self and made short films to satire the existing social practices within an academic and administrative space. Later on, the filmmaker completed his graduation in film and media studies.

From his young age, he wanted to become a politician though he knew his lack is in the required rhetorical skills. Moreover, he had an intense urge to tell stories. Gogon chooses the life of a filmmaker to reflect his political philosophy and thinking in his films.

Gogon’s previous works A Book behind the Shoes, Ekti Mrityu = Tin Bigha Jami and the latest one Prem Puran are among the remarkable examples of his talent that reflects his political ideology. Gogon did his best to follow every aspect of filmmaking grammar to express his thinking. The audiences, who are familiar with Gogon’s previous works, had some expectations from the Prem Puran and the film undoubtedly meets the expectancy. In his films, he transmits his technical talent and political ideology vividly, which is creating a unique identity of the works in terms of form and content.

The film Prem Puran is a revolutionary work in the film industry of Bangladesh. One might ask, why it is revolutionary? The sharp answer is the subjects or the issues the film deals with is quite absent in todays’ Bangladeshi film industry. Nowadays, when filmmakers are eager to make popular and superficial entertaining contents, Gogon’s Prem Puran has appeared as a politically charged and life-oriented romantic film. To mark here, the idea of romanticism is itself connected with the idea of a revolution that we should not forget. But, in the ‘I-hate-politics-generation’ and also in the film industry, the connection is almost forgotten or avoided. In this scenario, Prem Puran cannot but be a revolutionary work from the perspective of aesthetics and politics and also from historical values.

After the release of Prem Puran on the OTT platform Lagvelki on February 12, I got an opportunity to watch it several times, sometimes with my fellows. I noticed one of my fellows was browsing about Tajul Islam. I asked, whether the fellow knew about Tajul or not. The reply was ‘no’, but the film made the fellow interested to know about him, and I believe, this is one of the successes of the film to spark people’s mind to learn more about one of the main subjects of the film — Tajul Islam.

Comrade Tajul Islam was a former leader of the Bangladesh Students’ Union who joined the Adamjee Jute Mill as a worker after completing his graduation from the economics department of Dhaka University. On March 1, 1984, Tajul was killed when police opened fire on a procession brought out by workers to realise their five-point demand.

As an audience of Prem Puran, I realised that the film addresses the gender question too. In the film, one of the main characters Shanu, Tajul’s spouse, plays parallelly important role. Her sacrifices and struggles to support Tajul and their family reminded me of the struggles of Mariam, wife of Jasim Uddin Mandal. In popular and commercial films, women are projected as a commodity or product but in Prem Puran, the female character is a rebel one who left her financially sound urban life for her love and accepts the struggles with Tajul.

I have already addressed a point, why Prem Puran is a revolutionary work in today’s film industry in Bangladesh. After the release of Prem Puran, audiences are expressing that the film is different. But the film is projecting a familiar storyline and our everyday issues that we are encountering with. I did not find any dialogue in the dialogue-based film that we never heard. The issues those the film projects are very much known to everyone. But the difference is that we do not see other films represent the issues and it is one of the main characteristics of Prem Puran which gave it a unique identity.

While watching the film, like most of the audiences of a film, I wanted to identify the principal character in Prem Puran, but could not reach a concluding mark. Shimul, Shanu, Tajul, Caretaker, Madman and Shanu’s daughter are the characters of the film. Earlier, I talked about Shanu and should I consider her as the principal character or it is politically driven Tajul who left his opportunity to live economically secured life but chooses the life to work for the society and people; or it is the Madman who is questioning the urban idiosyncrasy; or it is the Caretaker who questions the education system — commercialisation of education, or it is Shimul who is silently watching all and also keeps the secretes of Shanu and Tajul.

The film presents some strong dialogues narrating and questioning some crucial issues and existing system. To mark some, the Madman’s words, ‘Are you from Dhaka? What’s the current news from there? Have people learned to love?’ The Caretaker’s words, ‘Half the income is spent on children’s private tuitions. … If you have to take private tuitions, what is the point of going to schools?’ The words of the Rickshaw Puller, ‘All such show off in the name of development, what’s the purpose of all this? Are people being happy? … If everyone has to demand this much, what’s the purpose of the government?’ At this point, I cannot keep myself away from sharing the phrase used in the film, ‘unshakable prestige’ which gives the film a special meaning. The film is inspired by The Gift of The Magi by O. Henry, Raincoat by Rituparno Ghosh, Bhangachora by Zahir Raihan. Prem Puran also contains the jute mill and the jute mill workers as one of the main subjects.

The 35-minute film Prem Puran features Manoj Kumar Pramanik, Samia Othoi, Ashok Bepari, Pankaj Majumder, Arman Parvez Murad, and Waniya. A soundtrack of a film is one of the most essential aspects of the film. The right music functions to set the mood, sparking the viewer’s emotion, even telling a story all by itself. The only song used in the film is Nishedher Berajaal, performed by Farhan Habib.