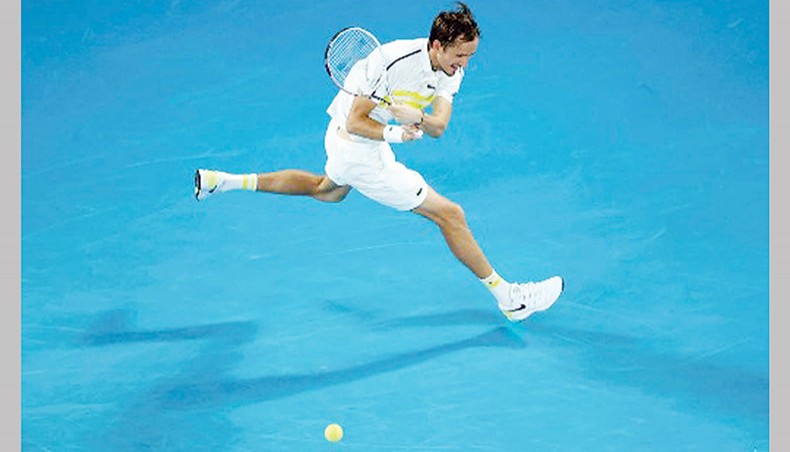 Russia’s Daniil Medvedev hits a return against Greece’s Stefanos Tsitsipas during their men’s singles semi-final match of the Australian Open in Melbourne on Friday. — AFP Photo

The 25-year-old, ultra-confident on the back of his unbeaten run, which includes three titles, has been knocking on the door of Grand Slam success for some time, but has yet to win a title.

To finally get over the line he must on Sunday beat top seed Djokovic, who has won all eight finals he has played at Melbourne Park.

But nobody on tour has more momentum than Medvedev, whose tricky game has stymied all opponents since November, and he has won three of his last four against the 17-time Grand Slam-winning Serb.

‘It definitely wasn’t easy,’ said Medvedev, only the third Russian after Yevgeny Kafelnikov and Marat Safin to reach the Australian Open final.

Twelve of his 20 straight wins have been against top-10 players and Medvedev said he took a lot of confidence out of that heading into Sunday’s decider.

Medvedev came into the showdown boasting a 5-1 edge in their head-to-heads and with a frosty relationship stemming from Shanghai in 2019, when the popular Greek blasted his playing style as ‘boring’.

Fifth seed Tsitsipas was backing up from a stunning five-set upset of 20-time Grand Slam champion Rafael Nadal, but it was an energy-sapping four-hour epic and he appeared to feel the effects.