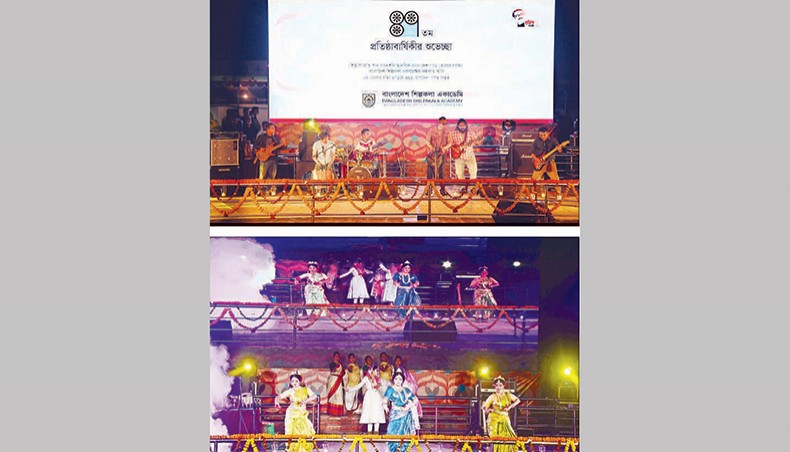 The event featured discussion, cultural shows, exhibition and others.

Bangladesh Shilpkala Academy officials lifted the curtain on the 47th anniversary celebration programmes hoisting the national flag and the academy’s flag at 10:00am. A week-long exhibition featuring activities of different departments of the academy was inaugurated at 4:00 pm at Gallery-2 and Gallery-3 of the National Art Gallery.

The academy organised a discussion and vibrant cultural show at its Nandan Mancha in the evening where Bangladesh Shilpakala Academy secretary Nowshad Hossain gave the welcome speech.

The programme commenced with rendition of the national anthem.

State minister for cultural affairs KM Khalid was present as chief guest at the programme, which was presided over by Bangladesh Shilpakala Academy director general Liaquat Ali Lucky.

‘I welcome all who have joined us today for celebrating the 47th founding anniversary of Bangladesh Shilpakala Academy. Bangabandhu Sheikh Mujibur Rahman established Bangladesh Shilpakala Academy on February 19, 1974 issuing a gazette notification. He aimed at furthering the country’s art and culture scenes alongside strengthening the economy. The academy has successfully completed its 47-year-long -journey with carrying out his dreams,’ said Nowshad Hossain.

‘Back then, the academy’s activities were limited to the district headquarters but nowadays the academy has been running its activities in 493 upazilas across the country. Bangladesh Shilpakala Academy’s director general, directors and other officials have been executing their duties with competence. The academy has formed a guideline for jatra artistes, introduced Puppet Dance Award and Shilpakala Padak. They have been gradually expanding their activities. I wish the academy all the best,’ said KM Khalid.

‘Artistes have always played a vital role in all movements including the language movement and War of Independence. I urge all to pay respect to the artistes. We have already introduced Shilpakala Padak and District Shilpakala Sammanana. We have been working hard to implement the dreams of Bangabandhu Sheikh Mujibur Rahman. We are currently constructing a 700 seat auditorium at the academy’s Music and Dance Centre under the patronisation of the cultural affairs ministry,’ said Liaquat Ali Lucky.

Artistes of Nrityanchal presented a dance recital synchronised with the song Nao chhariya de. It was directed by acclaimed dancer-choreographer Shamim Ara Nipa.