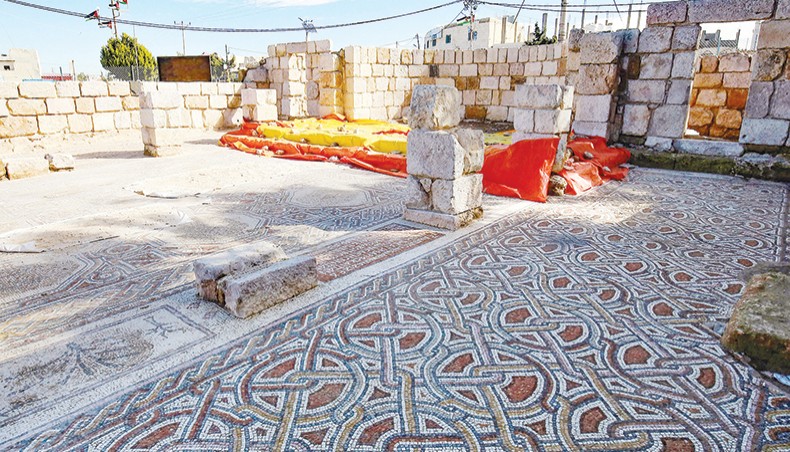 This picture shows the mosaic flooring of the Saint Mary church, built in 543 AD, the restoration of which was recently completed by workers employed by a pilot project run by the UN cultural agency UNESCO, in the small town of Rihab, some 70 kilometres north of the Jordanian capital Amman, on February 9, 2021. — AFP photo

In the ruins of an ancient Byzantine church in northern Jordan, local townspeople and Syrian refugees work side-by-side on a project that preserves cultural heritage and fights poverty.

Meticulously operating by hand with tweezers and brushes, workers restore a mosaic floor piece by piece at the St John the Baptist church, built in 619 AD.

It is one of three church mosaic floors under restoration, or recently restored, in the small town of Rihab, adding to an impressive array of such national treasures.

Jordan’s most renowned mosaic is one of the oldest maps of the Holy Land, consisting of over two million mosaic stones originally built into the floor of a sixth century Byzantine church in Madaba.

‘I don’t think there is another country with (as) many floor mosaics for the Byzantine time,’ said 54-year-old expert Franco Sciorilli, an Italian who is supervising the work.

Rihab, 70 kilometres (around 45 miles) north of the capital Amman and less than half that distance from the Syrian border, has over time been home to around 32 churches, mostly from the Byzantine era, according to Sciorilli.

But nowadays only the ruins of five or six are visible, including the St George cathedral, built in 230 AD and one of the oldest in the world, he said.

The rest remain buried in sand.

Three hundred people, a fifth of them women, are working on the pilot project to restore the sites, run by UN cultural agency UNESCO and financed by Germany.

All of the workers live in Rihab, and around a third are Syrians.

For 45-year-old Walid al-Awad, who lost his home and his livelihood when he fled the city of Daraa in war-torn Syria in 2012, the project is a lifeline.

‘I am proud to be part of the restoration and maintenance of historic monuments,’ the father of six said.

Kneeling on thick pieces of foam, workers hunch over a brown, white and black tile mosaic, whose design represents the Tigris and the Euphrates Rivers as well as trees, flowers and geometric figures.

There are no human faces or bodies, in conformity with a ruling by eighth-century Byzantine Emperor Leo III the Isaurian forbidding such depictions.

An ancient Greek inscription reads that the mosaic was financed by residents in honour of St John the Baptist.

‘The project has two main aims: preserving heritage... (and) creating job opportunities for local communities,’ even if the employment is short-term, said Dania Dirani, head of the UNESCO initiative.

She said the workers were trained in the site’s history and churches, along with how to work with mosaics and restoration.

Only half of the 600 applicants could be chosen, and those most in need were given priority, she added.

The workers earn between 12.5 and 15 Jordanian dinars (just under $18 and up to $21) a day, depending on their skills and qualifications.

Meals and transport costs are part of the package, in a country where the unemployment rate is 23 percent.

For Taha al-Khazaleh, who has a diploma in restoring mosaics, it was a perfect fit.

‘I was happy to be part of this project because it’s my speciality -- and because it gives me a monthly income of 300 dinars,’ said the 32-year-old Jordanian, who is from Rihab.

Abandoned in the ninth century, the town’s ruined churches were rediscovered from 1999.

At the church of Procopius and Sergius, built in 590 AD, stonemasons working on the UN project restore pilasters and plinths.

Restoration of the mosaic flooring at the St Mary church, built in 543 AD, was completed last month.

UNESCO official Giorgia Cesaro said the project represented ‘a change in the approach to heritage conservation’, one that took into consideration the communities living near the archaeological sites.

‘The idea is that they are the ones who can take care of their heritage, not necessarily international’ experts, she said.

She said the pilot programme had ‘paved the way to a much larger project which is targeting six sites in the north of Jordan and funded by the European Union’.

Meanwhile the Rihab work, which began in October last year, is expected to be completed by the end of May.

Italian Sciorilli, who said he had trained around 500 people in restoring mosaics since coming to Jordan in 1994, expressed enthusiasm about the site’s restoration.

‘The mosaics we have here are very simple, but the technique is very unique -- it is completely different than what you see’ elsewhere, he said.

‘We should let the rest of the world know about it.’