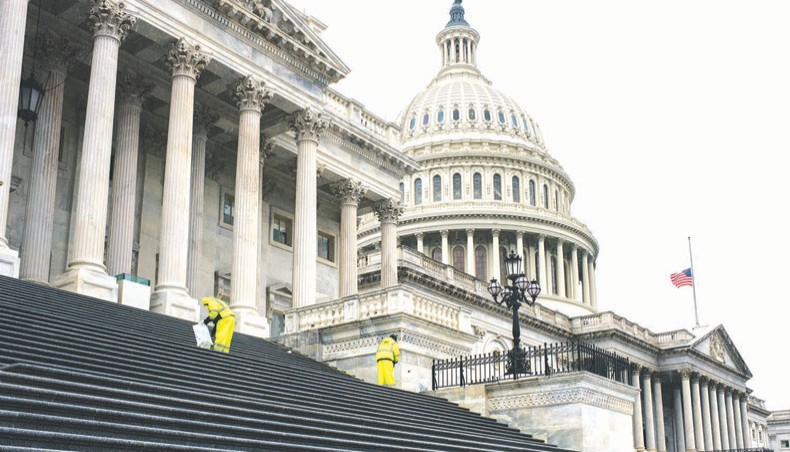 Employees salt the steps leading to the US Capitol following the conclusion of the second impeachment trial of former president Donald Trump on February 13 in Washington, DC. — Agence France-Presse/Getty Images/Brandon Bell

The US Senate acquitted president Donald J Trump for a second time in an impeachment trial, this time as a former president. And this time, the charge was as grave as it can get. The US House of representatives impeached him this time for inciting the insurrection on the Capitol on January 6 to force the Congress to give him a second term. Seven Republican senators joined 50 of their Democratic colleagues for the 57 to 43 outcome making it the most bipartisan ever.

The former president was, nevertheless, acquitted because notwithstanding the bipartisanship, the trial needed 67 senators or a two-thirds majority for conviction although the evidence was palpable, unmistakable, self-evident and as clear as daylight. Trump’s role in the crime for which he was impeached was never in doubt even before the Senate trial because Americans with the world watched the five-hour insurrection on the Capitol on January 6 in real time on television as a drama that was scripted and directed by the former president.

The final nail in the coffin for establishing the president’s iron-clad guilt ironically came from Republican Congresswoman Jaime Herrera Beutler who was among the 10 Republicans who had voted for the impeachment in the House. She dismantled the ‘blameless observer’ defence of the president’s lawyers by her statement on the penultimate day of the trial. She narrated an eyewitness account of House minority leader Kevin McCarthy’s phone call to Trump during which he pleaded and urged the president to call off the insurrectionists who were looking for Mike Pence who had gone into hiding for fear of his life. Kevin McCarthy had also told Trump that the insurrectionists had broken into his office.

Trump’s response, according to Congresswoman Buetler, was surreal. He said, ‘Well, Kevin, I guess these people are more upset about the election than you are.’ The response established the president’s sympathy for the insurrectionists and not for his vice-president or those trapped in the Capitol that made the minority leader furious and forced him to respond with expletives. Yet 43 Republican senators went blind, dumb and deaf and acquitted him for no other reason other than politics at its worst. They took shelter under the constitution that it did not allow a former president to be tried, an issue that Republican senator Paul Rand had raised at the beginning of the trial and was voted down 55 to 45 to establish that the trial was constitutional.

The impeachment managers also destroyed the constitutional argument. They established that the trial was constitutional and had precedence. Professor Brian Kalt of the Michigan State University whom Donald Trump’s lawyers cited 15 times in their defence arguments said during the trial that the former president’s lawyers had not just wrongly cited his seminal work on the constitution and impeachment but that he had said the opposite of what they quoted. These senators thus sold their souls to the devil to acquit him because they feared that otherwise, he would use the Republican Party’s base over whom he has a cult-like hold to ensure they were not elected again to the US Congress.

The outcome of the trial satisfied the Democrats, nevertheless. First, they were satisfied with the bipartisan issue. In the entire history of US presidential impeachment trials, just one senator crossed the party line. That happened in the first impeachment trial of president Trump. Second, the Democrats were excited that they succeeded amid the final drama of the trial to include Congresswoman Buetler’s statement in the trial proceedings that will forever underline the guilt of the Republican Party as enablers of president Trump in scripting the blackest chapter of US political history.

These Republican senators certified what the former president had said arrogantly leading to the 2016 presidential election that he ‘could stand in the middle of 5th Avenue (of New York) and shoot somebody’ in broad daylight and would not lose votes, or grope any woman anywhere in her body without any consequences. The Republican Party leaders led by these senators have validated a president who by his actions did not leave anyone in doubt that he wanted to rule the United States like Idi Amin, Robert Mugabe and their likes and perhaps worse.

The trial will, nevertheless, leave a serious damage to the US political system, to its hitherto successful two-party system, something it has not weathered in the past. The failure of the Republicans to stand up against the former president whose four-year term, in particular, the political absurdities that he committed after losing the November 3 election when he tried to remain in power, was the anti-thesis to everything enshrined in the US constitution. His actions and the role of the party as his enablers will have a debilitating impact on the US political system going forward.

President Abraham Lincoln had said in his speech in Illinois in 1858 as a candidate for a seat in the US Senate that ‘a house divided against cannot stand’ to underline that the country cannot remain united half for slavery and half against it. He lost that senate election but the truth of his statement prevailed in the end. The Republican Party is facing the same predicament 160 years after. This time president Trump has come before the party as the divisive factor in place of slavery.

The division has become evident and getting stronger. President Trump and senator Mitch McConnel, his most formidable ally up to the vote in the impeachment trial, have since fallen apart. He said very recently that the former president was ‘practically and morally responsible’ for the January 6 attack on the Capitol. The senator also urged the Democrats to pursue cases against president Trump in the criminal courts through the department of justice. The president called senator McConnel a ‘political hack’ under whom ‘the Republican Party can never again be respected or strong.’

Senator McConnel carries with him a significant section of the conservative base of the party in the Congress and nationally. A good section of the party deserted it during president Trump’s term and formed the ‘Lincoln Group’ and the ‘Never Trumpers’. There was also a silent group in the party, the believers of its conservative values, who have not yet shown their hands. Thus, while the impeachment in the House and the trial in the Senate may suggest, as some polls also do, that the former president now holds sway over the major part of the party, the situation may change in the time ahead leading to the 2022 mid-term elections as the former president gets embroiled, as he is almost certain to be, in cases in the courts.

Trump may, therefore, not be the dominating force in the Republican Party as the media and a number of polls have predicted. These are good tidings for president Biden and the Democrats. The incumbent president was the weakest in recent history going to the November 3 presidential election. He now has the real chance to emerge as the strongest US president in recent history, primarily because of the damage that president Trump and his enablers have done to the Republican Party and democracy in the country. Unless the Democrats mess up very badly, they have little fear going to the 2022 and 2024 elections because the Republicans would have to contend with a house divided against itself.

Trump gave systemic racism and white supremacy a strong national platform. These groups will now weaken significantly with Trump no longer in power and the party divided. President Biden has, meanwhile, shown great potential in uniting the country. Nevertheless, he would be leading the country at a very critical phase in its history but with hopes and expectations in the horizon.