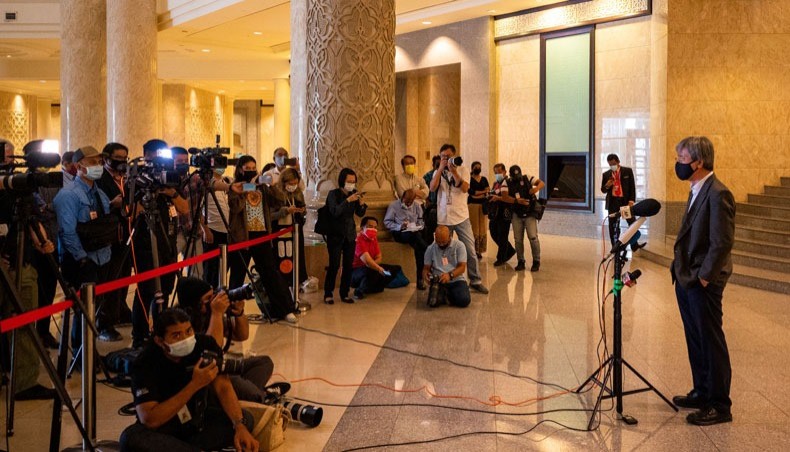 Malaysian news site Malaysiakini's editor-in-chief Steven Gan speaks to members of the media at the federal court after his verdict contempt of court proceeding in Putrajaya on February 19, 2021. -- AFP photo

A leading Malaysian news site was fined $120,000 on Friday over readers’ comments that criticised the judiciary, in a case that has sparked alarm about deteriorating press freedom.

Concerns have been growing that independent media are under attack in the Southeast Asian nation since a scandal-plagued coalition seized power without an election last year following the collapse of a reformist government.

Malaysiakini, a popular portal that has made a name for itself by reporting on the misdeeds of the ruling elite, and its editor-in-chief Steven Gan, were accused of contempt of court in a case brought by the attorney general last year.

It related to five readers’ comments posted under an article that were critical of the judiciary, which authorities say had eroded public confidence in the courts.

A panel of judges at the country’s top court ruled that Malaysiakini was guilty of contempt and ordered the site to pay a 500,000 ringgit fine by next week.

Gan, however, was cleared. He could have faced a jail term if convicted.

Judge Rohana Yusuf, delivering the verdict, told the federal court in the administrative capital Putrajaya that the case would ‘attract worldwide attention’, with some believing it had ‘threatened media independence’.

But she went on: ‘While freedom of opinion and expression is protected by the federal constitution, it must be within the bounds permissible by law.

‘And the law does not tolerate contempt of court as it undermines the system of judiciary.’

She said the comments on the site were ‘reprehensible’ and involved ‘allegations of corruption which were unproven and untrue’.

It was a split decision, with one of the seven judges dissenting.

During the case, prosecutors argued Malaysiakini had facilitated publication of the remarks but lawyers for the site said they had not intended to publish them, and they were removed quickly once police notified the portal.

Malaysiakini is one of the country’s leading current-affairs websites and has long reported on corruption scandals linked to officials, an area usually off limits for the traditionally pro-government mainstream media.