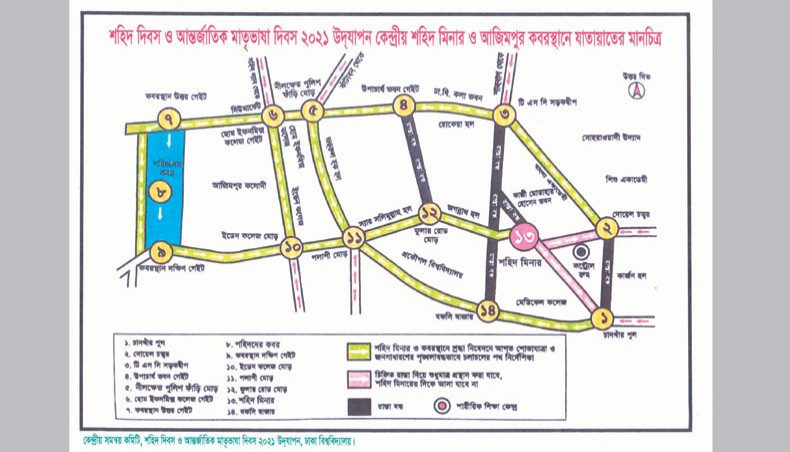 Dhaka University’s Ekushey Udjapan Samannay Committee› on Thursday drew up a route map for people who will visit Central Shaheed Minar and Azimpur Graveyard on February 21 to pay tribute to the martyrs of the language movement.

The route map will come into effect from 8:00pm on February 20, DU vice-chancellor Professor Md Akhtaruzzaman told a press conference this afternoon at the university›s Abdul Matin Virtual Classroom on the campus ahead of the Shaheed Dibash and International Mother Language Day.

According to the plan, people will enter Azimpur graveyard through the old High Court road, Doyel Crossing, Bangla Academy, TSC crossing, road beside the vice-chancellor›s residence, New Market crossing and the north gate of the graveyard.

After offering prayer at the graves of the martyrs, they will have to come out through the main South Gate of the graveyard and go through Azimpur Road, Palashi crossing, Fuller Road and the road in front of Salimullah Muslim and Jagannath halls.

People who would visit Shaheed Minar without going to the graveyard will use the road on the left of Nilkhet police outpost to the west of Sergeant Zahurul Huq Hall after getting past the vice-chancellor›s residence.

Shaheed Minar could also be reached through the road of Home Economics College and Eden College via Azimpur and Palashi crossings.

From Chankharpul area, people can go to Shaheed Minar through Bakshibazar crossing, Palashi crossing and the road in front of Sir Salimullah Muslim Hall and Jagannath Hall.

After placing wreaths at Shaheed Minar people would exit the place through the roads in front of the university playground, Doyel Chattar and Chankharpul.

Meanwhile, the authorities decided that a maximum of five representatives from each organization or institution and a maximum of two persons at the individual level will be allowed to lay wreaths at Shaheed Minar on 21st February to avoid public gathering on the campus in the coronavirus situation.

Earlier, DU VC Professor Md Akhtaruzzaman said, ‘This year, five people of each organisation and two individuals at a time will be allowed to lay wreaths at Central Shaheed Minar to avoid public gatherings. In this case, everyone must follow proper hygiene rules and wear a mask and maintain social distancing.’