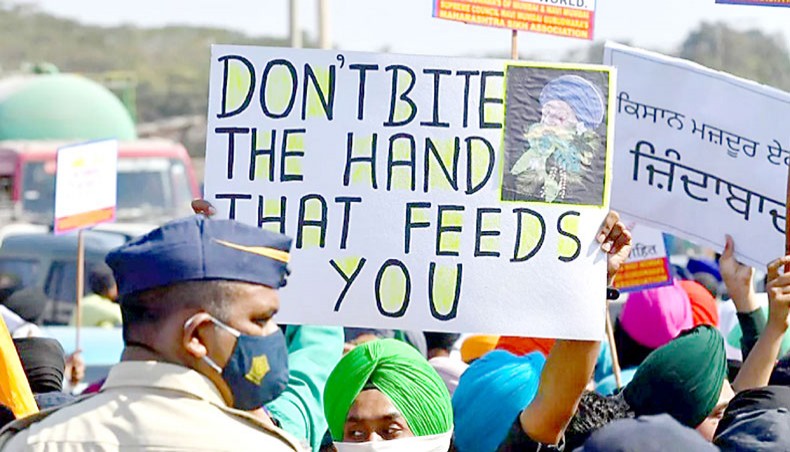 IN SEPTEMBER 2021 the UN will hold a Food Systems Summit. The aim will be to reshape world agriculture and food production in the context of the Malthusian UN Agenda 2030 ‘sustainable agriculture’ goals. The recent radical farm laws from the government of Narenda Modi in India are part of the same global agenda, and it’s all not good.

In Modi’s India, farmers have been in massive protest since three new farm laws were rushed through parliament last September. The Modi reforms were motivated by a well-organised effort of the World Economic Forum and its New Vision for Agriculture, part of Klaus Schwab’s Great Reset, the corporate side of the UN Agenda 2030.

IN SEPTEMBER, 2020 in a rushed parliamentary voice vote, rather than a duly-registered formal vote, and reportedly with no prior consultation with Indian farmer unions or organisations, the government of prime minister Narenda Modi passed three new laws radically deregulating India’s agriculture. That has sparked months of national farmer protest and nationwide strikes. The protests which are spreading across all India, demands repeal of the three laws.

In effect the laws end restrictions on large corporations’ buying land and stockpiling commodities to control farmer prices. They also allow large multinational businesses to bypass local or regional state markets where farmers’ produce is normally sold at guaranteed prices, and allows business to strike direct deals with farmers. This all will result in the ruin of an estimated tens millions of marginal or smallholder farmers and small middlemen in India’s fragile food chain.

The new Modi laws are measures the International Monetary Fund and World Bank have been demanding since the early 1990s to bring Indian agriculture and farming into the corporate agribusiness model pioneered in the USA by the Rockefeller Foundation decades ago. Until now no Indian government has been willing to attack the farmers, the country’s largest population group, many of whom are on tiny plots or bare subsistence. Modi’s argument is that by changing the present system, Indian farmers could ‘double’ income by 2022, an unproven, dubious claim. It allows corporations to buy farm land for the first time nationally so large companies, food processing firms, and exporters can invest in the farm sector. Against them a small farmer has no chance. Who’s behind the radical push? Here we find the World Economic Forum and the Gates Foundation’s radical globalised agriculture agenda.

THE laws are a direct result of several years’ effort of the World Economic Forum and its New Vision for Agriculture initiative. For more than 12 years the WEF and its new vision has pushed a corporate model in Africa, Latin America and Asia. The ‘big target’ has been India, where resistance to corporate takeover of agriculture has been fierce ever since the failed 1960’s Green Revolution of the Rockefeller Foundation. For the WEF Great Reset, better known as the UN Agenda 2030 for ‘sustainable agriculture,’ India’s traditional farm and food system must be broken. Its smallholder family farmers must be forced to sell to large agribusiness conglomerates and regional or state-level protections for those farmers eliminated. It will be ‘sustainable,’ not for the small farmers, but rather the giant agribusiness groups.

To advance that agenda the WEF created a powerful group of corporate and government interests called the NVA India Business Council. Its website at the homepage of the WEF states, ‘The NVA India Business Council serves as an informal, high-level leadership group to champion private sector collaboration and investment to drive sustainable agricultural growth in India.’ An idea what they mean by ‘sustainable’ is found in their membership.

In addition to top Modi backer Guatam Adani on the World Economic Forum’s NVA India Business Council, Mukesh Ambani, sits on the board of directors of Klaus Schwab’s World Economic Forum. Ambani, another top Modi backer, is chairman and managing director of India’s largest conglomerate, Reliance Industries, and Asia’s second wealthiest person worth some $74 billion. Ambani is a strong advocate of the radical farm reform as Reliance stands to reap huge gains.

In December, farmers in Punjab burned effigies of prime minister Modi, along with Reliance Industries chairman Mukesh Ambani, and Adani Group chairman Gautam Adani, accusing them of being behind the new laws of Modi.

For anyone with even a slight idea of these corporate behemoths, it is clear that the interests and welfare of India’s estimated 650 million farmers are not the priority. Notably, IMF’s chief economist Gita Gopinath, an Indian now in USA, has endorsed the laws, and has said that India’s recently-enacted agriculture laws have the ‘potential’ to increase farmers’ income.

On 26 November, a nationwide general strike began that involved approximately 250 million people in support of the farmers. Transport unions representing over 14 million truck drivers have come out in support of the farmer unions. This is the biggest challenge to the BJP Modi regime to date. The fact the government refuses to back down suggests it will be a bitter battle.

For the Agenda 2030, or Great Reset to transform the global food and agricultural industries as Klaus Schwab prefers to call it, to succeed, it is highest priority that India, with the world’s largest population, be brought into the globalist web of corporate agribusiness control. Clearly the timing of the Modi deregulation has in mind the UN 2021 Food Systems Summit.

INDICATION of the agenda in store for India’s farmers is the upcoming September UN Food Systems Summit. UN secretary general Antonio Guterres in 2019 announced the UN will host Food Systems Summit in 2021 with the aim of maximising the benefits of a ‘food systems approach’ consistent with UN 2030 Sustainable Development Goals. He named Agnes Kalibata of Rwanda as his special envoy for the 2021 Food Systems Summit. The summit’s founding statement pushes ‘precision farming’ such as GPS, Big Data and robotics, and GMO, as solutions.

Kalibata, former minister of agriculture in war-torn Rwanda, is also the president of AGRA, the Alliance for a Green Revolution in Africa. AGRA was created by the Gates and Rockefeller Foundations to introduce GMO patented seeds and related chemical pesticides into African agriculture. A key person Gates put in charge of the AGRA, Robert Horsch, spent 25 years as a senior Monsanto executive. The Bill & Melinda Gates Foundation is also a ‘contributing partner’ of the WEF.

After nearly 15 years and some $1 billion in funds from Gates, Rockefeller and other large donors, AGRA has failed to lift farmers into a better wellbeing. Farmers are forced by their governments to buy seeds from commercial suppliers, often tied to Monsanto and other GMO companies, as well as commercial fertiliser. The result is debt and often bankruptcy. The farmers are forbidden to reuse the commercial seeds and are forced to abandon traditional seeds which they could reuse. AGRA’s focus on ‘market-oriented’ means the global export market controlled by Cargill and other major grain cartel giants. In the 1990s, under pressure from Washington and agribusiness, the World Bank demanded African and other governments in developing countries end their agriculture subsidies. That, while the USA and EU agriculture remains heavily subsidised. The cheap subsidised EU and OECD imports drive local farmers bankrupt. That’s intended.

A 2020 report on AGRA, False Promises, concluded, ‘yield increases for key staple crops in the years before AGRA were just as low as during AGRA. Instead of halving hunger, the situation in the 13 focus countries has worsened since AGRA was launched. The number of people going hungry has increased by 30 per cent during the AGRA years… affecting 130 million people in the 13 AGRA focus countries.’ Gates’ AGRA has made African food production more globalised and dependent than ever on the will of global multinationals whose aim is cheap inputs. It forces farmers into debt and demands specific ‘cash crops’ like GMO corn or soya, be grown for export.

‘Smallholders with the potential to produce a surplus can create a market-oriented agricultural system… to exit poverty…The vision of success involves market-oriented farmers operating profitable farms…this will require some degree of land mobility and a lower percentage of total employment involved in direct agricultural production.’

In 2008 Rajiv Shah was the Gates Foundation’s director of Agricultural Development, and led the Foundation’s creation of the AGRA together with the Rockefeller Foundation. Today Shah is president of Rockefeller Foundation, Gates’ partner in AGRA, which foundation also financed the creation of GMO patented seeds back in the 1970s, the creation of CGIAR seed banks with the World Bank and India’s 1960’s failed Green Revolution. Rajiv Shah is also an agenda contributor at the World Economic Forum. Small world.

The fact that the president of AGRA is heading the September 2021 UN Food Systems Summit (note the use of ‘food systems’) exposes the seamless links between the UN, the Gates and Rockefeller Foundations, the World Economic Forum and their web of global corporate mega companies.

India, with 1.4 billion people, perhaps half in agriculture, is the last bastion where global agribusiness has been unable to dominate the production of food. The OECD has been globalised by industrial agribusiness since decades and the deterioration in food quality and nutrition confirms it. China has opened up and is a major player in the GMO world with Syngenta, as well as the world largest producer of glyphosate. China industrial pork factory farms such as Smithfield Farms, where the recent African swine fever is believed to have originated, are on the way to wipe out small-scale farmers there. The central role of the Gates-Rockefeller AGRA in the UN 2021 Food Systems Summit, the major role of the WEF in the world ‘food systems’ reset, and the pressures in recent months on the Modi government to implement the same corporate agenda in India as in Africa, are all no accident. It sets the world up for catastrophic harvest failures and worse.