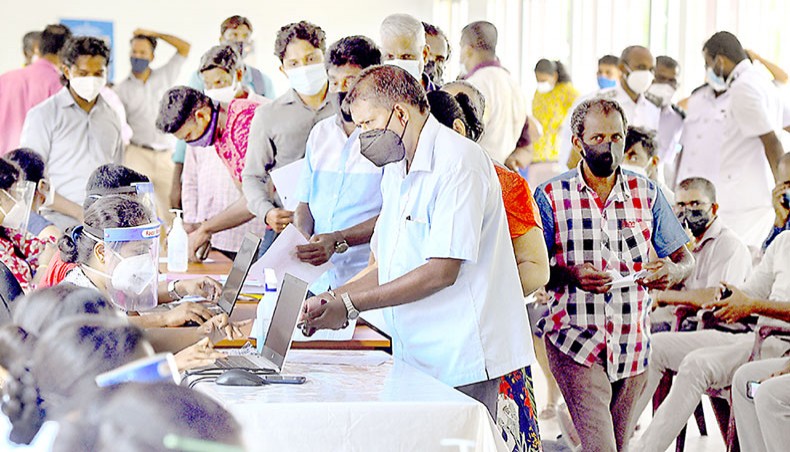 ONE of the issues that have created internal division in the country is the cremation of those who have succumbed to the COVID-19 virus. This policy of enforced cremations has been most opposed by the Muslim community for whom burial of the dead is a part of their faith. It has also brought international disapproval to the country. The UN Human Rights Commissioner’s January report on Sri Lanka states that ‘The COVID-19 pandemic has also impacted on religious freedom and exacerbated the prevailing marginalisation and discrimination suffered by the Muslim community. The High Commissioner is concerned that the Government’s decision to mandate cremations for all those affected by COVID-19 has prevented Muslims from practising their own burial religious rites, and has disproportionately affected religious minorities and exacerbated distress and tensions.’

The shift away from international practices with regard to the burial of COVID-19 victims was initially justified on the basis of science. During the early part of the pandemic when less was known about the disease, and more stringent methods were adopted to halt its spread, such as the two month long 24 hour curfew practised in Sri Lanka, there was a real fear that the coronavirus could be spread through dead bodies and water. However, when the practice of burying those who died of COVID-19 internationally began to be better known and scientists worldwide, and in Sri Lanka, began to downplay the significance of water transmission of the virus, Sri Lanka’s unwillingness to change its policy began to take on another dimension.

Among those who most strongly opposed the burial of COVID-19 victims have been nationalist ideologues and religious clerics with a limited knowledge of science. Many of them placed their faith in indigenous cultural practices of producing antidotes to the virus that had no basis in science. These included measures such as putting pots of water which had been chanted over into rivers and a concoction of honey and herbs as being efficacious in protecting against infection. There have been some amongst the scientific community itself who have identified with these positions on the grounds of belief in the efficacy of indigenous knowledge. The opposition to burial also took on an anti-Muslim sentiment that had escalated following the Easter bombings of April 2019.

OVER the past ten months the government has come under pressure from a variety of sources to change its policy with regard to enforced cremation on both political and humanitarian grounds, but to no avail. The main source of pressure has been the Muslim community within the country and their political representatives. They have been supported by sections of the Christian community to whom burial is the traditional way of farewell to the dead. The human rights organisations in the country and internationally also have made numerous appeals including a campaign of tying white ribbons on burial grounds. A further source of pressure has been the international community with governments of Muslim countries making their own representations to the government.

However, the ramping up of local and international pressure only led the government to harden its stance. It appears that a strategy of the government when it is under pressure is to rally its nationalist voter base. The election winning platform of the government was the need to uphold national sovereignty and not to yield to either international pressure or to the ethnic and religious minorities. The electoral rejection of the leaders of the previous government who were seen as appeasing both the international community and the minorities within the country has been a lesson that has made inroads into the thinking of the main opposition parties who have been cautious in the positions they take on controversial issues. However, when Sajith Premadasa, the main opposition leader, led a protest against enforced cremations which was also attended by civil society groups, the prospects of a bipartisan approach to resolving the problem became possible.

Prime minister Mahinda Rajapaksa’s declaration in parliament last week that burials would be permitted even in the case of COVID-19 victims was welcomed both locally and internationally and has not been politicised by the opposition parties. Ironically, the prime minister’s statement has been contested within the government and not been immediately operationalized. A ruling party parliamentarian had the audacity to say that the prime minister was referring to burials in general and not to COVID-19 burials in particular. The minister of health has announced that the matter still needs to be assessed by a committee of experts prior to a final decision being taken. The problem is that different committees of experts have been coming to different conclusions depending on the degree of nationalism they espouse.

PRESIDENT Gotabaya Rajapaksa is reported to have informed ambassadors of Western countries who met him that the political decision regarding COVID-19 burials had been taken and what remains is to implement the decision through the health ministry. The president is trying to find his way amongst contending powerful forces. The fact that the mainstream opposition parties are also supportive of following the WHO guidelines with regard to the option of burials would be reassuring to the government that this matter would not be politicised to its disadvantage. The problem that the government faces would be confined to an internal one which can more easily be resolved as it is in the self-interest of government members to come to a unified position on this issues.

The manner in which the COVID-19 burial issue is being addressed suggests the way forward with regard to the issue of the upcoming session of the UN Human Rights Council in Geneva. Sri Lanka has been at the receiving end of a very strong report by the UN Human Rights Commissioner which recommends that a variety of punitive sanctions be utilised against the government leaders and those accused of human rights violations. It warns of the accelerating militarisation of civilian governmental functions, reversal of important constitutional safeguards, political obstruction of accountability, intimidation of civil society, and the use of anti-terrorism laws. The report also has several recommendations to the Sri Lankan government. Addressing the issue of the UN report and the recommendations it makes needs to be seen as a national issue in which the government and opposition work together without politicising the issue for their own partisan advantage.

The issues being canvassed in Geneva are primarily about matters that concern the people of Sri Lanka. The recent march by Tamil and Muslim political parties and civil society groups from east to north highlighted issues such as the takeover of land, settling of Sinhalese and construction of Buddhist temples, the neglect of families of the missing, stopping memorials to the dead, and problems faced by cattle farmers. These are matters that are in the interests of all Sri Lankans to peacefully resolve regardless of their communities and political affiliations. Just as the opposition leadership has given its support to the practice of WHO guidelines for the disposal of COVID-19 bodies it needs to give its support to the resolution of these issues of the past and the present. If the government and opposition leaderships are united in their resolve to address the grievances of the ethnic and religious minorities we can be assured that the international community will seek to support Sri Lanka rather than to engage in punitive measures.