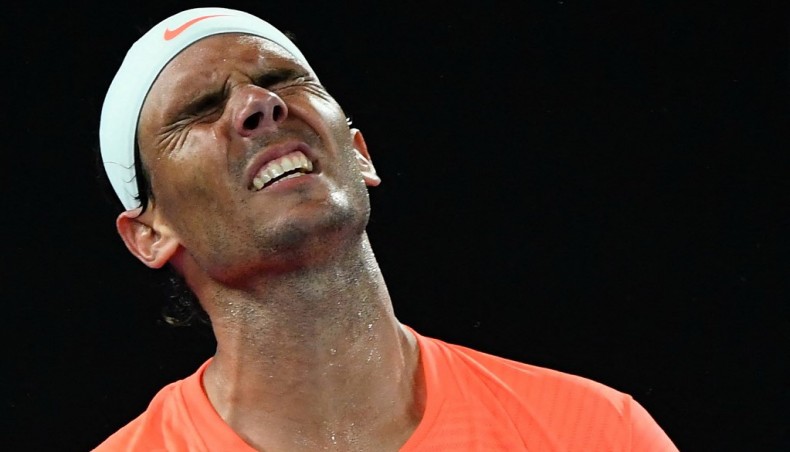 Spain's Rafael Nadal reacts after losing a point against Greece's Stefanos Tsitsipas during their men's singles quarter-final match of the Australian Open in Melbourne on Wednesday. — AFP photo

Tsitsipas, 22, stunned Roger Federer in the 2019 last 16 before being halted by Nadal in the semis, but he turned the tables to set up a last-four meeting with Russia's Daniil Medvedev.

Underlining the scale of the upset, it was only the second time Nadal has lost a Grand Slam five-setter from two sets to love after his defeat to Fabio Fognini at the 2015 US Open.

‘I don't know what happened after the third set -- I fly like a little bird, everything was working for me,’ the fifth seed said.

‘The emotions at the end were indescribable, they were something else.’

The defeat will sting for Nadal, who was drawing closer to a 21st major title and sole ownership of the all-time men's record he currently shares with the injury-sidelined Federer.

The classic encounter played out in front of 15,000 empty seats at Rod Laver Arena, with fake crowd noises added to the TV broadcast, on the last day of a snap, state-wide coronavirus lockdown.

Up to 7,477 fans -- about half capacity -- will be allowed at the centre court from Thursday after Victoria's state government eased the restrictions.

However, fans will no longer be able to see Barty, the world number one whose dreams of ending Australia's 43-year wait for a domestic winner were dashed by the unlikely figure of Karolina Muchova.

In hot conditions, Barty raced through the first set but Muchova dominated after a medical timeout for dizziness, winning 1-6, 6-3, 6-2 to reach her first Grand Slam semi-final as the Australian crumbled.

‘I was a bit lost on the court and my head was spinning so I took a break,’ said Muchova, while Barty, a semi-finalist last year, called her latest near-miss ‘heartbreaking’.

But the top seed added: ‘Will it deter me, will it ruin the fact we've had a really successful start to our season? Absolutely not.’

Muchova will face Jennifer Brady in the last four after the 22nd seed beat her fellow American and close friend Jessica Pegula 4-6, 6-2, 6-1.

Brady's achievement is notable, as she is the last woman standing among those who served a hard 14-day quarantine after arriving in Australia -- unlike other players, who were allowed out of their hotels for five hours a day to train.

‘I felt the pressure from her. She's such an aggressive player,’ said Brady, who also reached the semis at last year's US Open.

‘I was looking to push her back and get more on offense. I think I played a really good third set.’

Medvedev and Andrey Rublev were both unbeaten this year but their all-Russian quarter-final was disappointing.

Medvedev, older and higher-ranked, took control after a tight first set, winning 7-5, 6-3, 6-2 as his rival struggled in the intense afternoon heat.

‘We had some unbelievable rallies and after the point it's tough to breathe,’ said Medvedev, the 25-year-old world number four.

‘I think I'm one of the first players to make Andrey that tired on the court so I'm quite happy.’