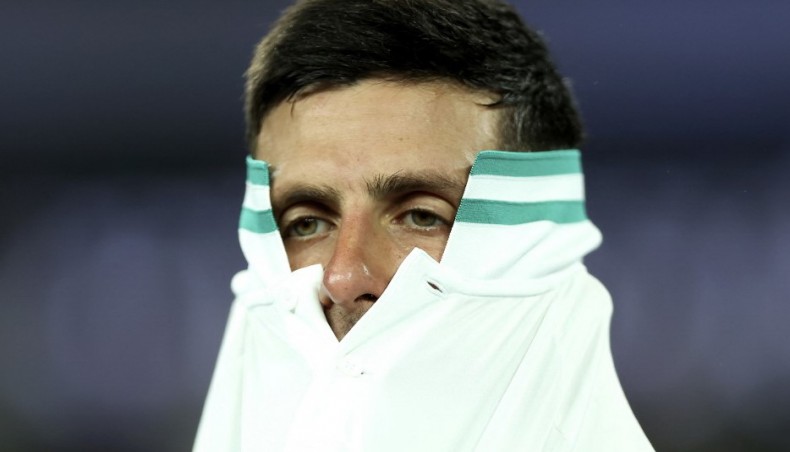 Serbia's Novak Djokovic changes his shirt after winning against Germany's Alexander Zverev in their men's singles quarter-final match of the Australian Open tennis tournament in Melbourne on Tuesday. — AFP photo

Novak Djokovic has won eight Australian Open titles but will step into unknown territory on Thursday when he faces a Russian qualifier ‘with nothing to lose’ in the first men's semi-final.

The world number one, who has been hampered by an abdominal injury, confessed that he had not seen much of tournament surprise Aslan Karatsev, but what little he did know convinced him not to take the world number 114 lightly.

‘He's impressed a lot of people with his movement and firepower from the baseline,’ said Djokovic -- who is trying to win major number 18 -- of an opponent who has only played 18 Grand Slam sets.

‘He has a flat backhand, Russian school. Great backhand. Looks to run around and also hits some good forehands to dictate the play,’ added Djokovic.

‘He doesn't have anything to lose, really. He's motivated.’

Djokovic has been battling an injury picked up in the third round, but the 33-year-old Serb semi-final will still be expected to have little trouble against the 27-year-old, who was virtually unknown before his dream-like run to the last four.

Karatsev, who is guaranteed to rise into the world's top 50, became the first man in the Open era to reach a semi-final on his Grand Slam debut, and just the second qualifier to do so at the Australian Open after Bob Giltinan in 1977.

He was also the lowest-ranked man to make the semis at a Slam since Goran Ivanisevic was ranked 125 at Wimbledon in 2001.

The pair have never played before, with Djokovic admitting he knew little of journeyman Karatsev, who spent a chunk of his youth in Israel, Germany and Spain and had failed on his nine previous attempts to qualify for a Grand Slam tournament.

‘I expect him to come out and really go for his shots and try his best and try to take that win,’ said Djokovic.

The Serbian great suffered his abdominal injury in the last-32 clash against Taylor Fritz, but battled back with the help of painkillers to win in five sets.

His injury has improved but he was hampered early in the quarter-final against Alexander Zverev, taking his frustations out by smashing his racquet, before regaining his composure to power past the sixth seed in four sets.

‘Not training on the days off... I mean, that's something that I have not ever experienced,’ Djokovic said.

‘I have never experienced this kind of injury during a Grand Slam and kind of keep going.

‘The positive thing is that I actually felt the best (against Zverev) from the beginning of the second set until the end of the match that I have since the third round against Fritz when the injury happened.’

Djokovic has won 19 straight matches at the Australian Open, but Karatsev is undaunted saying he is loving the attention and his deep run in the tournament, having emerged from virtually nowhere.

‘I got around 200 messages on WhatsApp. I think it's going to be more,’ Karatsev said after beating Dimitrov in the quarter-finals.

‘Of course, it's amazing making the semi-final from qualifying.

‘I'm just trying to enjoy the moment and play round-to-round.’