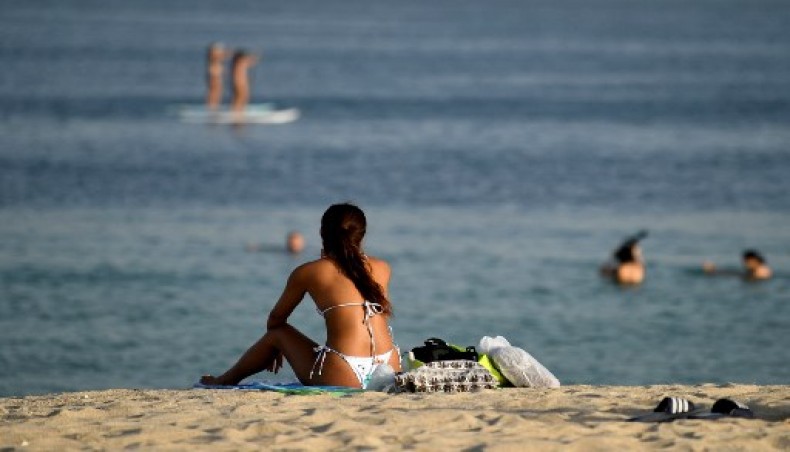 In this file photo taken on July 24, 2020, a woman sunbather sits along a beach as people stand up paddle board in the water in the Gulf emirate of Dubai. In Dubai, known for its luxury haunts and parties, expatriate singles working in the city find the quest for a partner difficult.- AFP photo

In Dubai, known for its luxury haunts and parties, Lindsey knows she has reasons to be happy. But like many young expatriates, she's sure her quest for a partner will force her to leave.

‘Even if I had the best job, I wouldn't stay,’ said the curly-haired 32-year-old French teacher who is keen on starting a family.

‘I have friends who have been here for years and all are single,’ Lindsey said as she ate sushi just ahead of Valentine's day on a restaurant terrace at the foot of the sprawling Dubai Mall.

‘Even if I'm having fun, have friends and am not alone, I'm wasting my time.’

With little of the oil wealth of its sister emirate Abu Dhabi, Dubai has built its economy with the help of legions of expatriates, who work in sectors including finance, communications, technology and hospitality.

More than 90 percent of the emirate's 3.3 million population are foreigners.

Many work menial jobs that keep the city humming, but large numbers of Arab, European and American residents form the middle class.

After being in Dubai -- one of seven emirates comprising the United Arab Emirates -- for two years, Lindsey has resorted to using the popular Tinder dating app.

But she is put off by the frequent ostentatious displays of muscular torsos and luxury cars.

‘It's possible that I won't find anyone in France either, but I think there's a greater chance there,’ she said of her home nation.

Clinical psychologist Thoraiya Kanafani said that behind the facade of all-day brunches and throbbing nightclubs, many of her clients in Dubai suffer from ‘a sense of loneliness’.

While other large globalised cities such as New York, London and Paris also present difficulties in establishing lasting relationships, she said that in Dubai -- a temporary stop for many -- the situation is exacerbated.

‘The perception that Dubai tends to be a transitory city plays a big role in people's unwillingness or difficulty in committing,’ Kanafani told AFP, adding that heartache can lead to long-term consequences like depression, anxiety and substance abuse.

Waed, 34, a Palestinian design consultant who has lived in Dubai her whole life, said she has been unsuccessful in finding love after she divorced in 2018.

She got married in 2008, she said, before ‘trashy expats’ started flocking to the emirate and people became obsessed with the superficiality of luxury living.

‘Dating in Dubai? If anyone says it's good, tell them no,’ she told AFP, adding that she was able to tolerate Tinder for about four days before dumping it.

‘I'm sure you'll find some people who want to commit, but a lot of them come here for a couple of years to make some money, build a career, have a good time and then leave.’

Many of Waed's friends have left Dubai and found love in other countries despite a ‘very good life in DIFC’ -- a lavish business district full of Instagrammable bars and restaurants.

‘One of them has a boyfriend and a dog now, the other one got engaged, and another has met someone,’ she said, adding they had opted for men who didn't aspire to Dubai stereotypes of glamour and success.

‘In Dubai you need to look perfect, to live up to standard, to have a nice car, to be able to afford fine dining... to put up a show.’

The gay community has also not been spared the difficulties of dating in the Muslim emirate, where authorities tolerate the community so long as it remains discreet.

A handful of bars are known to be gay-friendly and, while dating apps for the LGBTQ community are blocked by the government, they can easily be accessed via VPN.

‘Most of the guys I've had some kind of relationship with, I met through dating apps,’ said one 35-year-old Brazilian expat with a bright smile.

However, he too has trouble finding a long-term relationship.

People ‘want to be free in case there's somebody better out there and, as they don't see themselves living in Dubai long term, they prefer not to commit,’ he told AFP.

An executive at a multinational company, he said he will stay in the city ‘as long as it makes sense for my career’ but in the end the search for a partner could see him move on.

‘We need more than just our work to feel complete,’ he said.