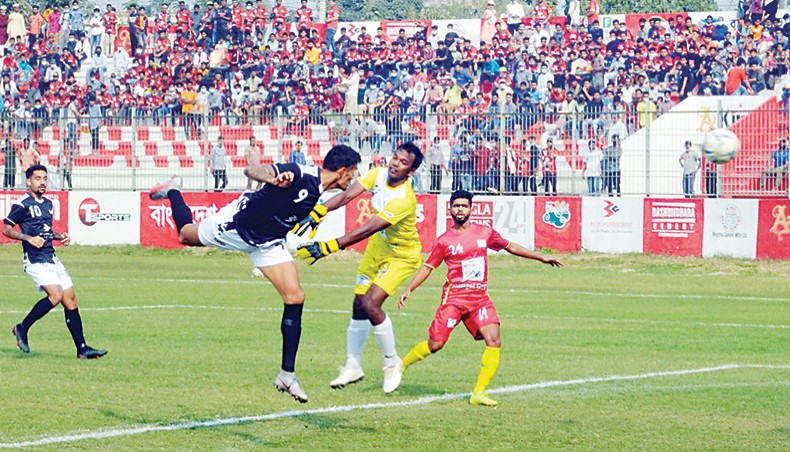 Argentine forward Raul Oscar Becerra (2nd-L) heads to score one of his three goals against Arambagh Krira Sangha during their Bangladesh Premier League match in Cumilla on Tuesday. — BFF photo

In the other matches at the Bangabandhu National Stadium, Abahani Limited beat Saif Sporting Club by 2-0 goals while the match between Sheikh Jamal Dhanmondi Club and Uttar Baridhara ended in a 3-3 draw.

For Abahani, their Brazilian midfielder Raphael Augusto Santos and Haitian forward Belfort Kervens scored one goal each after a barren first half.

Raphael scored in the 53rd minute with a header after a long throw-in by defender Rayhan Hasan before Belfort made it 2-0 in the 65th minute by placing the ball following a cross by midfielder Jewel Rana from the left side.

In the other match, league’s top scorer Jamal’s Gambian forward Pa Omar Jobe scored a brace to take his goals tally to 10.

Forward Nurul Absar gave Jamal the lead in the ninth minute before Baridhara came back in the game to tale a 3-1 lead with forward Sujan Biswas, midfielder Papon Singh and forward Sumon Reza scoring once each respectively in the 28th, 45th and 70th minutes.

When it seemed Jamal were going to suffer their first defeat in the league Jobe scored in the 73rd minute and in the final minute of the game to save his team.