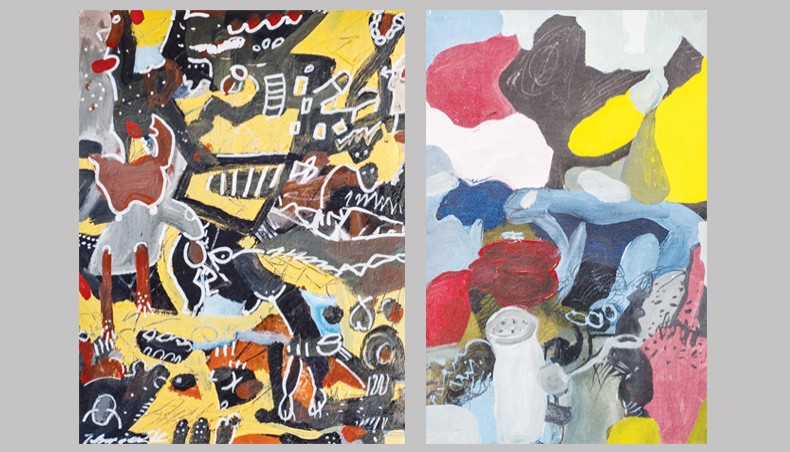 Shamset Tabrejee’s second solo painting exhibition once again makes the viewers think about how words and images correlate as the poet’s no-holds-barred imagination has filled canvasses and papers with abstract forms and fragmentary allusions to city life, nature and more.

After a survey of the works at Gallery Dwip in the capital’s Lalmatia, the poet’s expressionistic language seems slightly nervy. In a roundabout manner, the paintings showcase his experience during the COVID-19-induced situation.

The 15-day exhibition titled Random Vignettes features 57 paintings and they testify to the fact that Tabrejee comfortably straddles the line between the real and the imaginary. Curated by artist and writer Mustafa Zaman, the exhibition bears the imprint of the artist’s passion for colour and a life lived amid the bustles of the capital city.

‘I created the paintings during the COVID-19 outbreak. I was forced to isolation and started painting. I have worked on more than 100 canvases. I put my imaginations and thoughts onto the works. Most of the works are abstract as I approach with a certain kind of freedom to gradually arrive at what I want to create. I never did anything according to a plan. And this exhibition is no exception,’ Shamset Tabrejee told New Age.

Being as prolific as any artist of repute in the country, Tabrejee’s source of inspiration has always been lived experience. During the lockdown situation that compelled him to remain at home, the poet turned artist found a way to add meaning to an otherwise hopeless emergency situation by churning out paintings of exuberant colours and myriad different forms, according a press release issued by the gallery.

The majority of the works are abstract and those that depict human forms seem to push them into the world of caricature. They randomly explore forms and fragments as opposed to portraying particular subject matters.

An untitled diptych shows two human figures looking like monsters as if the artist is depicting the cruelty of human being in the contemporary context.

Another untitled painting shows human faces, eyes and a mug amid various lines, forms and shapes. The chaos either eternalises the psychological state of the artist or addresses the chaos that Dhaka has turned into over the last two decades.

There is an array of works in the second room of the gallery where a set of abstract canvases alludes to nature, not by depiction but by allusion to forms and colours. These works beguile the eye. While some give a sense of depth and chiaroscuro, others remind the viewers of mid-twentieth century colour field paintings where the surface itself became a way to recall nature.

The exhibition will remain open till February 26 from 3:00pm to 9:00pm except Mondays.