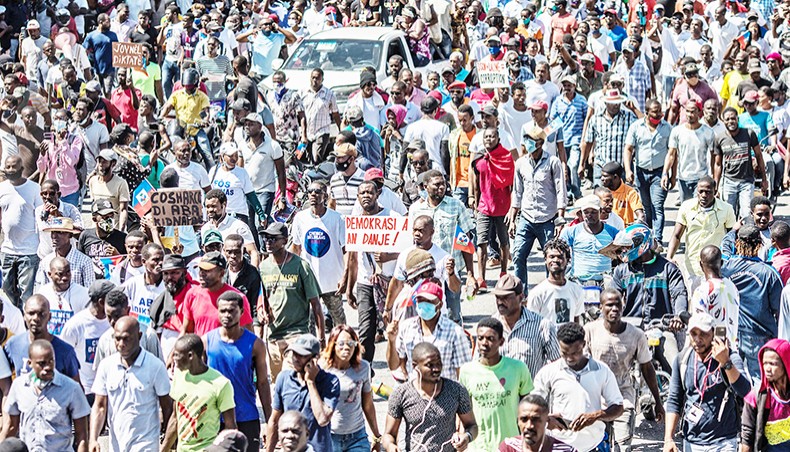 The protests were mostly peaceful, although a few clashes broke out between some demonstrators and police, who fired tear gas and rubber bullets.

Protesters waved the national flag and chanted, ‘Down with the dictatorship!’

Officials loyal to Moise claimed last Sunday they had foiled an attempt to murder him and overthrow the government. Police arrested 23 people, accusing them of an ‘attempted coup.’

Moise has been ruling by decree for a year because there is no parliament right now. Legislative elections due in 2018 were delayed.

He also maintains that his term lasts until February 2022 — but the opposition argues it should have ended last weekend, in a standoff over disputed elections.

The dispute stems from Moise’s original election. He was voted into office in a poll subsequently cancelled after allegations of fraud, and then elected again a year later, in 2016.

The issue has led to weeks of violent protests on the streets of the poor Caribbean country.

The United States has backed Moise’s position, with State Department spokesman Ned Price saying on February 5 that ‘a new elected president should succeed president Moise when his term ends on February 7, 2022.’

Sunday’s protests questioned the legitimacy of Moise’s term length and foreign backing for his holding office.

‘Despite all the kidnappings, the massacres in poor neighborhoods, the United States continues to support him,’ said protester Sheila Pelicier.

‘The money from the PetroCaribe fund has been squandered, we don’t have good hospitals... and the United States continues to support this corrupt government,’ Pelicier said, referring to a loan program whose funds the Haitian government has been accused of mismanaging since 2008.

Police officers also fired live ammunition into the air in Petion-Ville, a wealthy commune in Port-au-Prince where a car was set on fire.

The notorious Francois ‘Papa Doc’ Duvalier and his son Jean Claude ‘Baby Doc’ ruled Haiti from 1957 until 1986 with their ruthless Tontons Macoutes militia.