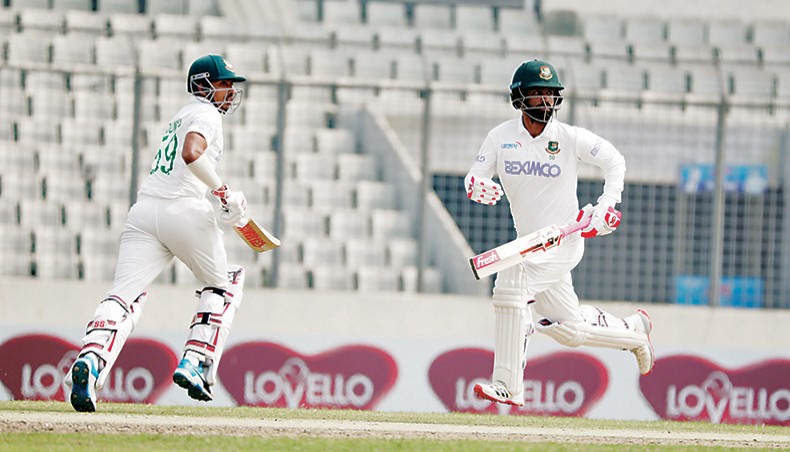 Bangladesh openers Soumya Sarkar (L) and Tamim Iqbal run between the wickets on the fourth day of their second Test against West Indies at the Sher-e-Bangla National Stadium on Sunday. — BCB  photo

4 — West Indies won the second Test by 17 runs to clean-sweep Bangladesh 2-0 in the two-match Test series on Sunday, which is only the fourth time the Caribbean side has won all matches in an away Test series. West Indies had earlier clean-swept the same opposition twice in 2012 and 2002. Before that, they won a five-Test series against England 5-0 back in 1984.

10 — For the first time since 1956, West Indian spinners have taken all opposition wickets in a Test innings on Sunday as all 10 Bangladesh wickets of the second innings of the Dhaka Test fell to spinners on Sunday. Rahkeem Cornwall claimed four while Jomel Warrican and skipper Kraigg Brathwaite took three each. The last time it happened was against New Zealand at Christchurch.

14 — Tamim Iqbal and Soumya Sarkar formed a 59-run opening stand for Bangladesh in the fourth innings of the second Test on Sunday, which is Bangladesh’s first 50-plus first wicket partnership in 14 innings. The last time it happened was against New Zealand in Wellington back in March 2019, where Tamim and Shadman Islam put together 75 runs in the first innings.

15 — Bangladesh were clean-swept for the 15th occasion in Tests on Friday, when West Indies won the second Test by 12 runs at the Sher-e-Bangla National Stadium in Dhaka. Bangladesh has conceded the most number of clean-sweeps in the format than all other Test playing countries, eight more than second placed Zimbabwe.

117 — Bangladesh bundled out West Indies for 117 runs in the second innings of the second Test on Sunday, which is the third lowest innings total against Bangladesh in Tests. The lowest team total also belongs to West Indies, as they were all out for 111 at the same venue on November 2018.– New Age