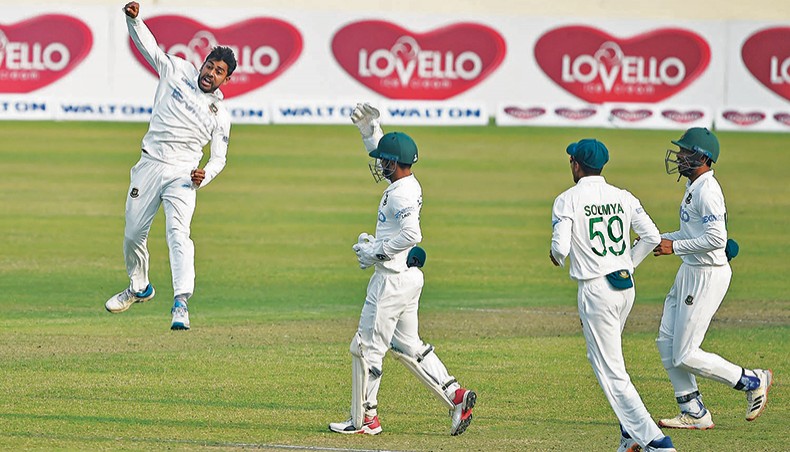 Bangladesh spinners hold the key in Dhaka Test with the match evenly poised after day three at the Sher-e-Bangla National Stadium in Dhaka on Saturday.

Bangladesh spinners troubled West Indies in the 21 overs they got to bowl on Saturday, with Mehidy Hasan, Nayeem Hasan and Taijul Islam taking one wicket each to reduce the visitors to 41-3 at stumps.

West Indies is already leading by 154 runs and Bangladesh’s best chance off pulling off a win will be to keep the target around 250.

Bangladesh will be looking towards their spin trio to claim the remaining seven wickets without leaking too many runs so the batsmen could have around five sessions to chase the target on a Mirpur pitch that hasn’t crumbled up as it usually does at the venue.

Mehidy said that they will be looking to take the remaining wickets as early as possible.

‘Now, our only target is to all out them as early as possible,’ Mehidy told the media after the day’s play on Saturday.

‘Scoring runs will be difficult on this wicket, won’t be easy like the first innings. The ball is turning, getting low. On the fifth day things will be more difficult, it is always difficult to bat on the fourth and fifth day here in Mirpur.

In the previous match in Chattogram, West Indies showed that any target is achievable if the batsmen play according to their potential with courage.

Bangladesh need to take a leaf out of the opponents book to bounce back in the Dhaka Test and level the series 1-1, thinks Mehidy.

‘Anything can happen in cricket. Not even in our dreams we thought that we could lose the game from that point. We thought either we will be the winners or the match will end in a draw,’ Mehidy said.

Previously, the spinners have come to Bangladesh’s rescue in critical situations and have proved to be the trump card in a Test match.

In the 2016 Dhaka Test against England, the English side was cruised to 100-0 chasing a 276-run target thanks to openers Alistair Cook and Ben Ducket.

But Mehidy and Shakib Al Hasan then ran through their batting line up in the last session of day three, claiming six and four wickets respectively, to give Bangladesh its first Test win over England.

Bangladesh is without Shakib in this match, but the experienced Taijul and rookie Nayeem is in the team and Mehidy believes the trio has the ability to replicate what they did against England on the morning session of day four.

‘I think if we bowlers can restrict them within 150-200 runs, then there will be an opportunity. We will still have to chase 300 runs on this wicket which will not be easy. But if our senior players perform, nothing is impossible.’