We are in driver’s seat: Cornwall 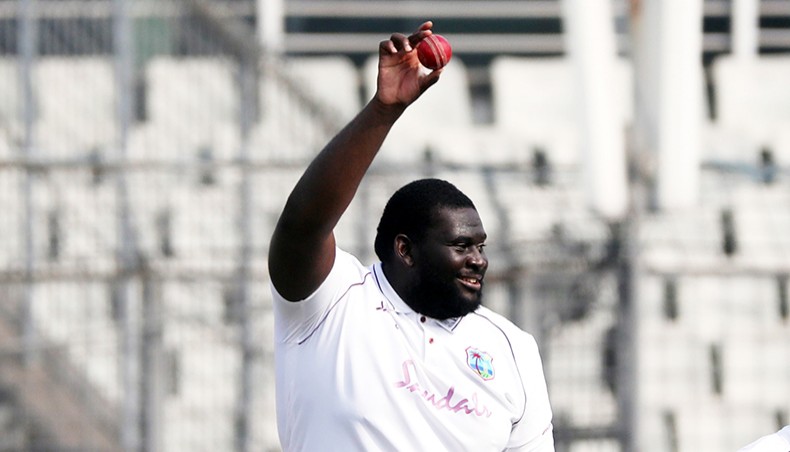 West Indies off-spinner Rahkeem Cornwall  shows the ball after taking his fifth wicket on the third day of their second Test against Bangladesh at the Sher-e-Bangla National Stadium on Saturday. — BCB photo

West Indies off-spinner Rahkeem Cornwall thinks that they are in a better position in the Dhaka Test heading into the penultimate day and hopes that their batsmen will set up a target in excess of 400 for Bangladesh.

‘I think we are slightly in the driver’s seat. Tomorrow [today] is an important day for us. We just have to bat well in the first hour,’ Cornwall said after the day’s play on Saturday.

‘We have to be in a reasonable position at lunch so that we can set a reasonable target for Bangladesh. We can have a run at Bangladesh in the end [of the day]. Anything over 400 will be comfortable for us,’ he added.

After dismissing skipper Mominul Haque on the second day, Cornwall took four wickets on Saturday to complete his second five-wicket haul in Tests.

Cornwall was happy that he could play his part in placing his team in an advantageous position after day three.

‘It is always a good feeling to take five wickets. I helped put the team in a good position to win the team.

‘Plan was to keep things simple, be patient and put the balls in the right area. I think the way our batsmen set up the game the day before, we knew that the bowlers had to do a good job today [Saturday],’ Cornwall said.

Cornwall said that he enjoyed bowling in Dhaka more than Chattogram as the pitch at the Sher-e-Bangla National Stadium had more bounce in it.

‘The wicket gave me some bounce, some of the ball spun. I just had to work with that.

‘The ball bounces a bit more in Dhaka. There was not much bounce or spin in Chittagong [Chattogram]. I got a bit more purchase here. I worked with what I get, with whatever pace I get out of the wicket, I use it as my strength.’