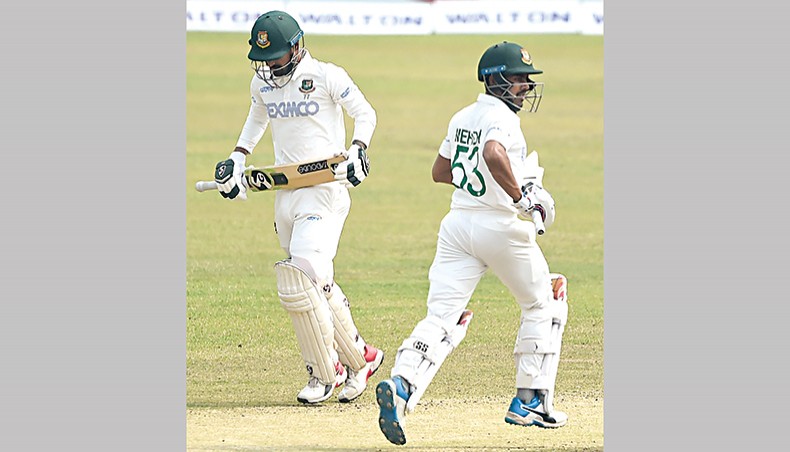 Bangladesh batsmen Liton Das (L) and Mehidy Hasan run between the wickets on the third day of their second Test against West Indies  at the Sher-e-Bangla National Stadium on Saturday. — AFP photo

5 — Rahkeem Cornwall became the first Caribbean off-spinner to claim a five-wicket haul against Bangladesh in Tests after finishing with 5-74 in the second innings of the second Test on Saturday. This was Cornwall’s second five-for in Tests as his maiden five-wicket haul came against Afghanistan on November 2019 in Lucknow.

10 — For the first time ever, all 10 Bangladesh batsmen were caught dismissed in an innings of a Test match during their first innings of the second Test against West Indies on Saturday. Kyle Mayers, Nkrumah Bonner, Kraigg Brathwaite and Jermaine Blackwood took two catches each while wicketkeeper Joshua Dal Silva and Shayne Moseley took one catch-a-piece in Bangladesh’s second innings at the Sher-e-Bangla National Stadium in Dhaka.

100 — Mehidy Hasan took one wicket on the final session of play on Saturday to become the fourth Bangladeshi bowler to claim 100 wickets in Tests. He joined Shakib Al Hasan, Taijul Islam and Mohammad Rafique. He is also the quickest to reach the milestone, taking only 24 Tests to amass 100 wickets, which is one match less than the previous quickest Taijul. The off-spinner is also the only non-left-arm spinner in the list.

126 — Liton Das and Mehidy Hasan put together a 126-run partnership for the seventh wicket against West Indies on Saturday, which is the highest seventh wicket stand in Tests between the two sides. They surpassed compatriots Nasir Hossain and Mahmudullah, who made 121 runs at the same venue on November, 2012.

1000 – Wicketkeeper batsman Liton Das top-scored in Bangladesh’s first innings of the Dhaka Test against West Indies with 71 and in the process became the 15th Bangladeshi player to amass over 1,000 runs in the longest format of the game. He needed 34 runs to reach the landmark and he ended the first innings on 1037 runs. Liton reached the milestone in his 22nd Test and also has seven fifties in Tests.