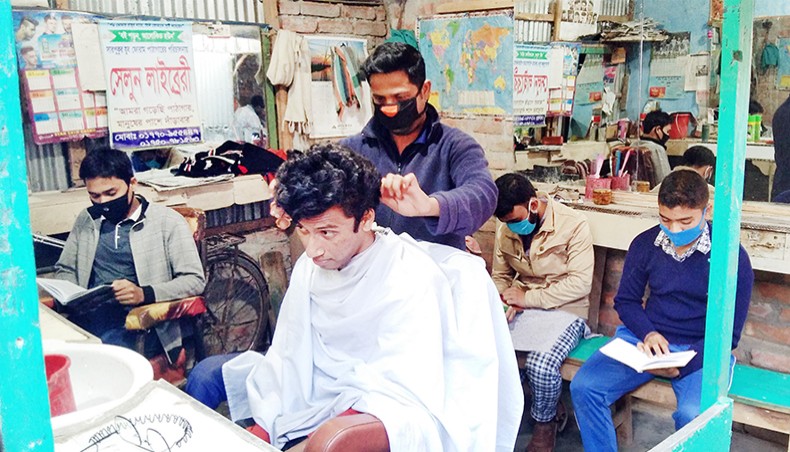 Libraries are quintessential in shaping the psyche of a community. Apart from public and institutional libraries, there are a lot of community-oriented libraries that cater to their specific communities with specific demands in mind. Mashiur Rahman talks to the minds behind five such libraries

LIBRARY is the place where books are stored. People can go there to read. Some libraries are open to lending books, some are not. Usually, educational institutions have libraries within their structure. The government also set up public libraries in different administrative areas which are open to all.

In Bangladesh, the public and university libraries are often seen packed with readers. But most of the time these readers come to the library to find a quiet place with their own public service exam guide books. Seeking a job is necessary, but seeking knowledge is also necessary.

According to Albert Einstein, ‘Imagination is more important than knowledge’. And what can instigate more imagination than a good book of literature, history, science — or colloquially speaking — an ‘out book’?

WHEN he was in class 8, Jamal Hossen discovered that there is no public library in his upazila Aditmari in Lalmonirhat district. He needed a book of poetry as he got interested in recitation, but he could not found any. After that, he, along with his friends, established Sarpukur Youth Forum Library with 10 books. The library now has more than 6,500 books.

For putting at the salons Jamal selects the books that can be finished in 30 to 50 minutes, as that is the average time a customer has to wait for getting their turn. Now Jamal gives books to 30 salons located across Aditmari upazila. The books are changed within one to two weeks.

Jamal dreams of bringing substantial social change through his salon library movement and he inspires others from different districts to start similar movements there.

SHEKH Muhammad Atif Asad is an undergraduate student of botany based in Jamalpur. When Asad was a higher secondary level student, he started a library with only 20 books at his home named Shaheed Milon Memorial Library. Now the library has more than 2,500 books. But Asad did not get satisfied by establishing only one library.

He anticipated a movement and found some like-minded people to collaborate with. With them, he started a library at Tarakandi Rail Station. As Asad and his mates did not have the fund to hire staff for the library, they put the bookshelf in a tea-stall. They adopted the slogan ‘book for tea’, suggesting if someone orders tea from the stall the person will be offered a book to read. Of course, they are not stubborn and give people the chance to read books even if they do not order tea. But they encourage people to order tea so that the tea-stall owner can also stay motivated for accommodating the library in the stall.

People loved the initiative very much and Asad and his team started getting help from various sources. They have a plan to establish at least 100 station libraries in the first phase and spread the movement all over the country.

A HISTORY graduate from Dhaka University, Niswi Mong Marma felt the urgency to spread the light of knowledge and imagination to the children and youths of the place from where he came, Bolipara union, Thanchi, Bandarban. In 2018 he established Gyanosri Mohatheoro Library at Karuna Shishu Sadan, an ashram that accommodates students.

When Niswi Mong was in high school rarely get any exposure to any book outside of the textbooks. But when he moved to Dhaka for education, the world of imagination got opened for him. Niswi Mong thought how great it would be if in his childhood he had the access to a library where books of science, philosophy or literature could be found.

He took permission to establish a library at the ashram from the ashram chief and started collecting book by mainly sourcing books through Facebook. Now the library has more than 1,100 books.

During the high time of the COVID-19, Niswi Mong stayed at the ashram full-time. There he made the children and youth interested in reading books by making them listen to him reading out from the books and telling the gist of the stories.

Niswi Mong has a dream for transforming the library into a large reference library in the next 50 years.

WHEN Abdullah Al Mamun was a high school student in 2007-08 he dreamt about establishing a community public library at the place he belongs to, in Kutupur union, Narayanganj. But due to financial constraints and different obstacles, he could not fulfil his dream then. Later in 2017 when he was a university student, he started a library with some of his friends. They started the library with the books they already had and by sourcing books from their teachers and some other people. Now the library has 600 to 700 books.

The motivation for starting the library came from observation. He and some of his friends felt that the area they live in has a school, college, madrasa, mosque, everything, so why not a library where youths can go and get enlightened. His team sought help from the government and everyone. But the respective government authority demanded a large amount as a bribe for even registering the library for government help.

Quite distressing, most of the people discouraged them to go with the initiative. But Mamum did not stop. He tried to involve primary local school students with the library by organising yearly events and tried various ways to attract people to the library.

Mamun has a plan to expand the library by developing a fund so that the library does not have to financially depend on anyone.

IN 1989, Ali Nayeem became the member of Shahidullah Kaiser Memorial Library right after its inauguration. His father was directly involved with the establishment of the library. Veteran Marxist politician Doliler Rahman Dulal was one of the main organisers of the library who inspired others to join the initiative.

From its beginning, the library was community-oriented and always tried to involve the children and youth of the economically marginalised community. Since its inauguration, the library has built the habit of reading among many people, and some of them have done wonderful things. One of the members of the library has travelled the country by bicycle and wrote a book on the experience.

Mashiur Rahman is a contributor to the New Age Youth team.