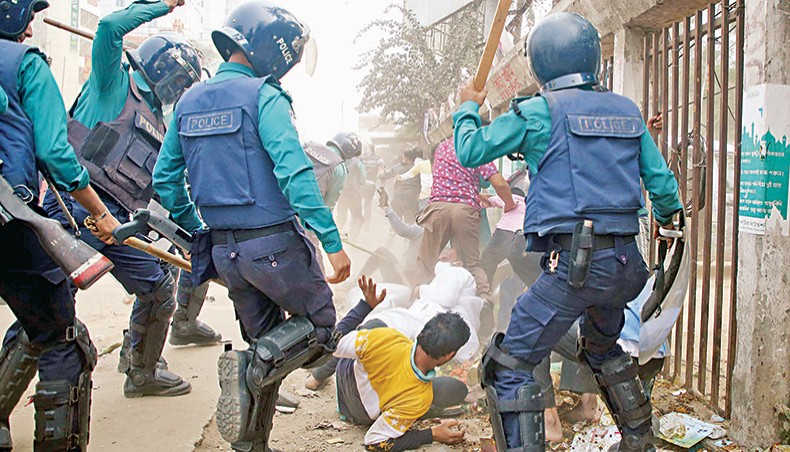 Police charge batons on BNP leaders and activists during a rally of the party in front of the National Press Club in Dhaka on Saturday. — Sony Ramany

Police on Saturday attacked opposition Bangladesh Nationalist Party leaders and activists towards the end of a protest rally in front of the National Press Club in Dhaka.

Over 125, including eight police members, were injured in the police attack and the response by BNP activists to the attack.

The Dhaka South and North city units of the BNP organised the rally as part of its demonstration in all the cities across the country against the government move to cancel BNP founder and late president Ziaur Rahman’s gallantry award Bir Uttam given for his heroic role in the country’s liberation war.

When the rally was nearing its end at about the noon with the party standing committee member Khandaker Mosharraf Hossain’s speech as the chief guest halfway through, police personnel suddenly, blowing whistles, launched baton charges at the party’s leaders and activists, witnesses said.

As the police baton-charge began, junior leaders and activists of the party took away senior leaders, including Khandaker Mosharraf, Gayeshwar Chandra Roy and Amanullah Aman, inside the press club premises by creating a human shield around them, they said.

They said that police dispersed most of the party leaders and activists from the venue within a few minutes but some BNP activists started throwing brickbats and other objects that they found there on the police personnel who attacked them.

As the BNP leaders and activists were dispersed, a good number of slipper sandals, other types of footwear and torn pieces of paper left by the fleeing opposition activists were found on the venue.

Police cleared the venue in 15 minutes and the vehicular movement on the road resumed at about 12:30pm, they said.

‘It was about noon. Khandaker Mosharraf sir was delivering his speech. I suddenly heard a commotion at the Kadam Foara end of the rally and in no time saw that police members started baton charges at our leaders and activists,’ said a participant in the rally, who was also injured in the police attack.

Though the rally was scheduled to begin at 10:00am, leaders and activists of the party and its front organisations had begun to gather in the area since 8:30am.

A huge number of police personnel in riot gear were deployed around the venue with a water cannon.

The traffic movement between Purana Paltan and the Kadam Foara ceased as several thousand party leaders and activists gathered there with police members putting barriers at the ends of the section of the road and at the Secretariat point.

They allowed almost none to enter the demonstration venue while the rally was in progress.

Shahbagh police station officer-in-charge Mamunur Rashid told New Age that they had picked up 18 people from the venue, adding that at least eight cops were injured by BNP activists.

He claimed that the BNP activists attacked the police personnel prompting them to go into action to disperse them.

The police officer at about 8:30pm further said that filing a case against BNP people was under process for attacking the cops.

After the attack, BNP senior joint secretary general Ruhul Kabir Rizvi in a press briefing at the party central office at Naya Paltan termed the police attack on their peaceful rally a cowardly act.

The BNP rallies in Chattogram, Khulna, Barishal, Rajshahi, Sylhet, Mymensingh and Rangpur were peaceful, according to the New Age correspondents in those districts.

Addressing the Dhaka rally, senior BNP leaders said that nobody had the right to cancel the gallantry award of freedom fighter Ziaur Rahman.

Party standing committee member Khandaker Mosharraf called upon all to unite in the movements to end what he said the misrule of the Awami League government.

Ziaur Rahman initiated the War of Independence in 1971 and he was also the commander of the Z Force, said Mosharraf, adding that he was honoured with the gallantry award Bir Uttam for his valiant role in the war.

‘So, you have no right to cancel his award,’ Mosharraf said.

Referring to the initiative of the Jatiya Muktijoddha Council to revoke the award, Mosharraf said that they had no right to do that.

Another standing committee member, Gayeshwar Chandra Roy, said that Ziaur Rahman not only proclaimed the war of independence, he also actively took part in the war risking his life for the sake of the motherland.