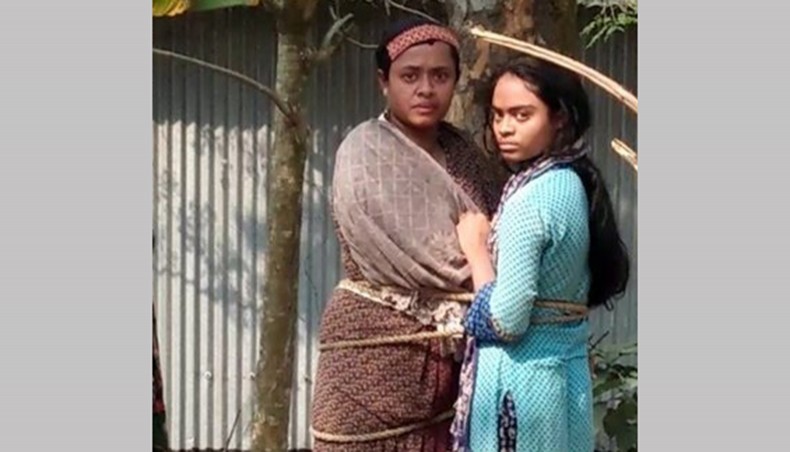 A woman and her daughter are tied to a tree at Kaliakoir in Gazipur on Thursday as they failed to pay back loans. — New Age photo

A woman and her daughter were beaten and tortured tying to a tree at Kaliakair in Gazipur on Thursday, as they failed to repay loans taken from local creditors.

Police on Friday said that they had arrested a man, named Sabuj, for reportedly taking part in the torture incident.

Locals said that the woman in her forties and her Class X student daughter were tied to a jackfruit tree in front of her house at Sirajpur village at about 10:30am on Thursday and beaten up mercilessly by a creditor and his associates.

The woman admitted that she had borrowed some money from creditors, and she was trying to pay off the loans in due time, but a creditor and his people attacked her house and tortured her and her daughter.

Locals added that the creditor attacked the house on suspicion that the family was trying to leave the area without repaying the loan.

The woman said that she borrowed the money and gave to a fraudster, who claimed that he was the lord of jinns and he would return a huge amount of money to the woman if she gave him the money.

The fraudster took the money and fled away, she said adding that she was trying her best to pay off the loans.

The woman works as a garment worker after the death of her husband five years ago.

Kaliakair Police Station officer-in-charge Monwar Hossain Chowdhury said that the police personnel were sent to the spot and a case was filed.