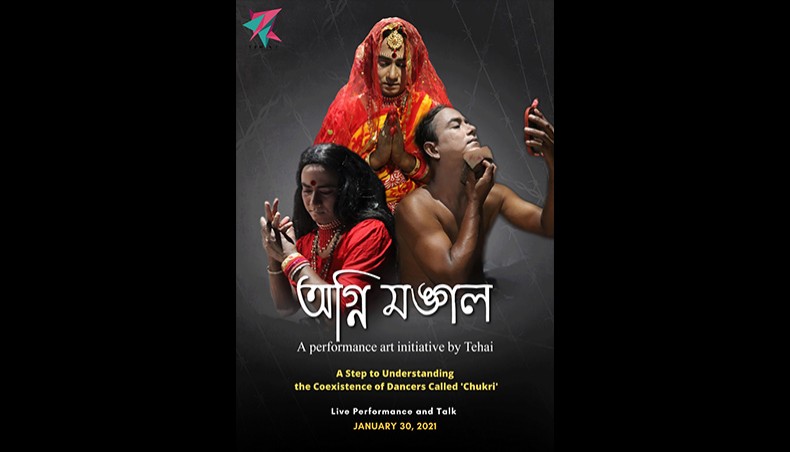 A poster of Agni Mangal, a performance art initiative by Tehai based on the fire god Agni. — MHS

Agni Mongol was staged twice on 30 January at a studio in Lalbagh called Tehai. Tehai is an interdisciplinary art initiative which embodies a crossover between several disciplines. The deep essence of the dance performance illustrated the journey of a dancer and the achievements in this eventful journey for the dedication and hard work, writes Tanvir Alim

THE show Agni Mangal started with intense interaction with the audience at Lalbagh. The performer Rajani Raoja with a white costume wrapped the face with a white bandage and went to the audience sitting around the centre with a piece of colour paper asking them to write a word beyond man and woman.

In exchange, Rajani Raoja also knotted a rakhi in all of their hands to celebrate brotherhood and love. The audience could explore that the rakhi was containing different conversations full of judgment, hatred and bullying that he collected from dating apps. Later Rajani Raoja cut the costume with a pair of tiny scissors from and small pieces of coloured paper sprinkled out.

At this very moment, Rajani Raoja collected all the papers from the audience and burnt them in a lamp. The performer then wore the mask of Agni which is twice as big as his head with orange flames on top of the mask and started dancing. The transformation was thrilling as gathered from the responses of the audience.

Agni is the Hindu god of fire, son of Aditi and Kashyapa, and husband of Svaha. Agni was quite literally created from fire. In one poem in the Vedas, Agni’s parents are two sticks whose friction creates fire — Angi. It is interesting to note that two sticks rubbing together were also a symbol of lesbian love. He had a relationship with the god Soma and one story in particular notes how Agni received Soma’s semen into his mouth.

Rajani Raoja later explained that dating app was always a traumatic experience especially during the lockdown. According to Rajani Raoja, it always forces us to hide our real identity and present an image that is constructed as well accepted by the mainstream heterosexual society. Through the performance, Rajani Raoja brings the ultimate question to the audience about masculinity and its construction.

Agni Mongol was staged twice on 30 January at a studio in Lalbagh called Tehai. Tehai is an interdisciplinary art initiative which embodies a crossover between several disciplines like research, performance, film, theatre, dance, recitation and literature and offers an independent platform for artists.

The second part of the show which has no integrative congruence with the other part was ‘The Tales of Sarees’ which is a research-based dance performance on MSI’s life and coexistence in the society, introduced the dancer MSI who came for a residency from Bheramara, Kushtia in this studio. MSI is a Chukri dancer from Bheramara and the dance performance was all about narrating the life of a Chukri dancer.

Chukri dance (literally, dance by young girls) featuring youths playing the roles of women, accompanies songs and has been in vogue in Bengal for a long time. This dance is performed on a canopied stage in a mango grove or an open field. It is directed by a master who leads a fairly large team of singers, musicians, and players. The musicians seat themselves on the sides of the stage and provide the music for the songs and dance. Others stay in the dressing room and wait for their cue. Young boys dressed as girls take part in this dance.

The deep essence of the dance performance illustrated the journey of a dancer and the achievements in this eventful journey for the dedication and hard work. During the residency, MSI composed several songs with the same tune of different folk performances however the text of these numbers was all recreated from looking back to the life. The dance performance ended with a crossed mindset of MSI where MSI’s eighteen years old son asked the father not to wear sari anymore and MSI is in a fix. Will the eventful journey of MSI with sari end now after thirty years for the son?

During the discussion afterwards, it came out that Agni was narrated as bisexual in many of the texts but it did not do a proper judgment of defining bisexual people and their nature. In different narratives such as Bedh says Agni is white like the sun. The costume designer of the performance has chosen orange and pink as the colour of their costume. The props as well as the jewellery of the performance were collected from the surrounding areas of Old Dhaka which gave it a special flavour.

When MSI was in sixth grade, MSI was the best football player in Bheramara. MSI started dancing at the age of 12 when a master Akbar Ali came to the next village for their group performance and asked MSI to perform in the stage. It was a play called Kajal Rekha. People were scolding Akbar Ali as he has chosen a young boy like MSI to perform on stage. Later through dedication, MSI learnt the moves of this particular dance form by drawing blocks on the ground which was presented in a large piece of paper in that evening. MSI was dancing on that where the lyrics and many other calculations were roughly introduced.

At that time, MSI was asked to leave the house as no one in their family was into dance. MSI started living in the master’s house and after a month, the family realised that MSI won’t leave the dance-floor ever so they accepted MSI saying, ‘You can perform in the group and dress as you like but there should not be any rumour around your performance ever.’

Now MSI is 50 years old and his group has ten members where the group is known as ‘Ali Gayener Dol’. All the Chukri identified people in that locality have their own families and they perform female characters in different performances titled Poddopuran, Nosimon et cetera. MSI mentioned, ‘My in-laws saw my performance before we got married and they have never complained.’

The coexistence of the Chukri identified people in their community might look very colourful from a distance but it might not be the same in their lived reality. If they have no call for the performance, they work as a construction worker or in the fields with the farmers. People in that locality strongly believe that the performance can heal them from snake bites and many other evil eyes surrounding them.

This dance performance is designed to understand the coexistence of dancers called Chukri by taking those narratives to the audiences. In the discussion after the performance, the audience present there brings out the western frameworks such as bisexuality, third gender, LGBT, rainbow et cetera which are mostly generated from their disrupt eurocentric approach to illustrate the context of the performances. However ambiguous identities without any name were existing in the subcontinent even before the colonial periods which can be perceived form their existence. Amara Das Wilhelm’s book Tritiya-Prakriti: People of the Third Sex, compiles years of extensive research of Sanskrit texts from medieval and ancient India and proves that homosexuals and the ‘third gender’ were not only in existence in Indian society back then, but that these identities were also widely accepted.

When asked about it, prominent researcher, dancer, cultural activist Lubna Marium said, ‘I know that Agni Mangal addresses the issue of multiple identities within each of us and does not focus on sexual orientation, but it is obvious that the LGBT issue is the underlying meta-narrative.  Also, the issue of chukri dance should not be conflated with the issue of identity. Chukri dance is a well-accepted genre of dancing. Though subliminally identity issues are part of that discourse too, we should not jeopardise the public acceptance of chukri dance by bringing that into the discussion.’

The performance Agni Mangal will take place again at the end of March and Tehai offers residency for artists to exchange views and experiences.

All together the two performances can be narrated as imagery to orientalise and reconcile colonial knowledge production however ambiguous identities are coexisting in our folklore from long before. This might be very difficult for the urban audience to internalise from such cultural practice against the existing identity politics and its discourse because of the political oppression that we inherently keep floating around. As an audience, the question that remains after the performance is the agency and ownership of the performer in front of the audience and the kind of epistemology that it tries to produce through participatory action research. Will that be able to make a vigilant deconstruction of our post-colonial hegemonic culture of hyper-masculinity?

At the end of the interview, MSI said, ‘In my village, they call me “artist MSI”. My brothers are well educated but no one knows them. I am well known all around the district. Like all, I also like it when people call me an artist.’

Note: The author avoided using he and she in this text intentionally to keep the coherence with the gender ambiguity of the tradition. Due to security, the names of the original performers are not mentioned here.

Tanvir Alim is a community organiser and archivist based in Dhaka.