DB presses charge against Irfan, 4 others 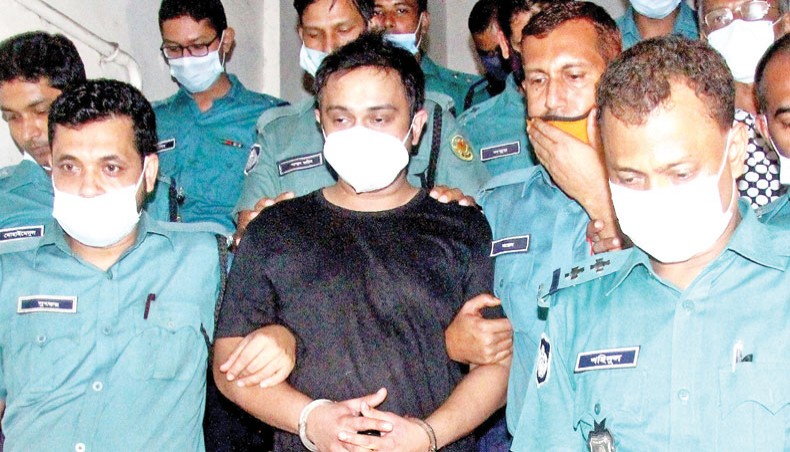 The Detective Branch on Thursday filed a charge sheet against Irfan Salim, son of ruling Awamil League lawmaker Haji Salim, and four others on charge of assaulting a navy officer in Dhaka in October 2020.

Irfan, suspended from the ward-30 councillor post of  the Dhaka South City Corporation, has been named as the prime accused in the charge sheet, said officials.

The four others are his bodyguard Zahidul Islam, associates AB Siddque Dipu and Kazi Ripon and driver Mizanur Rahman.

Irfan, now in jail, and three others were arrested after the incident while Kazi Ripon has remained fugitive.

Navy Lieutenant Wasif Ahmed Khan filed the case on October 26, 2020 against Irfan and his associates for assaulting him at the Kalabagan crossing the night before after Salim’s car had hit the officer’s motorbike.

The Rapid Action Battalion carried out a nine-hour-long raid at Haji Salim’s house in Dhaka’s Old Town following the incident and recovered firearms and drugs. RAB filed two separate cases each against Salim and Zahidul.

The Chawkbazar police, however, relieved him from the charge and pressed the final reports in early January in two cases of possessing illegal firearms and drugs in a Dhaka court, citing ‘insufficient information’ in the first information report filed by the RAB.

A Dhaka court also granted bail to Irfan in two cases filed over illegal possession of walkie-talkies and consumption of liquor.