Injury-hit Bangladesh look to claw back 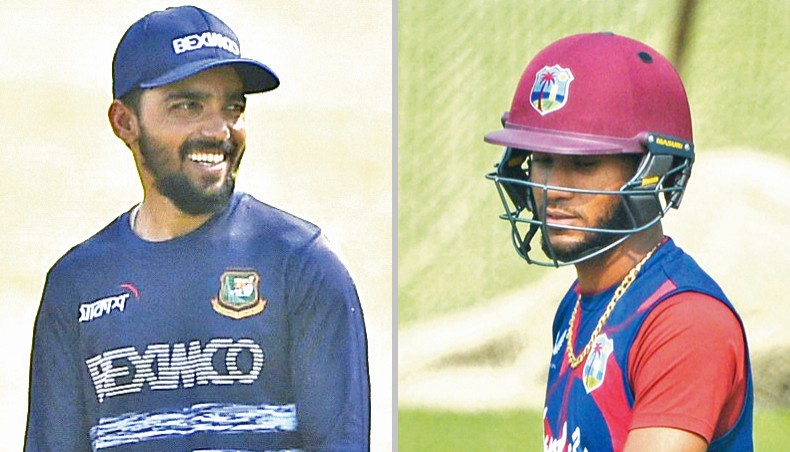 Injury-hit Bangladesh will take the field against a buoyant West Indies side today for the second and final Test of the series at the Sher-e-Bangla National Stadium in Dhaka with hopes of bouncing back from their shocking three-wicket defeat in the first Test.

The match will begin at 9.30am and will be televised live by T Sports, Nagorik TV and BTV.

Bangladesh team is still processing their defeat in Chattogram where West Indies chased down 395 runs on the fifth day, the highest successful chase in Test cricket on Asian soil.

The Bangladesh camp received two more blows after the match as star all-rounder Shakib Al Hasan and opener Shadman Islam both have been ruled out from the Dhaka Test for their respective injuries.

Shakib’s absence from the Test was expected as he could not take any further part in the Chattogram Test after injuring his thigh on the second day.

Bangladesh Cricket Board confirmed his unavailability a day after the Test and named Soumya Sarkar as his replacement in the squad.

Shadman, who made 59 in the first innings, got ruled out of the Test on Wednesday due to a hip injury.

Bangladesh now will have to make some forced changes in the playing XI and will have to overcome the mental scar of the Chattogram Test defeat but skipper Mominul Haque believes the entire team is ready to put the past behind and vie for a win in the second Test.

‘It’s better not to think about what’s already in the past. We want to take the positives form there and move ahead. By the grace of Allah everyone is positive. Inshallah, we want a positive result from tomorrow [today]’s match,’ Mominul said in the pre-match press conference on Wednesday.

Mominul thinks inexperience of defending a total on the fifth day pitch with little help for the spinners was the main reason behind losing in Chattogram.

‘I think we have never encountered a situation like that before. We can learn a lot from that match, especially how to handle pressure situations, how to bowl and set up fields in situations like these. We can learn these things, which could come in handy in the future,’ Mominul said in the virtual media interaction.

Mominul had a good time with the bat in the Chattogram Test, as he brought up his 10th century in the format, but was criticised as a captain for his defensive field-sets on the final day.

Mominul has so far lost four out of five Tests as a captain and is desperate to get back to winning ways.

West Indies skipper Kraigg Brathwaite didn’t want complacency to set in in his side and start anew in the second Test.

‘We got a nice win but we have to start over fresh. We have to buckle down, and can’t be complacent. We have to fight hard again,’ Brathwaite said.

Brathwaite expected a similar pitch in the Dhaka Test and hinted that they might play another spinner.

‘The pitch is quite similar to the first Test in terms of dryness… Looking at the pitch, it will be a thought. [Veerasammy] Permaul is a quality spinner who has experience playing here. We will make the decision tomorrow [today].