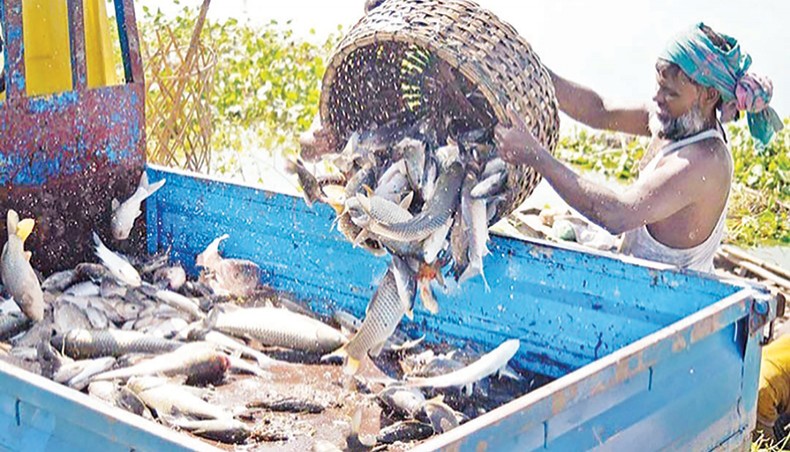 A file photo shows a man putting fish in a pick-up van at a fish farm. The Anti-Corruption Commission has suggested that the National Board of Revenue should properly crosscheck the authenticity of taxpayers’ income from reduced income tax rate enjoying sectors, including fish farming and poultry, to prevent accumulation of illegal assets. — New Age photo

The Anti-Corruption Commission has suggested that the National Board of Revenue should properly crosscheck the authenticity of taxpayers’ income from reduced income tax rate enjoying sectors, including fish farming and poultry, to prevent accumulation of illegal assets.

The commission thinks that the revenue board should check the genuineness of the claimed income from the sectors before accepting that income shown in individual income tax returns, ACC secretary Md Anwar Hossain Howlader said in a letter to NBR chairman Abu Hena Md Rahmatul Muneem.

In the letter sent on January 6, Anwar said that the ACC in the inquiry and investigation process often found that people in their income tax returns showed income from business of miscellaneous goods, stock and livestock feed, poultry, dairy and fishery.

But in many cases ACC officials did not find the authenticity of the income, he said.

‘A blanket acceptance of the claimed income from the sectors creates a scope for making illegally earned income legal,’ the letter said.

The revenue board should take necessary measures, including crosschecking the validity of the income, to end such practices, it said.

The ACC said that in most cases income tax officials accepted the income of taxpayers without proper crosschecking, creating a room for corruption and scope for legalising illegal income of dishonest people.

The ACC had also requested the NBR to examine the ground reality before accepting income figures, shown by taxpayers, from the sectors.

In June 2020, the Fish Farm Owners Association, Bangladesh also demanded that the NBR check the abuse of the facility of tax exemption and proposed a number of steps so that only actual businesspersons get the tax benefit.

The NBR first in 2013 offered the concession against income from fish and poultry sectors and later in early 2015 withdrew the facility following the misuse of the benefit.

The tax administration in July, 2015 reintroduced the tax benefit amid pressure from influential groups of people and offered concession against income from the sectors.

According to the NBR, income up to Tk 20 lakh from the poultry sector is completely tax free while taxpayers pay only 5 per cent tax on income worth Tk 10 lakh after the tax-free limit and 10 per cent income tax on the remaining income.

Tax officials also said that many taxpayers showed a huge amount of income claiming to have earned from the sectors, taking the advantage of lower tax rates and lack of effective mechanism on the NBR side to crosscheck the authenticity of the income.

Taxpayers do not require submitting any effective document or proof against income from the sector, they said, adding that tax officials  also did not have mechanism to disprove the claims.

Though it is not possible to validate the quantity of fish or poultry products and the income from the sectors, tax officials seek documents in favour of the claimed income if the amount is big, said a senior tax official.

But generally the tax benefit is highly misused, he said.