The rich, the poor and climate change 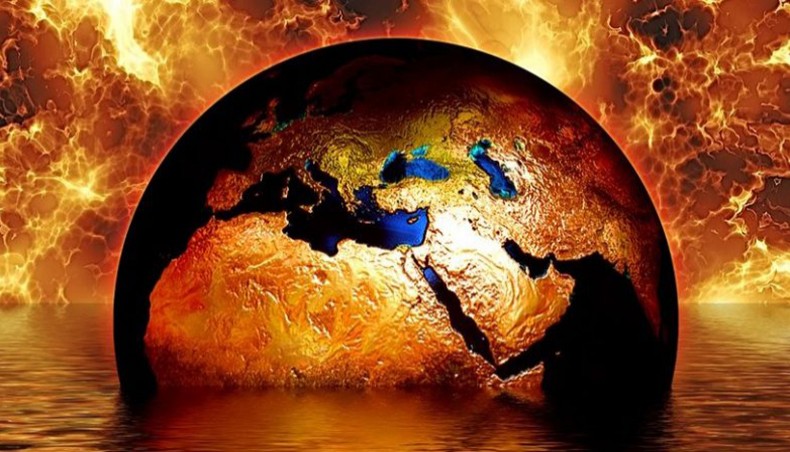 ONLY the most deluded denier can now question that the global climate is dramatically changing and that the chaos is man-made. Extreme weather events — wildfires, drought, intense heat, hurricanes — are becoming more frequent, the impact on ecosystems and biodiversity, populations and infrastructure devastating. Fuelled by the industrialised nations and the lifestyles of the rich, it is developing nations in the global south that are most severely impacted by climate change, with the poorest communities, particularly women and children, hit hardest.

The disruption to weather cycles is caused by global warming (increases in average surface temperature) which results from a buildup of what are commonly called greenhouse gases. Carbon dioxide (CO2), methane (CH4) and nitrous oxide (N2O) trap heat which would otherwise pass out of earth’s atmosphere, resulting in a rise in average ground temperature. Burning fossil fuels (coal, natural gas and oil) is the primary source of emissions, as well as industrial animal agriculture, which is not only a major source of greenhouse gases, but is having a disastrous impact on the environment more broadly, including deforestation, and air and water pollution.

With 28 per cent of the total, China (population 1.4 billion) is the world’s biggest producer of green house gas emissions; however, when measured per capita, it ranks only 47th. China is also one of the world’s biggest investors in renewable energy, and plans to produce 35 per cent of its electricity from renewable sources by 2030. It is the United States (population 328 million) — the second largest overall polluter — that has the highest per capita emissions in the world, and by some margin. Collectively, the top four emitters — China, the United States, the European Union (and the United Kingdom) and India — produced 55 per cent of all green house gas emissions in the last decade.

No matter where they are produced, green house gas emissions effect everyone everywhere. Unsurprisingly the biggest single source, accounting for 73 per cent of emissions, is energy consumption from fossil fuels. A study by The Guardian in 2019, found that over a third of ‘all energy-related carbon dioxide and methane’ emissions since 1965 have been produced by just 20 companies: Chevron, BP, Shell and Exxon top the carbon charts, producing over 10 per cent of the world’s carbon emissions since 1965.

Everyone, particularly everyone in developed countries, contributes to the clogging fog of global emissions, but, in addition to the energy corporations, the group burning colossal pyres of fossil fuels and those who are therefore disproportionately responsible for climate change is the wealthy. Research by Oxfam and the Stockholm Environment Institute, published in September 2020, shows that between 1990 and 2015 (a critical period in the evolution of climate change) when green house gas emissions grew by 60 per cent, and cumulative emissions doubled, the richest 10 per cent on the planet (630 million) were responsible for a staggering 52 per cent of the total. As if this isn’t shocking enough, drilling down on the figures reveals that the ‘richest one percent (63 million people)… were responsible for 15 per cent of global emissions during this time.’

This huge increase in emissions depleted ‘the global 1.5C carbon budget [amount of CO2 the world/country has agreed it can produce to meet warming targets in a particular time period] by nearly a third in those 25 years alone.’ In contrast the poorest 50 per cent on the planet (3.1 billion people), all of whom live in developing countries, used just four per cent of the available carbon budget, producing a mere seven per cent of cumulative emissions.

From growth to social justice

CARBON inequality (differences in expenditure of the agreed carbon budget) reflects and amplifies the broader socio-economic imbalances in the world. In the 1990–2015 period global GDP doubled, wealth and income inequality grew, consumption levels increased, and although millions were raised out of the most dire levels of poverty ($1.90 per day) the income of around half the world’s population remained at less than $5.50 a day.

Even when the poor see some paltry change in their lives, within the present paradigm the main beneficiaries of growth are always the rich; growth intensifies inequality, concentrating wealth, and with it political/corporate power, in the silk-lined pockets of a tiny percentage of the population: a diminishing few, mainly men, predominantly white, controlling more, consuming more, and greedily depleting the global carbon budget at the expense of the rest of the population and future generations.

While the benefits of establishing a carbon budget are debatable, the fact that virtually all of it is eaten up by those responsible for the majority of green house gas emissions is particularly unjust. Greenpeace relates that an average citizen (it’s much higher for the rich) in the US, Canada and Australia emit 150 times the amount of carbon compared to someone in Malawi in Southeast Africa. Adding injury and destruction to insult is the fact that poorer countries and communities, who have done little or nothing to cause climate change, are being most severely impacted by its devastating effects.

The breeding ground for climate injustice and social inequality is the competitive ideology inherent within the global socio-economic order, the values it promotes, the behaviour it encourages. Endless consumerism and perpetual economic growth are essential components, but for green house gas emissions to stop — not reduce, but stop altogether — this crude idea of development, which is a cornerstone of government policies and business plans around the world, must be rejected, and priority must be given to creating environmental responsibility, social justice and unity.

The challenge of the age

IN DECEMBER 2015, 194 countries signed up to the first-ever universal, legally binding global climate change agreement, adopted at the Paris Climate Conference (COP21). The treatise sets out a framework to limit global warming to ‘well below 2°C and pursuing efforts to limit it to 1.5°C.’ To achieve this target countries have established nationally determined contributions, but even though some countries have announced headline-grabbing targets (eg, the EU to reduce emissions by 40 per cent by 2030), in its 2020 Emissions Gap Report, the United Nations states that not only are polices inconsistent with such figures, but that ‘countries must collectively increase their nationally determined contribution ambitions threefold to get on track to a 2°C goal and more than fivefold to get on track to the 1.5°C goal.’

Currently, despite COVID-19-induced economic and trade restrictions in 2020, emissions are climbing at an average rate of 1.3 per cent per year. By the end of 2019, according to Oceanic and Atmospheric Research, emissions had increased 41 per cent since 1990. The resulting threat, to ecosystems, animal habitat and human communities, is huge; in a recent report in Frontiers in Conservation Science, an international group of scientists outline a ‘ghastly future of mass [animal] extinction, declining health and climate-disruption upheavals’ because of collective ignorance and inaction, primarily by government and big business. ‘Future environmental conditions will be far more dangerous than currently believed,’ they state, ‘the scale of the threats… is in fact so great that it is difficult to grasp for even well-informed experts.’

Scientists have been making such warnings for years, but politicians, business leaders, the rich and complacent have routinely ignored them, unprepared to make the necessary sacrifices and changes in approach and behaviour required in order to save the planet. FCS makes clear that dealing with the crisis requires fundamental changes to ‘global capitalism’ as well as education and equality. Under the shadow of COVID-19, governments around the world acted, some more effectively than others, but all responded.

The environmental crisis is a great deal more serious. It is the challenge of the age and demands a UN-coordinated global response. Radical action is needed and urgently, specifically action that brings about changes in behaviour among the principle green house gas emitters: the rich, the energy companies, big business and the consuming masses within developed nations. Environmentally responsible action by individuals, flying less, using less plastic, eating less animal produce, while important, will not deal with climate change. Systemic change is urgently needed, together with a shift in attitudes away from excess to sufficiency.

DissidentVoice.org, February 8. Graham Peebles is an independent writer and charity worker. He set up The Create Trust in 2005 and has run education projects in India, Sri Lanka, Palestine and Ethiopia.