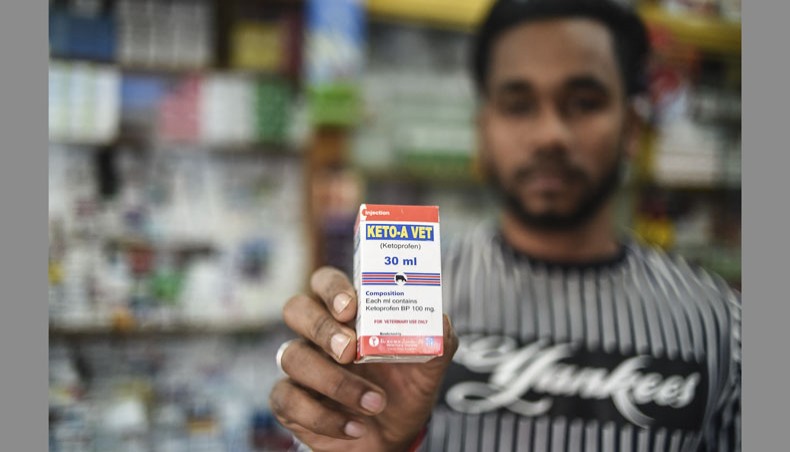 A salesman shows a box containing Ketoprofen medicine at a drugstore on the outskirts of Dhaka on February 9, 2021. — AFP Photo

Bangladesh banned a painkiller used widely by farmers to treat cattle in an effort to save the country’s vultures from extinction, the government said on Tuesday.

Like elsewhere in South Asia, vulture numbers have plummeted in Bangladesh, with the population now estimated at just 260 compared to 50,000 in the 1970s.

The meat of dead cows that have been given Ketoprofen is highly toxic when consumed by the scavenging birds, leading to rapid kidney failure.

In 2017, Bangladesh outlawed the non-steroid anti-inflammatory painkiller in two Vulture Safe Zones, areas designated as protected areas for the birds.

But the new ban on the sale and production of the medicine approved on Monday applies nationwide, Environment Minister Shahab Uddin told AFP.

He insisted that the tens of millions of villagers who rear cows for a living in the impoverished country won’t be impacted by the ban, as local drugmakers have been tasked with producing an alternative to Ketoprofen which isn’t harmful to vultures.

Raquibul Amin, country representative for the International Union for Conservation of Nature, said the decline in vulture numbers was ‘catastrophic’ and called the ban a ‘milestone achievement’.

The drug has also been banned in the southern Indian state of Tamil Nadu.

Sarowar Alam, Bangladesh’s leading vulture expert, said that some drugmakers have already started to produce an alternative, known as meloxicam.