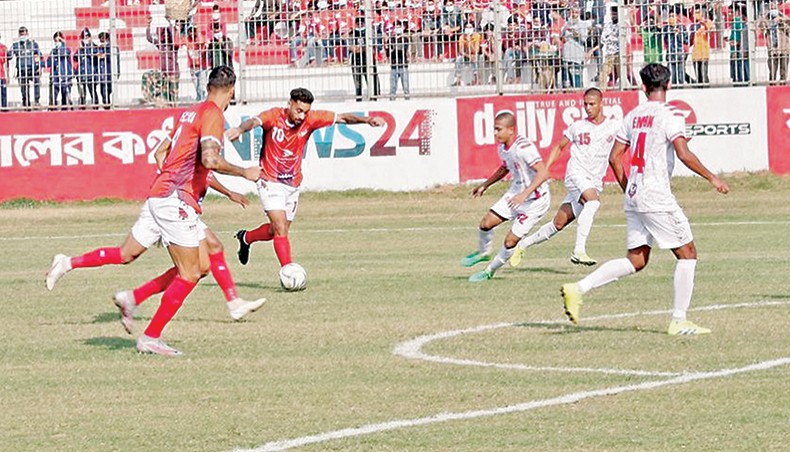 Holders Bashundhara Kings continued their relentless form in the Bangladesh Premier League when they thrashed Muktijoddha Sangsad Krira Chakra 3-0 at the Shaheed Dhirendranath Dutta Stadium in Cumilla on Monday.

In the day’s other match, Chittagong Abahani played out a 2-2 draw against Uttar Baridhara Club at the Bangabandhu National Stadium in Dhaka.

Robson, the second highest scorer with six goals so far in the league, gave his team the lead with a right-footed drive from inside the box in the 10th minute

Becerra doubled the lead in the stoppage time of the first half by with a right-footed grounder from inside the box after a backheel pass by Robson from the top of the box.

Sabuj extended the winning margin in the 75th minute with a tap in ball from goalmouth melee following a cross by Becerra.

Chattogram Abahani dominated the first half and went ahead in the 40th minute when Nixon’s header from inside the box entered the Baridhara net following a free-kick by midfielder Monaem Khan Raju.

Sumon scored the equaliser with a grounder in the 56th minute utilising a through-pass from Arif, who scored Baridhara’s second goal in the 74th minute after snatching the ball from Chattogram Abahani defender Monir Hossain.

Chattogram Abahani narrowly escaped the defeat when on Kawsar scored with his second attempt in the stoppage time of the match.

Midfielder Mannaf Rabbi provided a long pass to Kawsar, who took the shot but Baridhara keeper Mitul Marma fisted the ball before Kawsar taking the shot on the return ball.