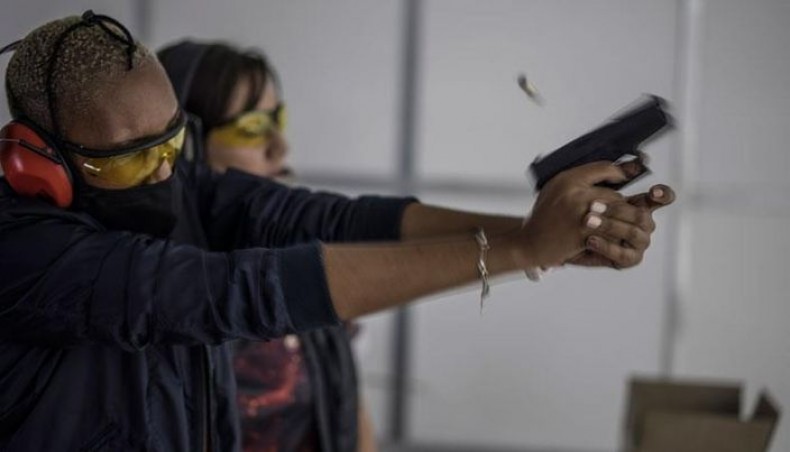 A spent shell leaves from a pistol fired by a South African woman as she takes part in a training organised by the women empowerment group Girls on Fire, in Midrand, on February 7, 2021. — AFP photo

For the dozens of women training at a shooting range near Johannesburg, learning how to use a gun has become a means of protection in a country where a woman is murdered every three hours.

For the first time in her life, Ntando Mthembu holds a revolver in her hands. Without hesitating she fires 10 bullets towards a cardboard target.

Last November Mthembu’s cousin, left alone in a house for several hours, was gang-raped and murdered.

‘Before it happens to me, I want to be prepared,’ said 33-year-old Mthembu.

South Africa is among the most violent countries on Earth, and its homicide rates are constantly increasing.

And the rate of femicide is five times higher than the global average.

‘Women are targets in this country,’ said Matsie Noge, another participant in the training organised by the Gun Owners of South Africa association.

She brought along her 24-year-old daughter to the session, reserved exclusively for women. ‘I should have done it way before, when she was 15,’ Noge added.

‘These trainings have a focus on young black women, statistically most impacted by crimes,’ said Themba Kubheka, who organised the female-only training for GOSA, adding, ‘Every lady here knows a lady that has been raped, robbed, mugged. Each of them has a story about crime in this country.’

For Kubheka, the point of the training is to equip the women with immediate self-defence skills in a dangerous situation.

‘Instead of waiting for help, they need to be able to first respond,’ he said, noting that South African police take an average of 15 minutes to arrive when alerted to a case of assault.

Some 4.5 million guns are used legally in South Africa, with almost the same number again circulating on the black market, according to Gun Free SA, a group which campaigns for arms control.

After shooting three bullets, 32-year-old Nthabiseng Phele rested her revolver on the stand. Her hands were trembling and she was sweating.

‘Holding the gun reminded me of the position I was in, the time I wished I had one,’ she said quietly.

Nine years ago, she was raped in her bedroom by a neighbour who climbed through the window into the house she shared with her parents in the Johannesburg suburbs.

She did not file a criminal complaint against her attacker or receive any support. Her parents admonished her for her own rape, accusing her of bringing shame on the family.

When Phele confided in a friend, he in turn raped her.

South African police receive 110 rape accusations every day. As with the murder rate, those numbers have been rising – 2019 saw a 1.7 per cent increase in sexual assault cases, or 53,293 recorded attacks in total.

Comparing the levels of sexual violence seen in South Africa to those suffered in a country at war, president Cyril Ramphosa announced in late 2019 that tackling the scourge of abuse would be a national priority.

‘There is a dark and heavy shadow across our land. Women and children are under siege,’ he said at the time, describing South Africa as one of ‘the most unsafe places in world to be a woman’.

Today, Phele is living with a boyfriend, and he knows about her past. Together, they have decided to install a safe at home – so that she can keep a gun.