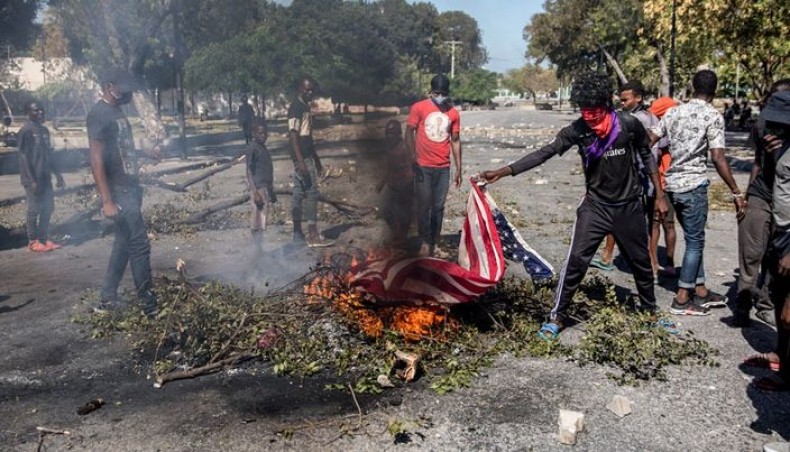 Demonstrators burn an American flag on February 7, 2021 in Port-au-Prince, Haiti during a protest to demand the resignation of president Jovenel Moïse, who seeks to extend his term of office until February 2022, which according to the constitution ends this February 7. — AFP photo

Haitian authorities said Sunday they had foiled an attempt to murder president Jovenel Moise and overthrow the government, as a dispute rages over when his term ends.

The plot was an ‘attempted coup d’etat,’ according to justice minister Rockefeller Vincent, with authorities saying at least 23 people have been arrested, including a top judge and an official from the national police.

‘I thank my head of security at the palace. The goal of these people was to make an attempt on my life,’ Moise said.

‘That plan was aborted,’ he added, speaking on the tarmac at Port-au-Prince airport, accompanied by his wife and prime minister Joseph Jouthe.

Jouthe said plotters had contacted police officials at the presidential palace who were planning to arrest Moise and then help install a ‘transition’ president.

Jouthe added that among the documents was a speech from the judge who had planned on becoming interim leader in a transition government.

But political opposition figures dismissed claims that a coup had been attempted.

‘You don’t carry out a coup with two pistols and three or four rifles,’ lawyer Andre Michel said.

He added that Moise could not claim to have suffered a coup attempt because his presidential term had expired.

Moise has been governing without any checks on his power for the past year and says he remains president until February 7, 2022 — in an interpretation of the constitution

rejected by the opposition, which has led protests asserting that his term ended Sunday.

The US on Friday accepted the president’s claim to power, with State Department spokesman Ned Price saying Washington has urged ‘free and fair legislative elections so that parliament may resume its rightful role.’

The dispute over when the president’s term ends stems from Moise’s original election: he was voted into office in a poll subsequently cancelled on grounds of fraud, and then elected again a year later, in 2016.

After the latter disputed election, demonstrations demanding his resignation intensified in the summer of 2018.

Voting to elect deputies, senators, mayors and local officials should have been held in 2018, but the polls have been delayed, triggering the vacuum in which Moise says he is entitled to stay for another year.

In recent years, angry Haitians have demonstrated against what they call rampant government corruption and unchecked crime by gangs.

In a letter Friday to the United Nations mission in Haiti, several human rights and women’s advocacy groups faulted it for providing technical and logistical support for Moise’s plans to hold a constitutional reform referendum in April followed by presidential and legislative elections.

‘The United Nations must under no circumstances support president Jovenel Moise in his anti-democratic plans,’ the letter stated.