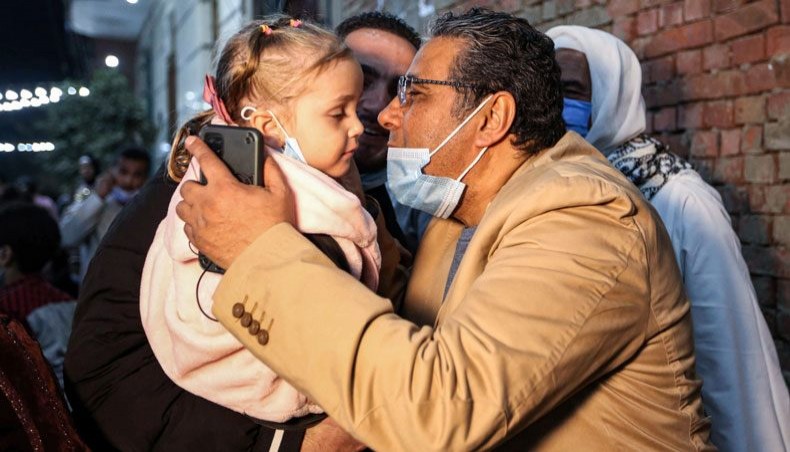 Mahmoud Hussein, an Egyptian national and senior journalist for Qatar-based Al Jazeera Arabic, kisses a child upon his arrival at his family home in the Giza village of Zawyet Abu Musallam, about 30 kilometres south of Egypt's capital Cairo on February 6, 2021 upon his release from detention. -- AFP photo

Mahmoud Hussein, a journalist for Qatar’s Al Jazeera, arrived at his home in greater Cairo on Saturday after four years in an Egyptian jail, an AFP journalist reported, amid thawing relations between the countries.

The 54-year-old Egyptian national was released on Thursday from a Cairo prison, a security source and his daughter Azzahra Hussein confirmed to AFP, but bail conditions at a police station in southern Cairo were still being finalised.

‘His father died before witnessing this moment, he was waiting for it for a long time,’ Hussein’s mother told AFP before her son’s arrival.

Clutching a necklace with a photo of Hussein on it, she was surrounded by throngs of relatives and supporters who had set up colourful lights to celebrate his return.

Neighbours handed out drinks while children lit fireworks as women clapped and ululated. Others rushed to hug him in the small village on the outskirts of Cairo.

Qatar’s Al Jazeera — which had run a daily campaign calling for his liberation — had repeatedly said he was being held ‘without formal charges nor trial’.

According to Egyptian law, detainees can be held in pre-trial detention for up to two years, but authorities regularly prolong the periods.

‘Even though there are bail conditions. Dad is out of the police station, thank God. Freedom to all those oppressed,’ his other daughter based in Paris, Aya Hussein, said on Twitter.

Cairo has been critical of the pan-Arab network’s stance, considering it a mouthpiece for the Muslim Brotherhood.

The group was outlawed after general-turned-president Abdel Fattah al-Sisi led the military overthrow of Islamist Mohamed Morsi in 2013.

‘Al Jazeera Media Network welcomes the news of Mahmoud’s freedom, and believes that no journalist should ever be subjected to what Mahmoud has suffered for the past four years for merely carrying out his profession,’ the Doha-based network said in a statement Saturday.

‘While he was incarcerated, Mahmoud had become a symbol of press freedom across the globe,’ Al Jazeera added.

Three Al Jazeera journalists were previously arrested in 2013, including Australian Peter Greste, drawing international condemnation. They were freed in 2015.

‘This has been a colossal and shameful travesty of justice by Egypt purely for political ends,’ tweeted Greste, hours before Hussein’s arrival home.

Egypt is the world’s worst jailer of journalists behind China and Turkey, according to press freedom group the committee to protect journalists.