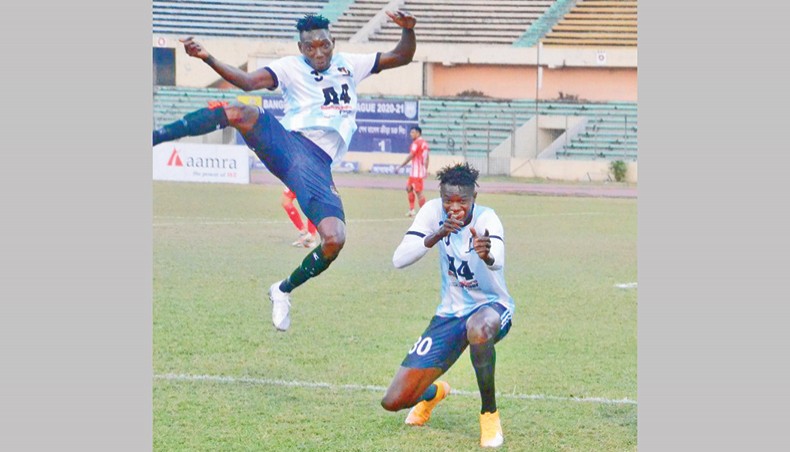 Jamal’s all goals were scored by their Gambian recruits as forwards Pa Omar Jobe scored a brace while Sulayman Sillah and Solomon King Kanform netted the other two goals.

Sillah gave Jamal the lead in the 38th minute when his right-footed drive from the top of the box slipped past Russel keeper Asharaful Islam Rana’s grip to the net.

Jobe made the margin 3-0 scoring once in the stoppage time of the first half and the other one in the 59th minute.

With the brace, Jobe, the only hat-trick maker in the league, regained the top scorer’s spot of the league with seven goals from five matches.

Obi Moneke reduced the margin for Russel in the 69th minute when his header found Jamal’s net following a corner from the left side by Duyshobekov.

Kanform made it 4-1 for Jamal in the 74th minute converting a penalty before Duyshobekov converted another penalty for Russel in the 82nd minute.

In Munshiganj, Nigerian forward Kenneth Ikechukwu scored a brace in the sixth and 59th minute while midfielder Sazzad Hossain scored the other goal in the 70th minute to give Saif their third win in the league.

Arambagh midfielder Omar Faruq scored an equaliser in the eighth minute before Nigerian Christopher Chizoba reduced the gap scoring from a penalty spot in the stoppage time of the match.

With the day’s results, Jamal moved up to second place from fourth, leapfrogging Abahani Limited and Sheikh Russel.