KU: a student’s perspective on the five-point demand 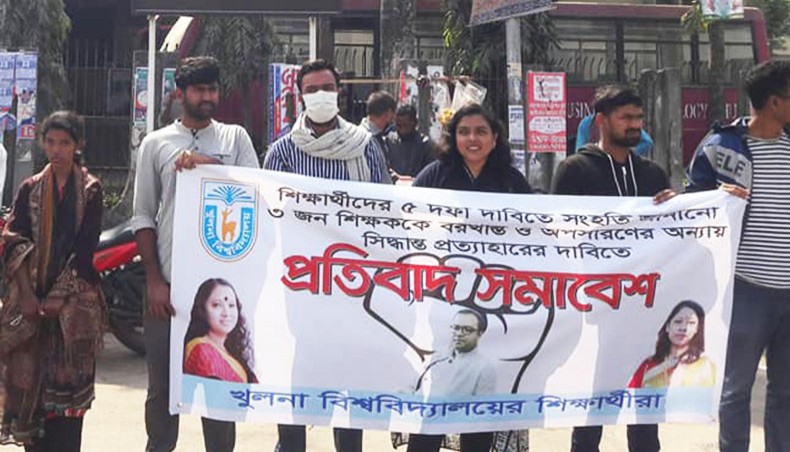 Authorities of Khulna University recently expelled two students for their involvement in a protest during January 2020. When three teachers expressed solidarity with the students, they were also released from their duties. Atid Turja, a student of the university shares his experience and elaborates on their demands

TWO students and three teachers of Khulna University were recently expelled. They were handed down the punishment for their involvement in the protests that took place in the first week of January 2020.

We should discuss elaborately the five-point demands that the protesters were pressing forward because, after a year from the protests, drastic actions are being taken by the authorities against those who were involved.

The first point was a solution to the accommodation. Three decades have already passed from the inauguration of the university, however, a mere 31 per cent of students get accommodation facilities. As a result, most of the students rely on nearby hostels or rented house.

Due to such seat crisis, most of the students do not get seats before their third year. This leads to extra educational expenses as well as a lack of security. However, the university act stipulates that any student who does not get a seat in the residential halls can avail a seat in university-owned houses.

This remains on paper only. That is why the students demanded a solution to the long-standing seat crisis.

The second point was about the excessive increase in tuition fees. A student at the KU has to spend about Tk 20,000 and even more for some disciplines. Tuition fee is Tk 9,000 every year. This costing is very high compared to most of the old universities of Bangladesh.

Tuition fee is increased in regular succession and many cases, it is increased by more than 100 per cent. Moreover, the hike is never adjusted with the inflation rate. The authorities charge the students every year in the name of religious programmes, cultural functions and publication but the students do not get anything substantial in return for their money.

The students’ fourth demand was constructing infrastructure on a priority basis. They demanded to prioritise the construction of classrooms, residential halls, laboratories and medical facilities. A mosque of the university took 12 years to be completed.

The students asked the authorities to cut the stagnation in the construction process and prioritise facilities for the betterment of the students.

Our fifth demand was ensuring student participation in the decision making process that involves the students. We also demanded the abolishment of the university ordinance’s article 17 (Kha) that bars students from protesting or strike for their demands. We also demanded to introduce a chance for a re-examination of exam papers if needed.

We pressed our demands to the authorities on January 1 and 2, 2020. The then dean’s committee, after assessing the demands, verbally promised to accept our demands and take actions accordingly. The authorities took some visible actions like introducing first aid kits, increasing library time, appointing a psychiatrist and temporarily sanctioning a structure for the medical centre.

The main accusation against the two expelled students was misbehaving with two teachers while they were pressing their demands on January 1, 2020. However, the authorities could not produce any proof to the students of the media to substantiate their claim. Neither did they issue any final show-cause letter to the student before the final rustication.

As a result, these two sat for a hunger strike on January 17 that lasted for nine days.

Moreover, the official expels order was deliberately sent to a media house and made public even before the expelled students get the document. This is a serious violation of university rule and defamation of the students.

This made the students believe that the authorities are agenda-driven and that is why they are expelling students for a year-old incident when all the educational institutes of the country are shut for nearly a year now. This is also a strategy of the university authorities to keep their control over the students.

Besides, students are strongly condemning the decision of expelling three teachers who expressed their solidarity with the protesting students.

We think that is incident might be exclusive to Khulna University but all students of the country should feel it their responsibility to raise their voice against this injustice of the university authority.

Atid Turja is a student of Khulna University.