Lanka’s choice of consensus or confrontation 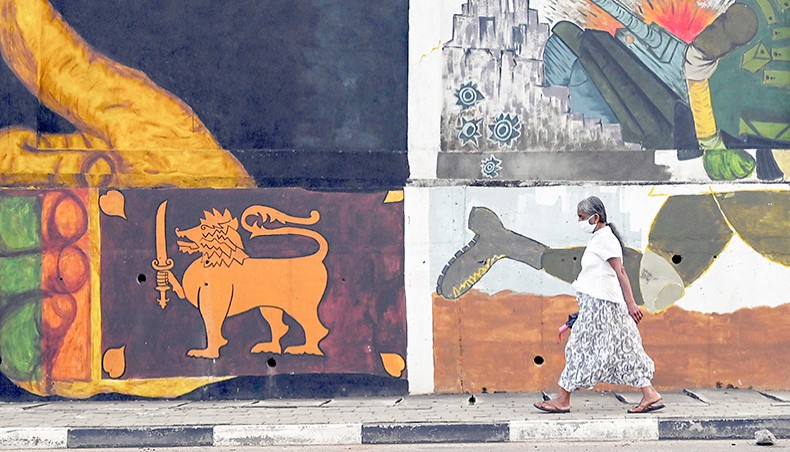 A woman walks past a mural in Colombo on January 26. — Agence France-Presse/Lakruwan Wanniarachchi

THE report on Sri Lanka of the UN High Commissioner for Human Rights has been much stronger than anticipated. It has shattered the belief that Sri Lanka was too important a country in geopolitical terms for the international community to use to prove a point. In her report, the high commissioner has stated that Sri Lanka’s disregard of the commitments that it had made should not become an excuse for other countries to follow suit. The recommendations made in the high commissioner’s report are dangerous. They include a call for targeted economic and travel sanctions on those suspected of human rights violations. The report has recommended the launch of criminal proceedings at the International Criminal Court and an international mechanism to gather evidence. In addition there is an invitation to countries to take independent action against those deemed to be human rights violators on the basis of universal jurisdiction.

This latter recommendation in particular has the possible consequence of opening the floodgates to a whole host of law suits filed by aggrieved individuals and human rights organisations. The high commissioner’s report is therefore a document that cannot be ignored but needs to be responded to with due attention to detail. If the issues raised in it are not dealt with it can place members of the government and security forces vulnerable to having legal cases and summons placed before them while they are in transit in foreign countries. The legal field in relation to universal jurisdiction is particularly well developed in Western countries.

The doctrine of universal jurisdiction allows national courts to try cases of crimes against humanity and war crimes, even if these crimes are not committed in the national territory and even if they are committed by government leaders of other states. The concept is not new, though states have shown an increasing willingness to enlarge the zone of their jurisdiction and to prosecute or extradite those in high places.

ONE of the main cases of the practice of universal jurisdiction comes from Chile. The present High Commissioner for Human Rights, Michelle Bachelet herself comes from Chile where she became president for two terms. Her father Alberto Arturo Miguel Bachelet Martínez was a brigadier general of the Chilean air force. He opposed the 1973 coup of General Augusto Pinochet, and was imprisoned and subject to torture for several months until his death in 1974 while in prison. After ending his 8 year term as president, former president Pinochet got himself appointed as senator for life in Chile with immunity for any crimes he may have committed. The arrest of Augusto Pinochet in London after being indicted by a Spanish magistrate in 1998 signalled changing international norms in the late 1990s.

As a result of the precedents of the Pinochet case, other leaders who were alleged to have committed well-documented crimes have been pursued, including former US secretary of state Henry Kissinger and prime minister Ariel Sharon of Israel. Although an influential and respected person in the US, Henry Kissinger has had to restrict his international travel, because he was wanted in so many jurisdictions either for trial or as a prosecution witness. He served both as secretary of state and national security advisor under the presidential administrations of Richard Nixon and Gerald Ford during the Vietnam War in which large numbers of war crimes took place.

THE UN Human Rights High Commissioner’s report gives its analysis and recommendations under the topics of ‘Emerging threats to reconciliation, accountability and human rights; Militarisation of civilian government functions; Reversal of Constitutional safeguards; Political obstruction of accountability for crimes and human rights violations; Majoritarian and exclusionary rhetoric; Surveillance and intimidation of civil society and shrinking democratic space; New and exacerbated human rights concerns; Assessment of the implementation of resolution 30/1; Transitional justice and confidence-building measures; Impunity in emblematic cases; Conclusions; Recommendations.’ The first indicators of the government’s response to this UN report is that it will respond strongly and show up flaws, biases and weaknesses in the report.

It is likely that the government’s response will be strong as this would be the expectation of the majority of people who voted it to power to put a stop to what they see as excessive international intervention in the internal affairs of the country. However, a strong response to the high commissioner’s report does not preclude the government from reaching an accommodation with the UN Human Rights Council (which is a separate body and consists of 47 countries which have been elected to sit on it) on the issue of a follow up to its resolutions 30/1 of 2015 and 40/1 of 2017. Reaching accommodation with this body would be a better strategy to follow than one of full scale confrontation as occurred during the period 2011-14 which proved to be costly to the country.

It probably will be easier to reach a compromise agreement with the Human Rights Council which consists of the governments of 47 countries. Already some ambassadors of foreign powers who are expected to be playing a lead role in the deliberations that will take place in Geneva have offered conciliatory messages. US ambassador Alaina Teplitz has said in an interview that ‘The support for human rights is absolutely not an effort to bully Sri Lanka or to diminish its sovereignty.’ German ambassador Holger Seubert has tweeted that an ‘Important UNHRC session coming up in Geneva soon. Hoping that a consensual resolution will be possible.’

Not only is human rights only one of the many considerations that governments have, they also consider geopolitics including what is happening in other countries. The latest news is that Myanmar has suffered military coup and democracy icon Aung San Suu Kyi and many of the democratically elected government are under arrest. This is a matter that will necessarily occupy the attention of the Human Rights Council and the secretariat including the high commissioner. Also, unlike in 2012 and 2013 when it lost in voting at the Human Rights Council in 2021 the balance of global power has shifted and its allies China and Russia much more important on the global stage. However, a confrontational strategy would still pit Sri Lanka against powerful countries, and those who have courts that practice universal jurisdiction, and this is best avoided.

THE possibility of a consensual resolution has been a subject of discussion within the government. Foreign secretary, professor Jayanath Colombage, a former admiral of the Sri Lanka navy who was part of a team that designed the cooperative naval strategy with foreign powers that overcame the LTTE at sea, including the US and India, has been quoted as saying that a consensual resolution was under consideration. It is ironic that those who have been in the military may appreciate the value of cooperation over confrontation due to their past experience. This would provide the government with an opportunity to set out its roadmap for reconciliation and obtain international support for it without going to a divisive vote.

The high commissioner’s report has noted that the government’s path to reconciliation will be through the two prongs of reparations and development. The governments of the 47 countries represented in the UN Human Rights Council might be more amendable to this government strategy for reconciliation if they see it is in the process of being implemented. Such a strategy cannot remain only a promise but needs to be seen implemented on the ground right away. While development is a long term process whose visible impact may not be seen immediately, there are several act of reparation that can be done with immediate visibility impacts.

These include increasing the quantum of reparations given to families of the missing from the present sum of Rs 6000 per month, amnesty for LTTE suspects held for over a decade without indictment or trial and resettlement of the war displaced with housing and livelihoods being provided to them. In her recent media interview, US ambassador Alaina Teplitz has also given some suggestions regarding what the international community is looking at. She said that ‘it would be good to see more progress in terms of finalising the last of land returns, in terms of looking at the independent institutions that had been established previously to address the missing, to address the cause of reparation and finally an institution that was not established for looking at the need for some truth telling so that people can kind of examine the past and move ahead.’ Another important symbolic reconciliatory action that can be taken at this time would be to sing the national anthem in Tamil also at the Independence Day celebrations on February 4 particularly in the Tamil majority areas.