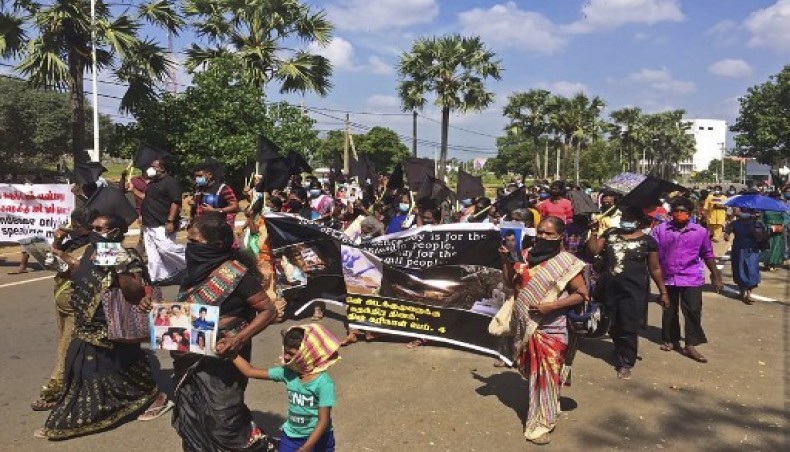 Thousands of Sri Lankan Tamils defied bans to stage protests as the Sinhala-majority government celebrated its independence day with a military parade.

Demonstrators marched in northern and eastern regions to demand the release of prisoners and seek information on thousands of Tamils missing since the end of an ethnic war 11 years ago, Tamil legislator M. A. Sumanthiran said.

‘The reason for this protest walk is to draw attention to the rights of the Tamil-speaking people that have been denied in this country,’ Sumanthiran said.

The legislator for the main opposition Tamil party, the Tamil National Alliance, said the group also wanted to draw attention to the military occupation of private land in the 1972-2009 civil war.

Sri Lanka's Muslims, the second-largest minority after Tamils, joined the protests to demand that the government end the forced cremation of those who die of Covid-19.

Muslims want their dead buried according to Islamic rites, but the government says traditional burials of coronavirus victims could contaminate ground water.

President Gotabaya Rajapaksa, a member of the majority Sinhalese Buddhist community and a key figure in the crushing of Tamil rebels, celebrated the national day at a military parade in the capital Colombo.

‘I govern this country in accordance with Buddhist teachings,’ he said in an address.

‘Every person in this country, irrespective of his or her ethnic or religious identification, has the right to enjoy the freedom as equals under the nation's legal framework.’

Since winning a landslide in November 2019, Rajapaksa has ended the singing of the national anthem in Tamil, started three years earlier.

The war claimed more than 100,000 lives. The bloody finale also brought allegations that up to 40,000 Tamil civilians were killed by troops, a charge the military denies.