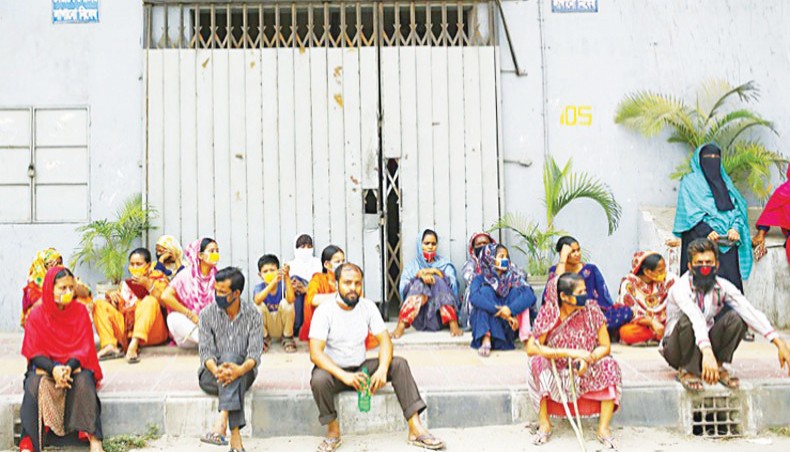 A file photo shows workers protesting against non-payment of wages in front of a readymade garment factory in the capital on April 16. The Bangladesh Garment Manufacturers and Exporters Association has initiated a technical exercise to assess the current exit or insolvency regime and practices to identify necessary reform measures. — New Age photo

The Bangladesh Garment Manufacturers and Exporters Association has initiated a technical exercise to assess the current exit or insolvency regime and practices to identify necessary reform measures.

The trade body took the move to facilitate improvement and reform in Bangladesh’s insolvency law or business exit regime and practices with the particular focus on highlighting improvement relevant to entrepreneurs in the readymade garment sector.

Firms in the sector have come across many business hurdles, including the prospect of voluntary and involuntary exit, due to COVID-19-led shutdown and resultant economic downturn in the main export destinations of apparel products, the association said.

The association also sought participation of different stakeholders, including the National Board of Revenue, in the exercise for effective completion of the assessment.

The BGMEA will form a working group with the participation of stakeholders to ensure reflection of ground realities and context, and to create the necessary awareness and broad-based support for successful implementation of the recommendations the group will make on the policy initiative.

Bangladesh ranked the 154th on resolving insolvency indicator in the overall Ease of Doing Business Report-2020.

Resolving insolvency takes four years in Bangladesh while the recovery rate 29.1 cents on a dollar with a cost of 8 per cent of estate value, the report said.

The working group will advise the BGMEA on technical and practical aspects of exit policies and practices and identify the critical reform issues as well as engage the regulatory authorities and private sector players for successful implementation of reforms and enforcement.

According to a background note prepared by the trade body, insolvency and bankruptcy proceedings in Bangladesh are organised under the Bankruptcy Act-1997 and the act is not very popular and is rarely used.

The bankruptcy regime favours the cause of banks and financial institutions over the debtors facing financial distress, it said.

So far only one company has been declared bankrupt under the law.

Most creditors prefer to use the Money Loan Courts Act-2003 which provides time-bound and faster recovery mechanism.

The BGMEA said that manufacturers in the RMG industry over the years had been facing financial distress arising from a host of factors, including rising production costs and increased competition globally.

The COVID-19 outbreak has exacerbated the hurdles for the industry, with prospects of voluntary and involuntary exit for some firms.

In this context, the working group will act as a forum for discussion on the issues and challenges in the existing legal and regulatory framework as well as on the possible reform measures for the resolution of insolvency and bankruptcy.